Check out this video by Thomas Myers, author of Anatomy Trains. It is a lively explanation of how the connective tissue system uses the principle of tensegrity to greatly enhance its effective power as well as its reliance. Myers is an authority on the myofascial network and his explanations are clear and colorful.

In Chapter 14 “Tensegrity” of Taijiquan: Through the Western Gate, I discuss the importance of this principle:

Chinese martial arts and Chinese healing arts have long emphasized the importance of the connective tissue system in the conduction of internal energy. The Western model has primarily focused on its structural value only. It connects muscle to bone and bone to bone, separates muscles into functional groups, and acts as a shock absorber.

Connective tissue is the unifying web for the physical body. True internal power comes not from muscular development, but by developing the network of sinews (tendons), fascia and membranes, as well as the energy that animates this network. The popular notion that one need only do resistance exercises to increase strength is a dangerous one, particularly when some piece of the support network is strained beyond its capacity. A ligament is torn; a tendon is strained; a joint is dislocated. The weakest link of the chain determines its strength, not the strongest. Increasing muscular strength does not necessarily convert to power unless the support network is upgraded as well.

Taijiquan emphasizes a gradual improvement of the entire system. Power, responsiveness and resilience are aided by a principle employed in architecture: tensegrity. 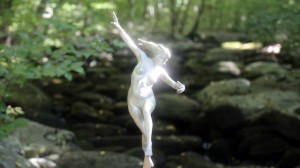 Sometimes this is erroneously communicated as, “Don’t use muscle,” but that is impossible. We will always be “using” some muscle, even if only passively. What is meant is that we don’t want focus on muscular contraction in meeting challenges.

Instead, the emphasis is on expansion of the structure by reaching outward. It is in reaching that we activate the tensegrity of the connective tissue system, and that increases its tensile strength and its capacity to conduct vibrations.

A crude analogy is stretching a rubber band. In its relaxed state, the rubber band doesn’t conduct vibration well. It also doesn’t express much power. However, when you stretch it taut, you can easily see and feel the vibrations. You can also use the stored energy to launch spit wads or to send the rubber band itself at the kid across the room. Similarly, when we let go of the muscular contraction and reach out with an arm, for instance, we stretch the fascia and that stores energy and enhances the transfer of vibrations. It makes the body-mind one unified system, while muscular contraction divides into individual segments. The body-mind translates the vibrations into useful information that can be “read” throughout the whole system.

The trick, of course, is learning how to “reach” while simultaneously relaxing muscular contraction. Since tensing our muscles is something done sub-consciously since we were babies, there is a lot of disbelief that must be overcome in order to put this new program into effect. It will take considerable persistence to put the new program into effect. We have to be absolutely certain that the result is worth the effort.

When reaching is done with the index finger we add another piece to the puzzle: energetic coherence. Now the stored energy in tensegrity becomes more excited and organized. And this further amplifies the power and resilience of the body-mind. I give a demonstration of this in the following video. I deliberately allow myself to assume a posture that must depend on its tensegrity to handle the force directed at it.

Tensegrity is essential to good taijiquan, and that means pointing and reaching at every opportunity. The T’ai Chi Classics say that the energy must be “excited and excitable.” Tensegrity and energetic coherence gives you a good start in doing just that.