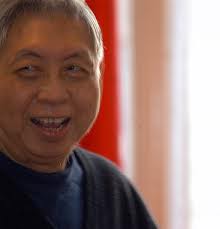 My teacher, Grandmaster William C. C. Chen, would often speak of the “punch of no punch” and the “push of no push.” It was his ironic way of saying that the power of the punch or push didn’t come from crude muscular force. What made it work didn’t translate easily into English. It requires understanding and application of some really nuanced stuff. That stuff is called Jin. And its particular expression in the Taijiquan “Push” posture is called An Jin.

An is one of the four primary Jins that are characteristic of Taijiquan. Those are Peng, Lu, Ji, and An, and are expressed in the Taiji movements of Ward Off, Roll Back, Press, and Push. An is practiced in the unfortunately named “Push.” I say “unfortunately” because “pushing” implies using muscular force to move someone or something away from yourself…and for many students that’s exactly what they try to do. It’s actually more effective when thought of as “reaching” rather than “pushing.”

As paradoxical as that may sound, it is that loving connection that creates the effortless power of the Jin. For most people, thinking about pushing someone immediately triggers a reptile-brain that causes the muscles to tense up and the nervous system to get agitated. “Reaching,” on the other hand, extends to connect rather than shove away. This activates a different part of your nervous system, one that is fertile ground for using Jin.

One thing that makes Taijiquan unique among martial arts is its strong emphasis on Jin as distinct from Li. Li is muscular strength. Jin is a word that doesn’t have a direct English correlate.  I have previously defined Jin as:

Power that results from the integrated use of body and consciousness; physical expression of Qi that is directed by consciousness and based in whole-body energetic connection.

According to Taijiquan scholar, Dr. Yang, Jwing-Ming, the Chinese character for Jin combines Li (muscular power) and Qi (bio-energy): “It can be interpreted as, ‘using the Yi to lead the Li to the (precise) path’…When the nerves are stimulated by the Qi, the muscles will withdraw and expand, initiating the movement.” To have powerful Jin, the Yi must be concentrated to lead the Qi. Yi, in this case, is conscious intentionality. The Yi is the command center that controls the nervous system and the Qi.

I have often presented Li and Jin as a binary choice, such as saying, “Use Jin, not Li.” This is not technically correct. Jin and Li are not in opposition to each other; they are partners. Li provide the physical container that expresses the Qi which is directed by your intentionality, your Yi. You could think of it as a spectrum of power that extends from very substantial muscular force (like lifting a refrigerator) to an insubstantial expression of effortless power (like uprooting someone with a slight touch). Our Gongfu trains us to find the appropriate ratio of Li and Qi in our Jin for the situation. What works in one situation may not work in another.

Jin takes many forms, since the Qi is asked to perform many different functions. For example, the four basic Jins of Taiji express the energy in different ways. Peng (Ward Off) is an expansive, Yang, often “up-and-out” energy. Lu (Roll Back) has a receptive, Yin, “down-and-in” quality. Ji (Press) is a double-Yang directed vector of energy. And An is a complex, circular, “down-and-then-out” tidal wave: Yin, then Yang. These are just short descriptions and don’t limit their virtually limitless applications.

There are many types of Jin beyond these four basic Taijiquan ones. There is “spiraling Jin,” “interrupting Jin,” “sticky Jin,” and “listening Jin,” to name a few. Some may appear quite magical to the untrained eye, if they can be perceived at all. They all contain two elements: Song and Fang.

Learning to move mindfully takes a lot of practice. We are doing something that is “not natural.” Most of our movements are not conscious. They are habitual stress responses. Millions of years of our accumulated genetic heritage has predisposed us to tense up our muscles at the slightest hint of danger. And the danger may be something as simple as standing up or talking. That muscular tension may accompany your sleep. Many have no experience of an alternative. With conscious movement, we re-wire the nervous system to be more calmly efficient.

Song is the Yin aspect of Jin. It establishes a safe foundation that permits the body-mind to release preconscious stress responses. In order to wean ourselves off of our dependence on muscular tension, it must be replaced with something that is more effective. We learn to release the habitual, unconscious muscular tension and trust the underlying support of the connective tissue system, the “Living Matrix.” (I devoted most of Taijiquan: Through the Western Gate to explaining how this is possible and necessary, so I won’t recapitulate that here.) Song allows the Qi to circulate properly to powerfully animate our movements.

This video may be helpful for getting the feeling of Song in your body: Song Kua: Getting the Feeling.

Fang is intentionally reaching, stretching, or extending. This activates the tensegrity of the connective tissue system (CTS), producing a supple, tensile strength. It also heightens the ability of the CTS to conduct energy and transmit communications at hyper speed. Pointing and reaching the index fingers is something I’ve been suggesting for decades to heighten tensegrity and energetic coherence. But you can reach with anything to get the feeling of Fang. (see: “Pointing With Everything”)

Song provides the stable, reliable Yin foundation that allows the rest of the body to let go of extraneous muscular tension. Fang activates the Yang ability to instantly express and direct energy efficiently.

In Part 2 of An Jin: The “Push of No Push,” we’ll explore how to practice these ideas.