In An Jin: The “Push of No Push,” Part 1, we discussed the distinction between Li and Jin, and how Jin is a conscious expression of Qi through Li. There are many way to express Jin in Taijiquan, and one of the four primary Jins is An Jin.

Transforming muscular force into Jin requires both Song (releasing into the support of your structure) and Fang (reaching or extending to establish tensegrity and energetic coherence).

Training An Jin in The Push Movement 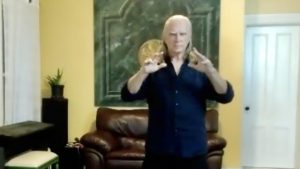 An Jin in Push Movement

I’ve watched and refereed a lot of push hands over the past forty years, and I’m always amazed at how little it resembles the players’ Taiji forms. The limp push I see in most forms is pretty ineffective when executed against a rooted partner, since it has neither Li nor Jin. When that is realized to be ineffective, the “wet noodle Taiji” is often replaced by a schoolyard shoving match. That may be a step up from the magical thinking of the former, but it’s still a far cry from the highly efficient expression of power that is Jin. We need both Song and Fang to make it work.

Training and expressing An Jin in a Push movement starts with what I call the “Three Pillars of Body-Mind-Spirit Integration”: 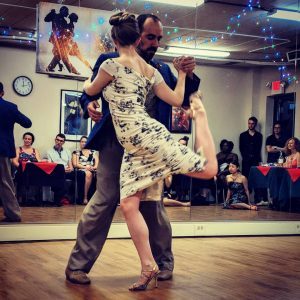 We set the Three Pillars as the first order of business. Doing so establishes a whole-body energetic connection that rouses the Qi and aligns the structure. (See video: Three Pillars Meditation)

An Jin uses the Water Element for its power, like a tidal wave of coherent energy, soft but irresistible. It can be visualized as following a circular path, withdrawing and pressing down, then moving forward and extending out and up. (This is a way to train this Jin. In application, it is much more versatile and is not restricted to any particular shape.) Think of it as pulling a beach ball toward you, all the while pressing down into the water, then direct it forward and letting the built-up water pressure propel it explosively forward and upward.

The Push uses a similar idea to train An Jin. As you withdraw into the rear leg, your Yi leads the Qi in-and-down. You get very Song. This has the effect of pressing down on your partner. Your partner’s preconscious response is usually to resist this heavy weight pressing down and to push away from the earth with the leg muscles, thus breaking the root. Your movement is then forward-and-up with the torso and arms, all the while maintaining Song in the front leg to solidify your root. You follow your partner’s retreating energy with your advance and allow that wave of An Jin to amplify the retreat. You have maintained your connection with the earth so you remain powerfully stable while your partner takes a little ride.

Song engages the root and leads the Qi downward. Fang extends to make the connection with your partner and enhances the tensegrity of your CTS to maintain structure and express the power of the Qi. Song without Fang is limp and collapsed. Fang without Song is unrooted and brittle. They complement each other.

Of course, this description is just a sketch. An is a pretty complex Jin. You have to train the individual components and then put them together in sequence. That’s the Gongfu.

The Gongfu of An Jin

Please remember that the movements in this training regimen are deliberately big. As with other martial arts techniques and energies, once we get the feel of it, we can make it smaller and smaller, without losing effectiveness. The master can hide a very big energy in seemingly small motions. This is the path of Jin: start big, then make it progressively more hidden.

Don’t worry if the Push movement depicted here is not the same as the one in the Taijiquan form you learned. It doesn’t matter. We are training Jin. Once it is understood, it can be applied to just about any form.