To achieve mastery, one seeks the compact. From large circles come small circles; from small circles come no circles. This is what is called, “Unroll it, and it fills the universe; roll it up, and it retires and lies hid in mysteriousness.”

Part 1 of An Jin: The “Push of No Push” discussed how Qi and Li (muscular power) are partners in producing Jin, the effortless power of Taijiquan. The Qi/Li ratio will vary to meet to suit the circumstances. Jin includes Song (releasing muscular tension to rely on the intrinsic support of the connective tissue system) and Fang (intentionally reaching or extending to activate the tensegrity and energetic connection of that system).

An Jin is one of the four basic Jins of Taijiquan (Peng, Lu, Ji, An) and is commonly practiced in the Push movement of a Taiji form. There are lots of ways to practice this Jin. We will discuss here a favorite of mine. An Jin can be a tidal wave of coherent energy, using very little physicality to create a large effect. It follows an oval path. We deliberately train it big to get the hang of it, then make it smaller and smaller. 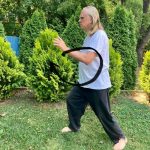 An Jin follows an oval path

Part 2 discussed how to transform the physical movements of the Push to access the effortless power that animates it, the “push of no push.” The Three Pillars of Body-Mind-Spirit Integration” (Energetic Coherence, Central Equilibrium, and Unkinking the Hose) establish the foundation to produce Jin. Song and Fang are expressions of the Three Pillars.

In this post we focus on how to make the movements more compact without losing the Jin that is developed in the larger expressions. Big movements allow us to bring a magnifying glass to all the little components, stuff that might get overlooked otherwise. We familiarize with the feeling of the Jin, not just the physical postures, but also giving ample attention to efficient, economical body mechanics. It is difficult, if not impossible, to do this without maintaining a superconscious state (Body-Mind-Spirit Integration). That is why it is important to establish the Three Pillars at the beginning. It opens the awareness to “knowing without thinking,” and increases access to energy and information that is unavailable in our normal state.

Push with An Jin

There are many way to execute a Push posture in the various versions of Yang style Taiji. I think the one that I demonstrate here (from Yang Cheng Fu’s 13 Original Postures, a form I learned from Yang Fukui) gives the most explicit visual for a Jin that is often quite hidden in other forms. 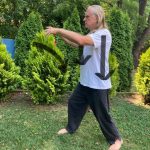 Withdraw and sink into rear leg

I begin by withdrawing into my rear leg by first feeling the earth through the ball of my left foot, setting my knee to establish a stable foundation, then releasing into the Kua of my left leg (Song). Like a child that doesn’t want to be picked up, my body gets heavy, as everything is sinking except the head top (the crown of the head reaches upward throughout the changes).The Jin presses down as it retreats, like pushing down on a beach ball in a swimming pool. My elbows reach downward to draw my hands in and down. 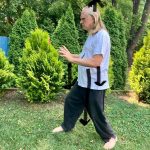 The most Yin point in the movement.

When everything has reached its most Yin point, my weight is substantially in my rear leg.Notice that my butt never goes back past my rear heel. I want to feel the pressure on the ball of my foot. My elbows reach down to open the shoulder joints, and my wrists and hands press down, having reached the most Yin point in the oval. 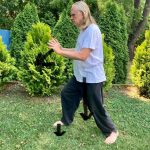 I begin the movement forward by first feeling the earth with the ball of my right foot, then reach forward with my unweighted right knee (to establish position), then release down into my right Kua (Song). My right leg has become the substantial leg now, and everything is still very Song, pressing down. I have begun to transition from the most Yin part by establishing a supporting structure in my right leg. 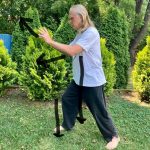 Sink into front Kua as arms extend to express Jin.

The Yang phase is where the Jin is expressed. The oval is nearing completion. I now do something that is counter-intuitive: Instead of pushing away from the earth to use the muscular force in my legs, I double down on Song in my right Kua. That means SINK even more into the right leg as the arms reach out (Fang). The arm movement is initiated by the elbows, followed by the wrists, then the fingers.The shoulders stay relaxed and follow the arms. This is also counter-intuitive for most people, because we love to initiate movement with the shoulders. But any tension in the shoulders will kink the hose (block Qi). Reaching with the elbows (Jou Jin) interrupts the habit of tensing the shoulders. The power comes from establishing tensegrity throughout the whole body, so the tidal wave of An Jin can be expressed without internal resistance.

All the muscular tension that is associated with “shoving” must be replaced with efficient movement that is animated by internal energy. The stiffness of muscular force is replaced by the resilience of the connective tissue system. Training this is Gongfu, diligent effort over time. It takes time to make the necessary physical changes to handle the increase of Qi in the system. We can get glimpses of higher level ability at any point in our practice, but it takes time to learn to trust it. Until then, the body will revert to the programming passed down to us through our DNA, the hard-won lessons of surviving in the jungle.

In the video above, the movement is repeated, this time a little more compact. It can be done over and over, each time getting physically smaller. It can then be practiced in stillness, feeling the Jin but with no external movement. As Chen, Weiming wrote above, “To achieve mastery, one seeks the compact.” We learn to do more with less by moving more mindfully and efficiently. “From large circles come small circles; from small circles come no circles.” Like the prestidigitator who practices a decade to learn how to shuffle a deck properly, we must learn how to first find the Jin in the “large circles.” When we can demonstrate internal power when faced with various challenges, we begin to trust that it will do the job under duress. We can then investigate more nuanced variations and learn to trust them too.

As you become more familiar with the Jin, you can explore its expression in a variety of postures, not just the one depicted here. You can root in your rear leg. You can use one hand. You can practice on a wall or a tree by feeling that unmoving resistance, yet executing the Jin…unconcerned by the result. It can be done as a standing meditation, feeling each step into the body without muscular tension.

Please let me know how this goes for you. I’d love to hear from you, and I’m happy to answer any questions you might have.