Here’s another piece from my new book. Love to hear your thoughts.

Please don’t change the channel! This is cool stuff, despite the dry title. I’ll try to keep it lively.

Aristotle was a student at Plato’s Academy and was himself the tutor of Alexander of Macedonia, who had “1. Conquer the world” atop his bucket list. Aristotle was renowned for many things, but probably his biggest influence came from his codified system of logic. He was the patron saint of modern science because he thought that knowledge comes from observing things, rather than just thinking about them.

Aristotelian logic became the foundation of the scientific method. It fits in neatly with our subject-predicate-object language structure and is the lingua franca of the Western Gate. 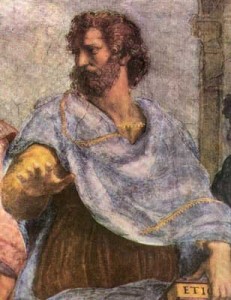 Aristotle from The School of Athens

Korzybski explains that Aristotle based his logic on the assumption that A=A. That is, that each thing has a unique identity and that it equals itself.

This is common sense. A chair is a chair. An apple is an apple. A thing is itself in every way.

From this premise, we get that anything is either A or not A, and that something cannot be both A and not A. An apple is an apple; it is not a chair. It can’t be both an apple and a chair.

This is also common sense. It is how we identify things as discreet, separate entities that we can compare with other things. We can then make categories of things that are similar and contrast them to things that don’t fit in those categories.

This is how the It-mind organizes information. But is it true?

Not if we accept Korzybski’s statement that, “The map is not the territory it represents.” Then, A is not A. No two things are identical in every way. No object is the same as it was at some point in the past, even if the changes are seemingly irrelevant. Few people will argue that an ice cube placed in a hot frying pan is the ‘same’ in every way but a few seconds later. In its interactions with its (rather warm) environment, it changes. While it may be useful to consider it the ‘same’ ice cube for a short while, that becomes impractical when the cube turns to water and then to water vapor.

Is an apple sitting in a fruit basket the ‘same’ apple a minute later? How about a day? A month? How about you? Are you identical to what you were a minute ago? A week? A year?

We humans experience a mysterious continuity of personal identity and it has baffled us for eons. You are the same You that You have always been. But in every objective way, we change moment to moment. In the time it takes you to read this sentence, your body will discard and replace over ten million cells…six hundred billion in a day. Your autonomic nervous system has one foot on the gas and one on the brake and alternates faster than a New York City cab driver. Your thoughts and emotions eddy and swirl, peak and dive throughout your day. Your body-mind is an agglomeration of living entities that are in constant flux. There is no ‘thing’ that you are…yet there You are nonetheless.

Who would know the world
must go beyond names.
Nameless, all things begin.
Named, all things are born.

There is no story without naming. There are no objects. When we name, we focus on similarities and ignore differences. And there are always more differences than similarities, if you look closely enough. To have any kind of story we ignore for the moment that the cat in my lap is quite a bit different from the ‘same’ cat ten minutes ago. This is a necessary step in organizing information and the only way we can get anything done.

Aristotelian logic is helpful in this way. Rat poison remains a poison one day to the next. A=A. It’s not a good idea to eat it in any quantity. Rat poison is not sugar. Anything is either A or not A. Some people will label sugar a poison, but that does not make them equivalent. The differences far outweigh the similarities. Something cannot be both A and not A.

Thus we bring order into the Mystery of What-Is. Canned goods are aisle five and dairy is aisle fourteen. Canned dairy is aisle five. The labels are our maps to help us locate stuff. They are helpful as long as we remember “the map is not the territory it represents.”

One step beyond the Western Gate, and we need new maps. The compass of aristotelian logic spins wildly as it seeks its magnetic north. Non-aristotelian logic complements common sense like quantum physics and relativity complement the mechanical worldview of Newton, Maxwell, and Kelvin.

A is not A. Fixed objects are replaced by fluid processes. Multi-valued orientation supplants either/or, two-valued thinking. Something can only be properly evaluated by awareness of its context and environment. A statement may be true and not-true at the same time.

Any substance is a poison when ingested in sufficient quantities, so sugar can be called a poison and not a poison. In quantum physics, a photon is both a particle and a wave. It has location and non-location, mass and no mass. Schroedinger’s cat is both alive and dead. Each human has both male and female qualities.

Still, while non-aristotelian thinking may be a more accurate means of navigating What-Is, it is also comforting to know that canned goods are still in aisle five.