Chapter 9 “Coherent Energy” from Taijiquan: Through the Western Gate (Part 1)

I have been reviewing Taijiquan: Through the Western Gate lately. That book was written fifteen years ago, and it’s time for a sequel to record some of the discoveries made since then. (Many have appeared in blog posts.) So I’ve been going over TTWG to get a feel for my mindset when I wrote it.

When I reread Chapter 9 “Coherent Energy,” I was stricken by how crucial the information it contains is to all my research and development since then. So I thought I’d publish it in a blog to get it back into the conversation. It’s a long one, so I broke it down into sections for your convenience.

You may need to refer to the book for some background about some references, but much of it stands on its own.

I hope you enjoy. 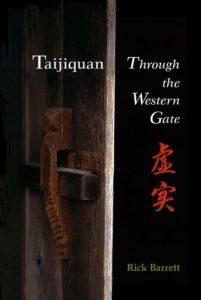 A truly free individual is a coherent being that lives life fully and spontaneously, without fragmentation or hesitation.

How to move beyond just feeling energy to actually put it to work? Even energy-sensitive individuals can be puzzled by a demonstration such as one finger holding back a powerful fist, or even more so by the seemingly effortless Waysun Liao feat as described in Chapter 1.

Certainly the amount of qi present has an effect, but the quality is also important. Just as an electrical or electronic device requires that the qualities of its power source (voltage, amperage, phase, impedance, and the like) be appropriate to the device, the human body needs energies of various kinds to function optimally. The energy needed to lift a barrel is of a different sort than that which arises when a mother cuddles an infant. The intentions of living beings shape and inform energy and give it quality. When the body’s various energies are functioning together at a high level of harmonious integration (as displayed by athletes in the Zone) we can say the energy is coherent.

To understand energetic coherence it must be remembered that qi is living energy, energy that animates a living organism. It is different from the lifeless forces envisioned by Newtonian science. While both may be considered ultimately to arise from the same metaphysical source, the electricity that corresponds to my beating heart is quite different from the electricity that powers my computer. Both forms may be described as the movement of electrons, but they have very different qualities.

Bio-electricity, the electricity of a living organism, is but one of the more substantial aspects of qi, and has been measured over a century. The magnetic fields of the body are considerably less substantial, but can be felt by anyone who follows the appropriate injunctions to amplify them (such as the exercises in the last chapter). Infrared radiation (in the form of heat) can also be produced rather easily and projected through the hands. Other form, like visible light and gamma rays, are present in the body but only register on sensitive equipment.

What differentiates bioenergy from the more mechanical forms of energy is its intimate relationship with consciousness. Bioenergy and consciousness are mutually dependent. An internal art like taijiquan helps the individual to become more aware of what happens in his body/mind at a fundamental level. By doing so he learns to direct this process so as to amplify his energy and remove impediments to its efficient flow.

Even if you don’t know it is what you are doing, the action of patiently directing your attention to a body part so as to consciously move it, or even hold it still, amplifies and organizes the energy in that area. It becomes “intelligent” energy. If you relax your own muscular resistance to the movement, your energy magnifies even more. Other martial arts—as well as sports, body/mind practices and dance—use conscious movement as a tool in training, but taijiquan makes it a central pillar of the art by intentionally developing the little known power of qi.

Body/mind consciousness varies from moment to moment. Success in any endeavor is related to the ability to place and hold attention. Inability to focus on a task can disqualify you before you start. An Olympic weightlifter knows that if there is any doubt in his mind about lifting a particular amount, he might as well walk away. Free-throw shooting in basketball is said to be 90% mental. The same is true of putting in golf. Once you have practiced the physical mechanics thousands of times, all other variables are reduced in importance compared your ability to bring your body/mind consciousness to the task at hand.

An athlete is said to “choke” when he is so distracted that he can’t perform when it matters most. Many try to avoid such stressful situations, but players who frequently visit the Zone delight in this challenge. They know that success and failure balance on a razor’s edge and they feed off that tension. In contrast, most of us mere mortals have long been baffled by the ability of great athletes to hit the big shot with the game on the line. Something happens between conception and execution that makes results unpredictable.

Qi may be a missing link. Qi awareness can significantly improve physical and mental performance, as well as healing ability. Successful athletes and martial artists intuit the appropriate energy to get the job done, even if they can’t explain what it is they are doing. Others stare at the chasm that separates them from their goals, unable to find the energy to bridge it.

Taijiquan has known for centuries that qi occupies the ground between body and mind and is essential for any action. Qi is the interface between the conceptual levels of mind and the action levels of body. It is more substantial than mind and less so than body. The body does not easily understand the rarefied symbolic language of the mind. Mind in turn is often baffled by seen and unseen physical factors. A translator is needed, and qi serves. Taijiquan recognizes that it is not enough just to know that energy is present at all times and in all activities, but that it can also be trained to work more efficiently with the physical and mental functions.