Chapter 9 “Coherent Energy” from Taijiquan: Through the Western Gate (Part 3)

Chapter 9 “Coherent Energy” from Taijiquan: Through the Western Gate (Part 3) 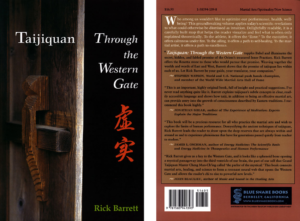 Coherence offers a possible explanation for taijiquan’s traditional claims of enhancing health and longevity. Scientific interest in the art is too young to support or deny these claims, but anecdotal evidence abounds.

What is unmistakable is the vitality of elderly taijiquan practitioners. Many, like masters Cheng Man-Ch’ing and T.T. Liang, claim that their practice was their salvation from chronic illness. In doctor-poor areas of China, it was common practice to send patients off with a prescription for qigong or taijiquan, knowing that any further treatment would work better in a more coherent body.

Entropy is inversely proportional to efficiency and harmony within any system.

The laws of thermodynamics hold that once energy is used to do work, it loses something. It cannot be used again in the same way. It becomes more chaotic. This is entropy. It is often expressed as heat. A machine that throws off too much heat is inefficient. An ordinary light bulb expends more energy in heat than light.

Some scientists theorize that evolution is the process of life becoming more complex to be able to more efficiently claim the energy that is becoming less available. Schröedinger called this movement toward greater efficiency negative entropy, saying

The essential thing in metabolism is that the organism succeeds in freeing itself from all the entropy it cannot help producing while alive. (14)

…stored mobilizable energy in a space-time structured system…Energy flow is of no consequence unless the energy can be trapped and stored within the system where it circulates to do work before dissipating. (14) 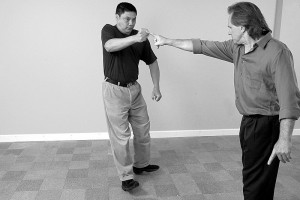 One finger push while coherent

At the material level, entropy either increases or stays the same. The human body will wear out and age proportionally to the entropy present. This changes when consciousness acts to improve organization and functioning. If the body operates more efficiently and less energy leaks out, entropy is slowed.

This is observable in any martial artist or athlete. Performers with higher-level skills, being more coherent, show less strain in accomplishing the same tasks that cause most of us to struggle and heat up. There is less entropy. An organism that leaks less energy is likely to live a longer, healthier life than one that dissipates much energy.

Taijiquan and qigong movements are highly coherent. Consciousness is used to, in Ho’s terms, “trap and store” energy that is appropriate for the individual. Qi is accumulated and circulated to maintain energy fullness and balance throughout the body, making the body much more responsive. Ho explains

Coordinated action of all the parts depends on rapid intercommunication throughout the system. The organism is a system of “excitable media”, or excitable cells and tissues poised to respond specifically and disproportionately (i.e., nonlinearly) to weak signals because of the large amount of energy stored, which can thus amplify the weak signal into macroscopic action. (14)

Thus any practice that amplifies the qi of the body has the potential of enhancing its performance and responsiveness. The practice of developing and circulating qi consciously and harmoniously assists the process that is already occurring quite naturally in the body/mind. Increasing the level and flow of qi in the body permits greater coherence, resulting in reduced entropy.

Human bodies with their trillions of cells are almost unimaginably complex. Each cell is composed of billions of molecules. The chemical reactions occurring in each are also numerous and must be coordinated to happen in the right sequences. Yet miraculously, communication between the various systems in a healthy body is almost instantaneous.

For example, coordination of the limbs and fingers while playing a piano occurs with little conscious thought. There is just not enough time for perceptions to reach the brain, be interpreted, and then send signals to activate the muscles. Each of the pianist’s fingers is instantly translating the musical notation into actions that are imbued with emotion and nuance. Beyond that, astronomical numbers of other processes are occurring throughout her body. Oschman says the computational power in one finger exceeds the combined power of all the world’s computers. Respiration, enzymatic regulation, endocrine functioning, metabolism, immune system action, and cell regeneration are but a few of the myriad activities that we take for granted. Each cell is a computer that is responsible for handling the chaos of energies that it encounters, and creates order that is consistent not only within its own boundaries, but which resonates with all other cells in a harmonious manner.

This is a high level of coherence. The pianist might even be subject to very non-coherent states when she is not playing. She may be unhappy, physically ill, in serious pain, or going through a tough divorce, but while she’s playing Rachmaninoff’s Third Concerto none of that matters. She surfs a wave of coherence.

This is a function of consciousness. She is so focused on her activity that she goes into resonance with it. Everything organizes around this creation. For the moment, she does not consider how fragmented and dissonant are the other aspects of her life. All that matters is the music.

She is experiencing a state of wholeness, that is, she is functioning in an integrated, undivided way. While still a composite of many parts, and simultaneously a part of greater things, her attention is not on that. She is immersed in the music…it is flowing…and in that moment she is whole. That state of wholeness allows her to access abilities and information that are unavailable in her more fragmented states of consciousness. She is functioning at a high level of efficiency, freed momentarily from the forces that ordinarily pull her in many directions.

This is the Zone. Her body/mind functions synergistically, allowing new qualities to emerge spontaneously that may not be predictable from her ordinary state. The narrow analytical function of her ordinary consciousness, her vijnana mind, is transcended. Thoughts arise when and if needed, not linearly and methodically. She just knows what to do. She has entered a transrational state of consciousness and has access to much more of her body/mind than in normal consciousness.

Those in the Zone are not encumbered by equivocation and uncertainty. They just DO. There is a time for information gathering and weighing of options during the training and preparation phases. That time will come again after the actions have been taken. They can then analyze what works and what doesn’t, a normal part of the learning process. For the moment, however, attention is focused on the immediate experience to such a degree that ordinary barriers and divisions are transcended.

All Life is Coherent

All life is coherent. The degree of coherence varies widely.

Simply by being alive, an organism must have some coherence. It has parts that function as a whole. Organisms that function more coherently in their environment tend to survive better. They resonate with their surroundings and thus can claim the energy needed to survive and propagate.

Peak performance, like total health, is a whole-system phenomenon, and requires the integrated participation of all of the organs, tissues, cells, and molecules of the body.(28)

We have an archetypal memory of the state of wholeness. When we depart from wholeness, we hunger for its return. Huston Smith says, “Continuity and equilibrium exist before discontinuity and crisis; they are more real than these latter and incomparably more precious.” (34)

The joke is that we are always whole…and we are always parts. Wilber uses the term holon. Everything is part of something greater as well as an aggregation of smaller parts. Whether “wholeness” or “partness” is emphasized is a function of consciousness. Analysis is examining the components of something. We sometimes forget that any thing is also whole unto itself. No matter what condition something or someone is in, it is complete in the moment.

I can’t point to wholeness as a thing, yet I know when it is there. The quality of wholeness is insubstantial. If I try to analyze it (focus on its parts), wholeness disappears from view. All I can see are components. I have lost the essential quality that binds all these parts into a single identity. Analysis is essential to learning. Wholeness is essential to action. We all know the dangers of over-analysis, and when we become paralyzed by choice. There comes a time in any situation where further differentiation is counter-productive. One must then address the situation in its wholeness and act.

The different levels of organization in individual humans can be described in terms of holons. Wholeness expands as each level is considered. The physical body transcends and includes its component matter. Cells contain molecules. Molecules don’t contain cells. Qi transcends and includes body and matter. A living body with lots of qi is certainly much more than a dead body absent its qi. There are various stages of mental development, but each requires matter, body and energy to manifest. Mind includes those three levels, but transcends them as well. The soul level is beyond the mental. It is transrational and transpersonal, yet is not completely non-dual. Spirit is non-dual; it transcends and includes matter, body, qi, mind, and soul.

Failure to recognize that we are holons and that our parts are organized to expanding levels of wholeness can create unnecessary and self-destructive internal conflicts. One level of being is pitted against another, like “emotions vs. intellect” or “spiritual nature vs. animal nature.” This generates harmful, counter-productive non-coherence that sustains an illusory state of a world in conflict.

Coherence is wholeness. Returning to a state of physiological coherence is an important first step in resolving difficulties of all sorts. Later we will see how energetic coherence can transform-physically, mentally, and spiritually.

Finding what it means to be coherent in our own selves is perhaps the most important step we can take to forward our personal evolution. It is what reminds us of our wholeness, and the wholeness that pervades all of creation. When we experience a high level of coherence and learn to identify it in ourselves, this permits entrainment of our own bioenergetic fields to the larger fields that surround us.