I apologize for not posting for a few weeks. I am in the home stretch on my new book and that has gobbled up all my writing RAM right now. It is targeted for this summer. Fingers crossed! More information to be posted soon. 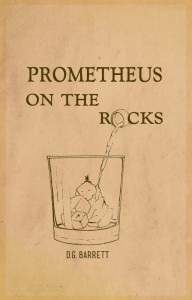 However, I have come up for air for a moment to make an important announcement: Prometheus on the Rocks, by D. G. Barrett is now available on Amazon!

Those of you fortunate enough to have met the man will recognize the acerbic wit and laser insights that make Prometheus a joy to read.

The book is also illustrated by the multi-talented Micaela Barrett! Be still, my heart! Together they have created an absolute gem.

Prometheus toggles between the mythic Titan dealing with the challenges of being nailed to a rock for eternity and dealing with unwelcome daily visit from an eagle sent to eat his liver, and the challenges of a young man in Portland, Oregon whose liver is being consumed by cheap liquor and some questionable life choices.

“More than just a modern reimagining, Prometheus on the Rocks uses mythology as a departure point to explore the experience of personality, and the individual’s relationship to Society.

Give yourself a treat and check this one out.

Here is a sample from Prometheus on the Rocks: (For mature audiences.)

After three more Jack & Cokes our young hero was drenched in the love of whiskey and engulfed in the magic of all-nude girls. The realm of possibilities lay spread-eagle in front of him and was winking seductively in his direction. It was around this time that Isis reappeared.

Draped in a golden cloak that flowed from her shoulders like a cascading waterfall of regality; hair black as the empty time between restful dreams; skin the color of warm, fertile earth and delicate sandy beaches; eyes that were welcoming pools of dangerous depth. Our young hero’s mind flashed with this vision of incomprehensible beauty for a moment before he regained his perception of reality – or lost it again, depending on your point of view. On the stage stood the young woman with the piercing green eyes who had first caught his attention as she circumnavigated the brass pole at the center of this tiny universe of neon and lust.

In reality, the slender dancer that had taken the stage possessed a noble bearing and platform heels that made her seem taller than she truly was. Her hair was a deep black, a color most likely from a box that wore the words ‘nocturnal desires’ or ‘licorice seduction’. Her skin was a robust and healthy shade of pale, distinguishable from lesser shades of pale only by people who have spent a good deal of time in the Pacific Northwest. She wore a suggestion of gold Lycra over the areas she intended – albeit temporarily – to be shrouded in mystery, and a tattoo of a sycamore tree grew tall and strong across most of her upper back. As her first song began, her eyes cast a net over the evening spirit of our young hero and with a beckoning finger she reeled him towards the stage.

He took a seat directly at the center of the makeshift alter, too preoccupied to realize that he was the only worshiper at the rail.

“And how are you tonight, Prometheus?” she said, her voice smokey yet firm, subtle yet authoritative, somehow consciously relaxing and yet primordially . . . encouraging.

“Indeed you are” came her response, almost a hiss yet almost a purr. Her eyes stayed locked with his as she slowly slid her legs apart behind her and lowered herself into an edited upward-facing-dog. Closing her eyes to conjure up a sensuous mix of intention and invocation, she turned, lowered herself until she could easily roll onto her back and then proceeded to arch and quiver until she was kneeling with her forehead pressed against the brass pole. In a moment that seemed to exist outside of time, sound and gravity, she turned her head and opened her eyes to stare directly into those of our young Prometheus.

“The money in your pocket won’t run out until you start believing that it will. Do you trust me, Prometheus?” she said as she made her way back across the stage toward him.

“How could I not?” responded our young Prometheus,

indiscriminately pulling bills from his pocket.

“Good” she purred, her movements reminding him of a thousand quiet and gentle things that he had long since half-forgotten. “So, what brings you out tonight?”

It took him a moment to recall that breathing is required for speech as he watched the first whisper of gold Lycra fall to the wayside of his personal history, reducing the amount of material obstructing his view of her divine tits by a full one-hundred percent – give or take a reasonable margin of error.

“ . . . Romance . . .” was his whimsical reply, his face taking on a foolish and irresponsible grin.

“Romance?” she echoed, her eyebrow lifting slightly as though she could laugh or yawn or slap him across the face.

“The search for unknowable mysteries still left in the universe, beyond the sweaty grasp of men.”

“Beyond the grasp of men?” she scoffed. “Certainly.” As if to make her point solely through action, she executed a handstand, which she followed by lasciviously entwining her legs around the brass pole and pulling herself up off the ground using naught but her curvaceous legs, discrete abdominals and the will of a half-naked jungle cat. “Beyond the grasp of women, now that’s another question entirely” she mused, subtly suggesting an internal laugh as she suspended herself three feet above the ground on the strength of her thighs, and issued a wry wink to her noticeably stupefied audience of one.

“I . . . I just want to know that there’s something out there worth . . . looking for” managed our young Prometheus as she performed an equally daring dismount. The stack of bills in front of him had risen steadily and was bordering on Babel in its hubris.

She was standing directly in front of him; a tiny, triangular acre of gold Lycra poised not six inches from the tip of his nose, slowly and rhythmically pumping back and forth in time with the music that was now barely audible over the hum and hymn of anticipation.

“You’re cute” she said “but if the mysteries were all revealed, then where’d be the fun in that?”. As if in answer to a hundred fumbling prayers the two bows formerly resting upon her hips came undone with a slight movement of her fingers, and the last acre of Lycra made its way into the past.

He sat gazing unabashedly at the most beautiful person he had ever laid eyes upon; enthralling, arousing, scintillating and terrifying. Her final song reaching its final notes, Isis leaned forward, kissed him on the forehead like a nanny tucking a child into bed, casually swept up the precarious pile of cash and walked off into the rooms beyond.