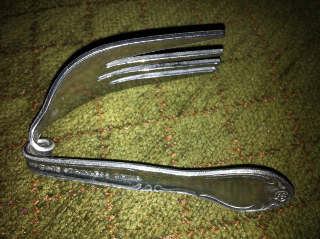 One of my most memorable learning experiences came in 2006.  In September 2005 Susan Jordan and David Zimmerman had blown my mind by showing me a box full of flatware that had been twisted into odd shapes.  They explained that these were the by-products of an intense seminar they had attended with Jack Houck.

He is a former aerospace engineer who became fascinated with using intention to bring about changes in matter—particularly forks and spoons (these are good tools for most of us because they are cheap, readily available, and give instant feedback). The bends in the flatware were interesting because they were spirals and curlicues and showed no signs of  stress that comes with mechanically bending metal.  I asked if they could teach that to a group in less than an hour and they said they’d give it try.

So I kept it under my hat until the next Tai Chi Alchemy.  I didn’t want people to bring their expectations and baggage.  David, Susan, and their daughter Arwen were the only ones in the 70 plus group that had done it before and I was eager to see how the group would deal with the challenge.  It was well outside our comfort zone.

David, Susan, and Arwen gave a their spiel and then dumped a bag of 500 more or less identical stainless steel forks in a pile.  We divided up into groups of 8-10.  My group started slow.  Mike Casto and Ric Meyers were first to produce results, followed by other members of their group.  A good ten minutes passed before anyone in our group was able to get any response from our recalcitrant forks.  This video (taken by Wee Nancy Cervenka) recorded the first stages of the process.

After about ten minutes of puzzled attempts a wave suddenly swept the room.  Like a string of firecrackers.  “I did it!” One after another.  Bob Messinger was in an adjacent group.  He leaned over and showed me his bent fork, his face lit up like a Christmas tree.  Without a word I instantly got the joke.   Direct transmission.  My fork suddenly felt like a soft wire coat hanger and became ridiculously easy to bend…for a few seconds.  Then it became rigid again.  Very strange.  I tried another.  Same thing.  I showed it to the rest of my group, and each went from non-bender to bender, as elated as I was.

As I became more confident, I made more complicated twists and extended the malleable time as much as I could.  The following video shows some of the wild moments of first discovery.  As we became more proficient, even less effort was needed to accomplish more. All 500 forks were twisted in less than an hour.

So what is happening here?  A major shift occurs when that fork starts to melt in your hands.  Like one of Dali’s clocks. I became quite giddy.  It’s like if you’re struggling to push a refrigerator uphill and suddenly you can move it easily with one finger.  And that piece of metal suddenly becomes responsive to your intention.

When I started the process, the fork was an object in my hands.  There was a separation between me and it, and I was trying to use energy to bring about a change in it.  Your basic subject/object deal. I directed my intention and then let go of it, but the fork remained rigid.

Things changed when I went into resonance with the fork. It sounds weird, but we became partners in the bending. It worked best when I asked it if it was ready to change. A sweet spot appeared.

Athletes are familiar with the sweet spot of a bat, tennis racquet, or golf club. That’s the location on your stick where maximum power and control can be found. In this case, it’s like a vibrational sweet spot. We have all heard about how the right sound (vibration) can start and avalanche or shatter a wine glass. The biblical Joshua is said to have brought down the walls of Jericho with the sound of his priests’ rams’ horns and the war cries of his army. (Ok. I’m doubtful on that last one.)

My sense is that when the fork bending worked best for me, I was able to engage the fork in a high degree of resonance revealing a vibrational sweet spot that briefly softened the metal. This working hypothesis has helped me since then in my martial arts and in my healing practice.

More gets done with less.

Tai Chi Alchemy XVII will be held September 16-18 at the Sedona Mago Garden. All are welcome. For an overview of TCA XVI click: TCA Report XVI