Gongfu is doing something diligently over time. A gongfu involves time because true learning is not just adopting a new set of beliefs. It reaches down to the cellular level, and re-writes the operating code of your body-mind. It takes time to implement structural changes in the body-mind.

At its simplest, gongfu is Thinking to Feeling to Being. (Joe Dispenza talks about this triad in his delightful book, Breaking the Habit of Being Yourself: How to Lose Your Mind and Create a New One. Highly recommended.) Again, this is breaking it down very simply to focus on how we integrate new information. There is much more to gongfu, but that is a discussion for another day.

Any new skill begins with a thought. We learn about something from a teacher, video, or book…or else we stumble upon it in our practice. That is the level of thinking. It is conceptual, and it will stay as a concept until I take it to the next level: feeling. I need to feel it in my body-mind. In terms of brain function, one might say that the process goes from the cerebral cortex (thinking) to the limbic system (paleo-mammalian brain). The words take on more reality…become more substantial. If I do this over time, the information gets written into the hard drive of my cerebellum and becomes part of who I am. It is part of my being. (The brain is probably much more holographic than this simplified tripartite description implies, but it does help to convey that there are different ways of bringing consciousness to an activity.) At the being level, there is no pausing for reflection: only Do…or Do Not.

For example, early on in my taijiquan I came across the concept of peng jin. My teacher never spoke of this mysterious force, yet it kept appearing in my research. It was definitely part of the broader conversation. It is not a concept that converts easily into English, so consequently there is a lot of opinion and misinformation out there. But there were some masters who could actually demonstrate the soft power of peng jin, even if they couldn’t explain how to do it. Most would say something like “relax.” That wasn’t very helpful, but I could feel that something that was going on that could not be explained as a function of muscular force. I couldn’t do it using muscular strength, but I couldn’t do it just by relaxing either. There had to be more to it.

It really wasn’t until I came up with the concept of energetic coherence that the whole thing started to make sense. I had a map. It became something I could repeat at will. More important, I could teach it to others. The obstacle that prevents us from getting it easily is that it doesn’t feel like you are doing much when you are doing it correctly.

And that makes you tense up as you look for a more familiar feeling (muscular tension)…which works against actually making the peng jin happen. So, part of teaching peng jin is getting a student to witness the baffling power produced with so little effort.

But that is just the beginning to incorporate peng jin into your gongfu.

You have to do it again and again…and under as many different conditions as you can…until it becomes part of your being. I don’t have to think, “Now I will activate my peng jin.” It’s there when I need it. But I did have to do just that thousands of times until it became gongfu.

Once you get the feeling of peng jin, you don’t need a partner to practice it. Each time you do a taijiquan form the opportunity is there. At first, a partner can help you gain confidence that you aren’t just kidding yourself. And you want to check your progress periodically so that you don’t backslide (you will). But you can practice activating peng jin a hundred times a day. Use a wall, a pole, a tree. Relax muscular tension and activate energetic coherence by pointing and reaching with your index finger. Meet something with your forearm…even if it is just the air. 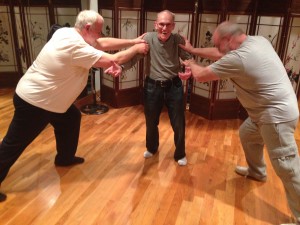 Thinking to Feeling to Being is a loop that feeds back into itself. Each time you repeat the process diligently (consciously respectful) you include that information into the next iteration. When enough energy and information are present, then you have a breakthrough into a new, higher order of Being.