The amazing high-wire crossing of Niagara Falls by Nik Walleda on June 15 is still fresh in my mind. How many of us would be willing to cross even a two-foot wide walkway high above the falls? Not me. Forget about a thick metal wire!

Niagara has a rich tradition of such daredevils. The first to walk above the falls did it over 150 years ago. It was June 30, 1859. Niagara Falls. A hundred thousand people anxiously watched a seemingly impossible stunt. French funambulist (tightrope walker) Charles Blondin successfully crossed 1,100 feet of hemp rope and into a life of fame and fortune.

Blondin (born Jean-Francois Gravelet) was masterful showman. In subsequent crossings he challenged the audience by ramping up the degree of difficulty: blindfolded, pushing a wheelbarrow, on stilts, performing back flips, standing on a chair, and carrying his manager on his back. Once, he astounded his audience by setting up a stove on the rope, then preparing and eating an omelet. 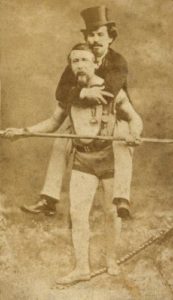 He made a substantial fortune by dazzling spectators with stunts that pushed the limits of their imagination. In a European tour, he courted disaster when a guy wire became entangled with the wheelbarrow he was pushing. In the barrow? A small lion. He provoked public outcry in England when the wheelbarrow carried his five-year old daughter who dropped rose petals on the crowd below. (He was instructed by the British Home Secretary to cut that right out.)

Certainly Blondin had a highly developed sense of equilibrium. His father was a gymnast, and Blondin showed great aptitude at the age of five. He became an orphan at age nine and had to learn very quickly how to get by on his own, so he turned pro. The Frenchman honed his natural gifts with a flair for the theatrical. He performed into his seventies and continued to innovate, including cycling on the rope. Blondin died of diabetes at age seventy-five.

Blondin’s exploits are so intriguing because they provoke a visceral response in those of us not so gifted. Even those among us with great balance (I do have a friend who walks a slack rope while hula hooping and puffing on a joint) have a hard time imagining walking on stilts on a tightrope above Niagara Falls. There is a point where the fear kicks in and our ability to perform goes out the window.

Most people can walk a straight line painted in a parking lot. That number drops off considerably when that straight line is on a fence a couple of feet up. Take it up to fifty feet and you won’t have many takers.

In my misspent youth, I was employed briefly as an ironworker and had to walk girders just a few inches wide. Something happens when you get up there twenty or thirty feet. You can learn to do it, but it occupies a lot of your attention. The danger of falling clouds your thinking.

When we are afraid we think differently. The frontal cortex loses up to eighty percent of its blood flow as resources are sent to the limbic system to activate the fight, flight, or freeze mechanism. Nik Wallenda has no time for such shenanigans whilst plying his craft, and perhaps less dramatically, we don’t either when exploring our gongfu. Like a good funambulist, we must feel the alerts sent by the body/mind but not allow them to dominate our behavior. That requires training. And that is specifically why I developed The Edge exercise.

The Edge is designed to parallel the sequence needed to meet a challenge with Love not Fear. First we acclimate to the challenge by simply receiving the incoming energy. Next we explore the limits of the structure by hanging at the tipping point. Third, we receive the incoming energy while energetically coherent. F0urth, Presence. And Fifth, we include all prior steps and engage another in an I-You relation. This sequence is repeated over and over until it becomes second nature. You gradually increase the levels of challenge so that you can confidently employ The Edge in any situation.

While I don’t plan to test that assertion by moonlight strolls over the high wire, that is how I would do it if I had to. I know it works for everything else so far.