It’s a Good Day to Die 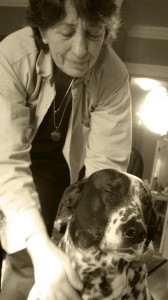 Fifteen years is a nice run for a dog that size. Arthritis made climbing stairs a real chore for him, and took a lot of the joy out of the things he liked to do. But even up to the day before he passed, he made the climb to soak up some spring sun in the backyard. He would still eagerly greet you at the door, tail wagging vigorously. And would eagerly devour roasted butternut squash with the manic intensity of a four year old eating ice cream.

For the last month or so, he would sit and make eye contact with me for minutes at a time. He would just gaze into my eyes as if that I-You relation was the only thing that mattered. Like many dogs, he did that throughout his life, but it took on a different quality toward the end. I try not to get too anthropomorphic about it, but it’s hard to look at it strictly as an uptick in oxytocin levels. There is a spiritual connection in those meetings.

The night before he died he did not eat. It was clear the next morning that he was going soon. We told him how much we loved him and that whenever it was time to go, he did not have to stay around for the pack. When we returned from work, he was still alive. He waited for us to say goodbye. We held him and ten minutes later he passed. You felt the spirit leave the body. 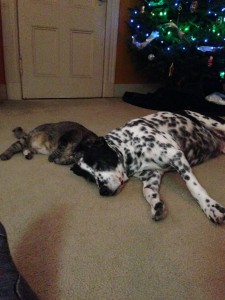 Faolan and Zoe under the Christmas tree

I got the sense that he consciously chose to exit in the love of his pack.

Some will say that it’s just “coincidence.” My personal experience says otherwise.

We had a German Shepherd/Lab, Seamus, that was hit by a car and dragged for thirty feet. Blood everywhere. I held him in the back of the pickup as Maria drove to the vet. I could feel him “die.” Then a minute later he miraculously started up again. I couldn’t believe it. The vet said he probably wouldn’t make it through the night, but gave him an IV and said he’d call in the morning.

Next morning, he was shocked that Seamus was not only still alive, but had no broken bones or internal damage. Big patches of skin were missing and he had dozens of stitches. He slept standing for months because it hurt to lie down. It was not his time to die.

Five years later, we went to Chicago for Maria’s mother’s funeral and were gone for a few days. Seamus stopped eating. When we returned he greeted us enthusiastically, then curled up on his favorite spot and passed away peacefully within the hour. He had said his goodbyes. It was time to go. It was a good day to die.

Each day I say, “It’s a good day to be alive.” I’m hoping that I can embrace the transition to the next phase as gracefully as these two wonderful canines did.