My good friend and fellow Alchemist Andrew Hahn, a.k.a. “The Kirtan Rabbi”, celebrated the release of his new CD “Non-Dual” with a killer show at the Integral Yoga Institute on 13th Street last night. He ditched his trusty harmonium for the performance (and the CD) in favor of an intoxicating guitar-based sound that alternated between quiet meditation and exuberant celebration. The new form gives wings to Andrew’s irrepressible passion and exhilaration.

Kirtan (also known as Bhajan) is a form of chant developed in India to heighten participation, communal feeling and ecstatic communion with the divine. Its usual, distinguishing feature is a formula of singing based on call-and-response. The chant facilitator offers something and then the participants return the favor…Kirtan is fully participatory. It breaks down the barrier between “leader” and “listener.” Its improvisational and experimental nature, make it a fun, yet strangely deep game to play — for both adults and children. 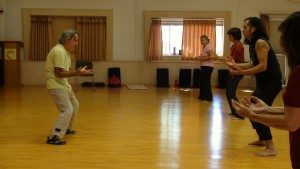 The rebbe is a long-time martial artist. After 25 years as a black belt instructor in karate, he embraced the Chinese internal martial arts fully for the past 15.

He practices taijiquan, xingyiquan, baguazhang, and yiquan. Last night he explained “non-dual” by quoting Master Yang Fukui: “The highest level is ‘maybe-maybe not’.” 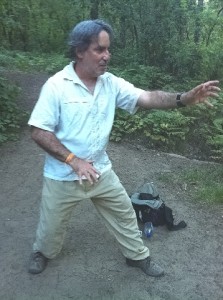 Andrew is a regular contributor at Tai Chi Alchemy in Sedona, and that is where he performed his first kirtan many years ago. Last September we were given a preview of the new material at a yoga studio in Sedona.

Check out his interview with Yoga City NYC. His new CD Non-Dual can be purchased or downloaded at his website or at Amazon.com.