Levels of Engagement (by Maria) 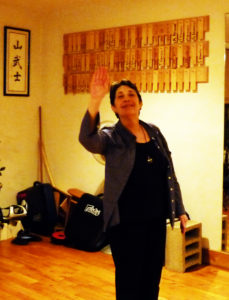 In our Wednesday night Tai chi class, we have been working a lot with Engagement. Any of you who have done the Edge exercise are familiar with the fifth step, which is engagement.

Basically, we are finding our partner, asking the question ‘where are you now?’ and answering ‘here you are’ once we have located the being in front of us.  Also, any of you who know me, are aware of my habit of practicing my tai chi as often as I can in my daily life.

So for the past year or so, I’ve been practicing consciously finding the being in front of me. The guy who sells coffee at the ferry, the security guard at the turnstile at work, the cafeteria staff, the users with the broken laptops, my colleagues at work, the riders in the subway, tourists asking for directions etc., etc.  As Rick is also working on his book about finding You in a world of It, the idea has been present very strongly in my life lately.

Here is what I have noticed in my practice. First, most people do not engage readily – they fall into the social filter of their function and do not really see you as a person. So there is a lot of ‘it-ness’ going on out there.  Second, when I do recognize the being in front of me, regardless of how they see or don’t see me, something shifts. Third, each person has a level at which they are willing to engage. I’ve come to the conclusion that the first level at which most people can tolerate Engagement is that of manners

Years ago, I had started saying “Good Morning” to the bus driver and “Thank you” to him when I reached my destination. It mitigated a lot of my rage against the MTA for their ragged scheduling of my bus line to see the driver as a person just like me who was trying to do his/her job and deal with the various difficulties that are encountered along the route. (semis backing into driveways, wheelchair ramps that malfunction, riders who won’t move back to let others on the bus, flooding, reckless drivers, etc.)

These days, I notice many riders are doing the same and the ride is more peaceful. So what changed? Simply the recognition of the bus driver as a person.

There is something wonderful about someone noticing that you exist.

Someone acknowledging that you are there. It is safe and easy to practice good manners as the first level of Engagement. You won’t offend anyone, and in recognizing the existence of the beings around you, you may start some positive changes. I am finding this to be an enjoyable practice – recognizing when to engage and when to refrain from engagement – spotting what level of engagement a person is willing to accept – adjusting my personal space to allow others to breathe more freely, etc. (It’s a long term practice for me.)

Just one more example: the security guards in my office building. Most people don’t see them other than as part of the furniture. I started with finding the being and just giving a nod to them as I walked through the turnstiles.Then a smile. After a while, I progressed to ‘Good Morning’ and eventually, they started saying ‘Good Morning’ back to me.  Just last week, one of the guards complemented me on my new haircut – wow, how amazed I was that she had noticed, when some of my colleagues had not! How delightful it was to be now on a chitchat level of Engagment – but real Engagement. I see her and she sees me.

Hence, manners, find the being and be polite. An easy way to practice your tai chi.