"Light, Lively, and Connected Throughout"

“Whenever one moves, the entire body must be light (qing) and lively (ling), and must above all be connected throughout (guanchuan)…There must always be completely one qi.”
Taijiquan Jing, attributed to Zheng San Feng 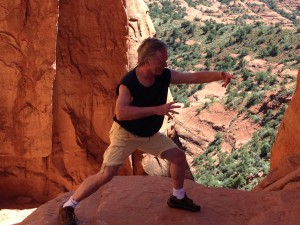 If you want to take your game to the next level, these words from one of the most important of the Taijiquan Classics are where to begin. Nothing else gives quite so much bang for the buck. For the martial artist, this is like upgrading your heavy, clunky medieval suit of armor for a light, soft textile vest. Sure, the metal armor looks cool, but it does limit movement. More important, “light-lively-connected throughout” allows for whole-body integration that reduces the internal conflicts that prematurely age and sicken us.

What “internal conflicts?” Most of us are in a continuous battle and our bodies reflect it. You need only find a spot in your body that is sore or tight and that is where your muscles are being given contradictory instructions about what to do (neck, shoulders, and back are the usual suspects.) Some of these conflicts have been going on for decades and require a large energy expenditure to maintain. That soreness you feel is your body telling you to consider other options.

Whenever one moves, the entire body must be light (qing) and lively (ling), and must above all be connected throughout (guanchuan)…

“Light” (qing) does not imply that your should lose twenty pounds or float like a ballerina. It implies aware, sensitive, and responsive to touching or being touched. “Lively” (ling) “refers to an inner liveliness, one that is nourished by qi. It can also be translated as agile or nimble. In other, contexts ling can refer to spiritual qualities and beings.” (Davis)
What is “connected throughout” (guanchuan)? Aren’t all your body parts already “connected?” Isn’t your “foot bone connected to your ankle bone?” So clearly, there is more to it than just showing up and letting the body happen. It requires awareness and intention (yi) for the magic to happen. There is a conscious integration of body and mind that connects the internal dots and permits the taijiquan practitioner to be lively and agile, with supple strength and explosive power.

Similarly, if it is crucial to state, “There must always be completely one qi,” then we have to consider that the author (Zheng?) considers that there are times when the qi is not unified. When the mind is scattered and disturbed, so is the energy of the body-mind. Electrodes placed at various places on the skull reveal a mish-mash of brainwaves in “normal” brain functioning. With practice, one can learn to synchronize brain activity to generate a coherent field. When the diverse energies of the physical body and the mind are brought into unity by conscious intent, well, cool stuff happens.

From these few lines we get some of the essential qualities of taijiquan:

There is a whole lot more to the art than these points, but they provide a succinct list of some key qualities. Is there a simple way to access these core principles quickly, effectively, and predictably?

It all starts with energetic coherence (“one qi”). I have given the long version in Taijiquan: Through the Western Gate and recommend that for anyone who wants a deeper understanding. For our purposes here, allow me to summarize:

Each of the fifty trillion or so cells in your body has its own energy signature. For any organism to be “alive” all those different cells must cooperate to display some level of coherence, unity. Organisms that are capable of highly coherent states seem to survive better. Non-coherence moves toward breaking down (entropy). In scientific language, it is said that “entropy is inversely proportional to the coherence of the organism.”

In complex creatures like humans, the system that allows all these trillions of cells to talk to each other almost instantly is the connective tissue system (CTS). The most prominent parts of the CTS are ligaments, tendons, fascia, and cartilage. Structurally, it is a liquid crystal—like a computer monitor or digital watch. Energy and information travel throughout the body with the speed of solid state electronics. Cell biologists call the CTS “the living matrix.”

The CTS unifies the body, but that unity can be disturbed by contradictory commands from the mind. Most of those commands come from unconscious behavior patterns that have been adopted over a lifetime. These result in the internal conflicts that cause us so much pain. These unconscious patterns “kink the hose.” Despite the misery they can cause, the body-mind clings to these old ways of standing, sitting, and moving because it takes some effort to change the familiar and predictable.

And that requires gongfu. If you have survived decades doing things a certain way, then the body-mind needs a pretty good reason to install a new system. And it is not enough to just think about it; you have to feel it. It has to become the “new normal,” and if you want to be able to count on it in emergencies, then you have to practice it under various degrees of stress.

Since your CTS connects every cell in your body, it is hard to access it directly. It doesn’t respond to verbal commands. It speaks a physical language untranslatable to our conscious minds. But we can create conditions where we interrupt our interruptions and allow it to get on with what it does best. Some large muscle groups can be relaxed just by intending. Other muscles are unresponsive to conscious intervention. When we calm the nervous system, many of our unconscious stress responses are quieted, as are the internal conflicts they generate. When we calm the nervous system, the body relaxes, which calms the nervous system…The body-mind moves into a state of relaxed integration—more coherent simply by not working so hard at generating non-coherence.

It is important to be able to let go of tension in stillness, but how can we find heightened coherence under stressful life conditions or in martial arts? Can we access it and maintain it while executing an intricate dance routine or giving an important presentation to a client? So many of our learned patterns kick us right back into a false “emergency” and the non-coherence that generates.

Is there a fast, simple, effective way to get the attention of the CTS and heighten coherence?

I competed in push hands tournaments for years and enjoyed considerable “success” using a lot of gross physical force (li). That is, I was able to beat other players who were doing likewise. When I compared what I was doing against the ideals of taijiquan, however, I felt unsatisfied. “Let him come with great strength. Lead his movement, using four ounces to deflect a thousand pounds.” I wasn’t doing that. I met his thousand pounds with a thousand and one pounds of mine.

I knew I had to reexamine my whole approach and “invest in loss.” When I emptied out my pre-conceived notions of what was advantageous or even possible, insights became available that would have gone unnoticed previously.

One crazy idea has become an intrinsic part of my gongfu. It is sufficiently off-the-wall that it demands its story be told. I found that simply by pointing and reaching with my index finger I was able to instantly and effortlessly amplify my effective power. It wasn’t a “Eureka” moment of discovery, more of a groping in the dark for several years. It still sounds pretty ridiculous, actually: “Just point your index finger as if you are reaching for a light switch and you will be stronger…immediately.” Yeah, right.

But it worked. I even tested it against large, highly skilled players and won major tournaments both in middleweight and infinite weight classes. Not only did it give me the power to uproot guys a hundred pounds heavier, but it also had another unexpected effect: my root was amplified as well. I was able to absorb their superior strength and body weight without a lot of effort.

As I continued to work with pointing, I tested it under various conditions, and shared the idea with others. It became apparent that it was more than just a clever trick. Neutralize a black belt’s punch with one finger? Interesting. Absorb the force of a 250-pound weightlifter while standing on one foot. Curious. I was giddy with the possibilities, but it was still in the category of what I called “stupid taiji tricks.” It got people’s attention, but then what?

I sensed there was more going on than met the eye. There was a universal principle at work, but I didn’t have the language to explain it. I just knew this simple action changed me when I applied it, and it had that effect on some other people. When it didn’t work, what that revealed was even more valuable—layers of additional assumptions, confusions, and misunderstandings that blunted its effect. Each layer showed how vital conscious intention is to its effectiveness.

Energetic coherence allows us to shed all that heavy armor and replace it with qing, ling, and guanchuan.