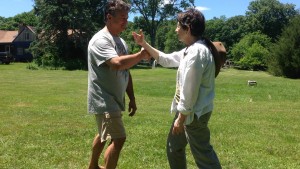 Don’t expect me to approach this discussion in a linear fashion, as I tend to think laterally or in a scatter pattern.

Let’s consider Yin and Yang. We have often heard that yin is the female principle, yielding, softer, earth, darkness, absorption. Yang is often thought of as male, heaven, light, activity, outgoing. Yang is directionally up and out and Yin is down and in. There is yin in yang and yang in yin, if you consider the well known symbol. There is a need in life for balance between the two.

When we are working on tai chi form, we notice outward (yang) movements and inward (yin) movements. We learn both flows and qualities. We learn how to go from one to another. We notice how one part of the body can be yang and another yin simultaneously. We can see the power that is generated from playing the two against each other. Connecting heaven and earth. Holding two points and letting the energy flow between them – up and out or down and in. We are learning to notice, cultivate, circulate and express chi.

Extending into a two person exercise, in push hands, we are attempting to learn how to deal with incoming and outgoing energy. We are learning about Jin, about chi expressed physically in a direction with intention.

When I was first introduced to push hands, I didn’t have a clue about any of this. I was told that the object of the exercise was to push my partner off balance.

Since I had not yet even understood what chi was, my idea of pushing was really all muscle and leverage. My survival instincts kicked in and, being small, I learned to neutralize – which to me was essentially flight – getting away from the incoming energy.

My idea of pushing was to be faster than my partner, get under their guard and shove at their center or across their center. I always expected to lose, because I was generally working with men who were larger and stronger than I was. There was really no ‘win’ in it for me, because if I did knock someone off balance, it was considered a ‘lucky shot’.

So I went into the study of push hands with the wrong idea of what it was.

Holding your ground while pushing someone off of theirs was instantly competitive. Sure, I could learn to ground or root better. Sure, there are many techniques for neutralization. Sure, there are guidelines for how to see your partner’s weak spots and aim there to deliver a push.

However, underlying everything was this sense of competition, that there was a winner and a loser. Now, I see nothing wrong with that if you are in an actual competition in a tournament, but to have this pressure in a class puts a distinct spin on the exercise.

Why am I bringing this up first?

Several of you have mentioned that the competitive spin to the training is a turn off. It throws you into a game that you don’t really want to play. That is a vital point. If you are choosing to compete, that is fine. Many women enjoy competitive play and excel at it. They also tend to rely more on energetic techniques than muscle and are very quick and alert in my experience.

But, if you have competition thrust upon you, then all kinds of triggers come into play, and who needs that kind of noise? What do I mean by triggers? Fear of failure. Giving in to overwhelming force. Being inadequate. Being not good enough. Feeling the game is rigged against you. (opponent bigger, stronger right from the start) Thinking you can’t win. Feeling like you shouldn’t win so your partner will not lose face. Etc. And of course, moments from the past when you were overwhelmed by external force. (I won’t list any, but you can imagine the ramifications of this one.)

Given that most teachers expect you to just deal with it, be aggressive and learn by doing, it is no wonder that women shy away from this practice. Who needs to generate more self doubt and work out one’s fears and past failures to deal with incoming force while engaging in what often amounts to wrestling with a larger, stronger partner? This does not sound like fun.

Men often feel that they are expected to be aggressive, competitive and have better gungfu than the next guy. After all, they are supposed to be the protectors of the family, the ones to defend the tribe, etc. They are also susceptible to triggers. The need to dominate. The fear of losing face. The pissing contest. etc. They easily fall into this push hands is supposed to be competitive mind set and work dilligently to develop better root, more technique, quicker response time and all of that. It becomes an ego trip for them.

When working with female partners, they can fall into odd patterns of condescending, superior attitudes with no real intention to help the women improve. (triggers again – that men should be stronger than women, that it’s shameful to be pushed around by a woman, etc.)

Lucky as I am to have a teacher who is undercutting the competitive and really focusing on the learning to handle the energetic exchange, I still see our triggers kicking in at times. Rick has to constantly remind us to stay present and not fall into the trigger trap.

So getting back to Yin and Yang, it occurs to me that the teaching/practice of push hands is a bit out of balance. I, for one, got good at the yin aspect, getting ghostlike in my ability to evade incoming energy without attempting much in the yang aspect, reaching out to get my partner off balance. Some others got solid in the yang aspect, using muscle, stance and force to be constantly outgoing and neglected the yin aspect of allowing incoming and using it to advantage. Both approaches are out of balance, and we each needed to work on the opposite of what we were good at. (thanks, Rick)

The very real benefits of learning to deal with incoming force and to use the minimum amount of outgoing force necessary to do the job are invaluable. Extending your understanding of chi beyond your own body to be able to deal with the energy of another is a life enhancing skill.

Consider taking it out of the competitive context. Is that possible?

I don’t know about you, but I do not normally find myself in situations where I need the fighting applications of my tai chi. However, I daily find that I need to deal with incoming energy and use force to accomplish tasks in my life. Why limit push hands practice to a competitive, martial context? Why not use the exercise to really understand how to receive, neutralize, channel, redirect, express chi?

This article is part 2 of a 5-part series on Push Hands from a female perspective. Read the rest: