Meditation in Action- Part One

In 2010 I visited an exhibit of the paintings of the Zen master Hakuin at the Japan Society in New York City. Hakuin is the guy credited with creating the most famous koan…the one we all know…”What is the sound of one hand?” His paintings communicate powerfully.One of his favorite subjects was Daruma (Bodhidharma), the monk who brought Buddhism to China and is said to have taught martial arts to the monks of Shaolin Temple.

One painting particularly struck me, due mainly to the Hakuin quote inscribed:

Meditation amidst activity is a thousand million times superior to meditation in stillness.

I was sufficiently inspired to write a blog about it. Some of what I’ll discuss here was begun then, but that was eight years ago and it’s time for another round.

How do we make the jump from stillness meditation to activity?

I believe that Hakuin’s “meditation in activity” is a fruit of the same tree that produces “Flow” states and the “Zone” in sports. Objective consciousness takes a back seat for a moment and we move into the radical Present. For most of us, Flow and Zone states are serendipitous and transient…they are rare and come and go on their own. Meditation, by contrast, is intentional. It requires an act of will, an intention to shift your relationship to the present moment.

There are many many types of meditation, each with their own purposes. This article provides an introduction to some of the more popular ones: Types of Meditation- An Overview of 23 Meditation Techniques. The common denominator for all meditation, however, is any practice to bring yourself into the radical Present by shifting at least momentarily into non-objective awareness.

Simplifying the purpose of meditation might help us to bridge the gap between “meditation in stillness” and “meditation in activity.” The following is taken from Chapter 14 of Finding You in a World of It.:

When you are highly coherent, it becomes easier to tap into an
ocean of non-conceptual awareness. It is without shape or form. No
thought, feeling, or perception. No-thing. Emptiness. Our thoughts are
waves that appear and disappear on its surface. Through a practice like
meditation, we begin to notice the difference between differentiated and
undifferentiated mind-states.

Our thoughts may appear to come in a continuous stream, one after
another, but that is not really accurate. Each thought that comes to mind
has a beginning, a middle, and an end. It arises in the nervous system,
gets the attention of the conscious mind, and then goes away. And
before and after each thought there is a space…a no-thought. If you are
already entranced by the next thought that appears, you may not notice
this space. But it was there, however briefly.

The It-mind does not usually consider that moment of non-thinking valuable. It prefers instantaneous inference about what is going on. Quick thinking is a highly regarded skill in a world exploding in information, and most of our education is geared to developing cognitive ability.

We can have both. We need both.

Meditation is anything that helps us differentiate thought/no thought
by training our attention. With practice, we awaken from the It-trance,
ready to participate fully in our lives.

Some of us find it easier to access “dissolution of thoughts in Eternal awarenss” via stillness meditation. By creating a setting that is freed of distractions, what remains is our thoughts. We have the luxury of witnessing the activity of the mind as awareness condenses into consciousness. Mind becoming aware of mind.

Consciousness is awareness of awareness. (See “Awareness vs. Consciousness.“) We are aware of vastly more than we can ever be conscious of. Each thought is an infinitesimal piece of that ocean of awareness that the conceptual mind can recognize as at least momentarily valuable. The conscious mind reduces millions, or perhaps billions, bits of pre-conscious information into a dozen or so bits that it can digest.

One can identify impulses as they bubble up from the pre-conscious mind and condense into recognizable thoughts. Each thought has a beginning, a middle, and an end. It doesn’t know its parents or its destination. Only a tiny few get our attention, and they are often chosen because they conform to familiar patterns.

Stillness meditation in a stable environment allows us to sort through the barrage of incoming information without having to make sense of it. We get to witness the mechanism of objectification without investing in its process. It enables us to witness our thoughts and distance ourselves from them.

Recognizing that one is not one’s thoughts illuminates Voltaire’s “knowing without thinking, merging finitude in infinity.” I like to call this state “non-objective awareness,” which contrasts to “object-based consciousness,” the It-mind.

Yet there are many who cannot abide even the idea of sitting motionless for hours trying to climb outside their thoughts. Some find the artificiality of such an exercise even more of a distraction. The very things that makes stillness meditation work can be off-putting. Their bodies wanna MOVE, damn it! Luckily, we can accomplish the simple basic goal of meditation quite exquisitely without the restrictiveness of rigorous sitting meditation.

If we can agree that meditation is “any practice to bring yourself into the radical Present by shifting at least momentarily into non-objective awareness,” then perhaps there are alternative ways to accomplish that.

Taijiquan has often been called “meditation in motion.” I know that for me sitting meditation became much more accessible after a few years of taiji practice. Done correctly, taijiquan can certainly bring you into the Present with moments of non-objective awareness. It doesn’t guarantee it any more than sitting meditation does, but the opportunity is there. And for many, it works better.

The most important part of doing taiji “correctly,” in my humble opinion, has little to do with the grace and beauty of the movements. The key element is body-mind-spirit integration, what I have been calling “superconsciousness.” The limited conscious mind is transcended and included in awareness that “knows without thinking.” (See “Superconscious! Seeing with Three Eyes.“)

It is only in a superconscious state that we can get beyond taijiquan as just an effective physical exercise, and open the door to its vast potential.

Taijiquan brings you to Milarepa’s “gap between thoughts” and “non-conceptual awareness” through a different door than most stillness meditation, which seeks to eliminate the distractions of sensory-motor functioning. You get there through immersion in activity rather than transcendence. You don’t just “witness” your sensations, you FEEL them.

Deliberately and intentionally feeling each movement…not just thinking about it or witnessing it…changes the way we process information in the brain. It integrates body, mind, and spirit.
It opens all three eyes: Eye of Flesh, Eye of Mind, and Eye of Spirit. Superconsciousness.
Tajiquan provides a template for Meditation in Activity, how to be superconscious in the lived life.

Is that a “thousand million times superior”? 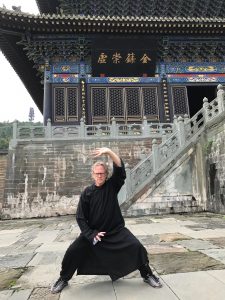 Look for Part 2 of this discussion, where I will talk about how this works.