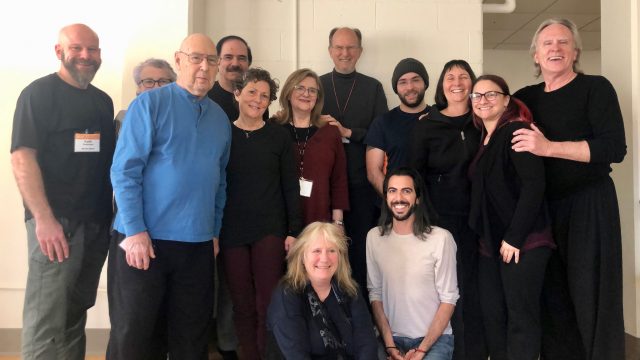 I had the honor of teaching a five-day meditation retreat at the beginning of March for Kripalu Center for Yoga and Health. It was called “Meditation in Stillness. Meditation in Action.” I was joined by the wonderful Dr. Renee Rhodes, clinical psychologist, who helped people to integrate all the new information and experience. There was an opportunity for some real growth in a very short time, and Renee helped make that as smooth as possible.

We finished up just in time, finishing right before Kripalu closed down for the pandemic. It was great opportunity for me to share stuff I’ve been working on for decades and to see how it worked with people unfamiliar with my approach. The results exceeded my hopes. Said one participant, “You and Renee may very well have saved my life.”

The intention for the seminar was to identify the common denominator for most types of meditation and to present a smorgasbord of techniques that could produce that result quickly and easily. There are thousands of types of meditation, and each has its charms and its limitations. With a choice of practices and an understanding of what is possible with meditation, perhaps more people would be inclined to use this valuable tool more often.

What is the common thread in all forms of meditation?

Simply put, meditation “gets you out of your head.”

More precisely, it is any activity that permits a shift from conceptual to non-conceptual awareness.

“In your head” means trapped in a loop of excessive thinking. Our thoughts may appear to come in a continuous stream, one after another, but that is not really accurate. Each thought that comes to mind has a beginning, a middle, and an end. An impulse arises in the nervous system, gets the attention of the conscious mind, and then goes away. And before and after each thought there is a space…a no-thought. If you are already entranced by the next thought that appears, you may not notice this space. But it was there, however briefly.

It is in that gap between thoughts that we encounter NOW, the Radical Present. In that state, we are able to “know without thinking,” as Voltaire put it. Milarepa said, “In the gap between thoughts, non-conceptual wisdom shines continuously.” Non-conceptual awareness gives the mind a break and allows for insights not generated by rationality, but by a whole-brain integration.

The steady stream of thoughts bubbling up unbidden may correlate to the part of the brain called the default mode network (DMN). [Brain research is still in its infancy, so I consider references to brain function as useful metaphors, not “hard facts.”] The DMN is active whenever we are not being mindful. Mindfulness is the psychological process of purposely bringing one’s attention to experiences occurring in the present moment without judgment. The DMN is charged with the important task of keeping us alive by constantly updating our personal narrative (ego) and assessing threats by anticipating the future and trying to explain the unresolved issues of the past. It churns away anytime we are not consciously addressing a task in the present, and may even be active when we sleep. Most meditations, as I see it, provide a way of quieting that particular hum of brain activity, allowing for other parts to come to the fore: the “non-conceptual wisdom” that Milarepa speaks of.

The DMN is what many people consider the “self,” since it is may be the only part of the brain that “talks back” to us. While actually a tiny part of the overall function of the brain, it looms much larger in our self image (ego) because it is so available.

The DMN serves an important function, and as I see it, the goal is not to erase the DMN or the self, but learn how to easily shift in and out to easily access other states of awareness. I believe that that requires integration of body, mind, and spirit, and that means learning to find the essence of meditation even when engaged in complex action.

Goals for the Seminar

We started Sunday evening. After hearing what people hoped to get from our time together, I shared my goals for the group (Click links for clarification and discussion of key points):

I then played a “Good Words” meditation. For many of us, much of the chatter we hear from the DMN is negative: self-criticism, unfair judgments about others, fear, anger, etc. It is a form of trance, where the words we tell ourselves produce emotions that are counter-productive. The opposite is also true: hearing or speaking words with a positive connotation can produce emotions that elevate and inspire.

You can change your “trance” by changing your script. Notice when your thoughts go negative and consciously substitute a more uplifting one. Do it for a while and see how that affects your mood. The old trance will reassert itself over and over, but will gradually yield with practice.

In the following meditation, find a time and place where you won’t be interrupted for over 20 minutes, relax comfortably, and allow the words to wash over you like refreshing ocean waves. Feel your breath with each new word. Resonate with the word, then let it go. Don’t think about it, analyze it, or hang onto it. Just like your thoughts, it comes and goes, followed by a space.

On Monday, the first full day, we began with a simple 20-minute mindfulness meditation to see where everyone was at. “The longest 20 minutes of my life,” said one, and similar feelings were shared by others. Simply being there, conscious of thoughts that arise, can be quite a challenge. One person said he hoped he could reduce his painful thoughts to 30% some day.

“Some day” happened about an hour later, after we did a Coherence Meditation similar to the one posted in my last blog, “Coherence and Cortisol in the Time of Covid-19.” He was astounded how much of his brain-noise had disappeared.

After the coherence meditation, there was a dramatic shift from the feedback from the mindfulness exercise. “Was that 20 minutes? It went so fast!” “I could have done that for hours.” What changed? Instead of passively observing or “witnessing,” we were participating in changing our internal state. We were not waiting patiently for the mind to clear, we were actively creating the desired effect.

This set the tone for everything that followed. Two things were established: coherence and participation. We are actively involved in creating our internal state, good or bad, and we can also learn how to improve our lot, regardless of circumstances.

Meditation in Action takes the next step and brings coherence, clarity, and calmness to the doings of life. This we explored through standing meditation, coherent walking, and qigong. In Meditation in Action, we develop the ability to smoothly and easily shift between conceptual and non-conceptual awareness, from thinking about the experience to being IN the moment. It integrates body-mind-spirit by consciously engaging the body in the Radical Present without losing awareness of the conditions that must be engaged. In other words, it is more participatory than transcendent.

This is the opposite of what many consider moving meditation. It is not just performing a familiar action so the mind can float away. It demands full attention to creating each movement newly to bring conscious awareness to what had been preconscious. Doing so shifts the mind into a superconscious state, not limited by the rational mind, but not stuck in preconsciousness either.

In this “meditation in action,” you enter the gap between thoughts for sustained periods, but can easily shift to the slower conscious mind when circumstances change and you need to reassess. That is because superconsciousness not only transcends consciousness, but it includes it as well. It’s not an “either/or” choice but rather a “both/and.”

I believe that this is the state that Cheng Man-ch’ing referred to as the “Heaven” level of taijiquan development, where “spiritual force” trumps both physical force and qi to create powerful effects. One must move beyond qi development to be able to fully use it.

“One’s mind should be on the spirit and not on the ch’i. When it is on the ch’i there are blockages. When there is ch’i there is no strength. Without ch’i there is essential hardness…The ch’i can be transmuted and evolve into the function of spirit. What is meant by force without force is spiritual force. Wherever the eye focuses, the spirit goes to0, and the ch’i follows. Ch’i is capable of moving the body without the activation of the mind, and spirit can carry ch’i with it as it moves. This is spiritual force, or what may also be called miraculous speed.”

Over the week, we covered much more than can be discussed here, and wrapped up with Meeting.

In Meeting, I encounter You with my whole being.

“Whole-being” means coherence, integration, presence. All that we had done up to that point led to this: the ability to encounter someone fully and consciously in present time, not as an object of thought, but as a co-creator of the moment we share. (This material is covered in depth in Finding You in a World of It.) The exercises we did for Meeting were profound and produced a heightened state of authenticity and intimacy.

Meeting answers the question, “What’s next?” after we have attained a state of integrated presence and awareness. We go beyond serenity, bliss, and presence to engage others in the Cosmic Dance.

“When I confront a human being as my You and speak the basic word I-You to him, then he is no thing among things nor does he consist of things. He is no longer He or She, limited by other Hes and Shes, a dot in the world grid of space and time, nor a condition that can be experienced and described, a loose bundle of named qualities. Neighborless and seamless, he is You and fills the firmament. Not as if there were nothing but he; but everything else lives in his light.”          Martin Buber, I and Thou

Here is a list of some of the “Arrows in the Quiver” we used during our five days together. They are tools designed to create specific effects in one’s state of awareness. No one was expected to have a full grasp of any of them; this was just a brief but deep introduction. Full understanding is a lifetime’s task.

Arrows in the Quiver

The notes that follow the key words are merely to jog the memory of those somewhat familiar. Further explanation can be found in my previous blogposts, books, and videos. (You can put a keyword into “Search this Website” at the sidebar. And subscribe to rick barrett.net on YouTube.)

This seminar was a lot of fun and a format I’d like to pursue in the future in other settings. It doesn’t have to be a five-day intensive like this one. It can be adapted quite easily to a one-day, two-day, or ongoing course.

My thanks to Kripalu for sponsoring this wonderful opportunity, to Renee for her compassion and expertise, and to the whole group for their dedication and powerful feedback.