I got a very interesting link from Sifu Marilyn Cooper recently, and I’d like to share it with you. Marilyn has been teaching internal martial arts for decades and operates the Little River Kung Fu School in northern California. She is the founder of Pushing for Peace, which uses taiji push hands as a tool for meditation, body-mind integration, and conflict resolution. The program was originally aimed at children and has presented in several countries. It has expanded its reach to include adults and those with physical challenges. The program seeks to shares the many benefits of taijiquan without requiring extensive forms instruction.

The article appears on Sifu Violet Li’s website, and is called Metarobics and the the Future of Tai Chi for Health.

It is written by health researcher Dr. Peter Gryffin, a long-time taijiquan and qigong practitioner. Metarobics is a term coined by Gryffin to distinguish the unique physiological effects characteristic of taijiquan and qigong. Metarobics compares them with some common forms of exercise (like forms of walking and running) by focusing on the oxygen saturation in the blood when doing these exercises. 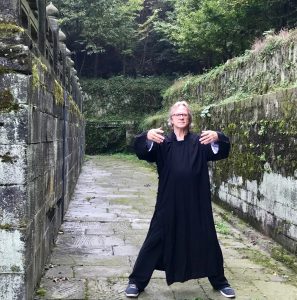 Oxygen deficiency in the tissues, called hypoxia, contributes or causes a number of diseases, including cancer.

I began researching cancer, and found that the traditional and the scientific were both right – one of major complications in cancer treatment is hypoxia (oxygen deficiency in the tissues). And the basic translation of Qi in most Chinese-English dictionaries is “Air,” or oxygen. Traditional martial art practitioners like to look beyond the basic translation of Qi, into the concept of energy fields and the metaphysical. And my own experiences support that this can be an important consideration. 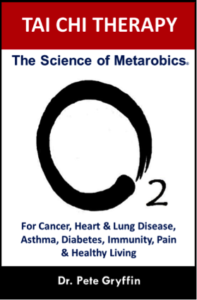 But I also realized that having a measurable and physiological understanding of the benefits of Tai Chi for health was critical, for generating acceptance and practice of these arts in the medical community, as well as in the general public.

Further research showed that hypoxia underlies or complicates pretty much every chronic condition, including heart, lung and kidney disease, diabetes, immunity, arthritis, and asthma. Since one of the primary goals of Tai Chi is to enhance Qi, or oxygen in the body, it seemed important to investigate potential mechanisms of action related to enhanced oxygen use and delivery.

Based on my research, a primary mechanism of action (not necessarily the only one, but a good place to start) was effects on blood oxygen saturation, diffusion, and oxygen based metabolism. From a theoretical perspective, it was possible that the focus on relaxation and the breath resulted in enhanced intake and use of oxygen in the body.

Most of us who have done taijiquan and qigong for a while can attest to its health benefits, but have a hard time explaining why to those not in the club. These practices are not rigorous enough to be called “aerobic” so the extensive research into aerobic exercise is not helpful. By measuring oxygen saturation in the blood Gryffin came up with some surprising discoveries: taijiquan and qigong significantly increased saturation. Other forms of exercise (including running) either did little, or actually decreased, saturation.

The slow movements of taiji and qigong, coupled with conscious abdominal breathing, circulate oxygen to the internal organs and throughout the body. More vigorous exercises concentrate oxygen in the big striated muscles and actually withdraw it from internal organs. (This is not to say that rigorous exercise should be avoided. Other benefits make it important for good health.) Gryffin points out that cancer is rare in the big (heavily oxygenated) muscles.

Cancer cells do poorly in an oxygen-rich environment. They metabolize in sugar, some requiring up to 200 times as much of the sweet stuff to keep producing. They starve with too much oxygen.

Does this mean that if you practice your taijiquan for 15 minutes a day you’ll never get sick? Of course not. If you live long enough and participate in life, you’ll encounter some physical challenges. But if you do your forms regularly, maybe you don’t get as sick and maybe you recover faster.

And maybe your “normal” is a bit higher than what it would be in a hypoxic state.

Dr. Gryffin’s book is called Tai Chi Therapy: The Science of Metarobics. It’s an important voice in the conversation
.