I just read Einstein’s Space and Van Gogh’s Sky by Lawrence LeShan and Henry Margenau. Great title, isn’t it? The book is about 30 years ahead of its time. It was written in 1982, so some of the ideas it boldly suggested are only now coming into the conversation.

Jonathan Bricklin and I visited Larry in his Upper West Side apartment last Friday and had a rousing 2 hour conversation. Larry is in his 90s now, but still brilliant, seeing patients for his psychotherapy practice and writing two new books. We should all be so engaged with life! 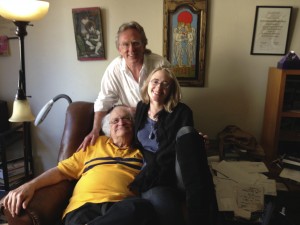 Rick and Micaela with Larry

I have written about negentropy before in this blog and still find it an important concept for any of us on a spiritual path.

In Einstein’s Space and Van Gogh’s Sky I came across such a perfect explanation of entropy and negentropy that I knew I had to share it.

If I were to hold the tip of a knife in a hot flame for a while the tip would be very hot, the blade warm, and the handle much cooler. When I remove the tip from the flame, it cools down as the heat warms the blade and handle until all are about the same temperature. The heat from the knife warms the surrounding air until the knife and the air around it are all about the same temperature.

This is entropy. It is the tendency of stuff to lose its energy and eventually disintegrate (fall apart) as form. The Second Law of Thermodynamics states this as a universal principle in the material realm. Everything physical moves toward equilibrium. Energy dissipates.

Living creatures reverse that by directing consciousness to change conditions. They create forms that allow (temporarily) for that tendency toward equilibrium to be interrupted. So, in the example above, the action of heating the knife creates negentropy in the knife. (Of course, one could expand the system and show the entropy of the bigger system. )

Whenever you do anything to increase the coherence in some part of your life, you create negentropy. When you do your taijiquan, practice yoga, or write a blog–negentropy. You are slowing the inevitable dissolution of all form by using your consciousness and will.

I am certain that Larry LeShan is still humming along at 90-plus because he likes to hold that knife tip in the fire and watch the sparks.