I have written a lot recently about the importance of reaching with the crown of the head, the niwan, to open the Jade Pillow Gate.

My emphasis has been primarily on its effect on your qi and as a quick and dirty access to superconsciousness. (See Opening the Jade Pillow Gate, Part 2 and related posts.) The Jade Pillow Gate at the base of the skull is a major energy gate that is often closed down by the position of the head. This results in a serious “kink in the hose.” When we REACH with the crown and tuck in the chin the kink is release and circulation is restored.

Doing so is transformational and is the key to what Cheng Man-Ch’ing calls the “Heaven” level of taijiquan development. It facilitates body-mind-spirit integration and whole-brain coherence. (See earlier posts.)

Today I would like to emphasize another important benefit: its effect on your spine.
In my first few years of taiji study, I was a dilletante. I dabbled. I didn’t have the time or the energy to go all in. In the early 1980s, I was working like a dog doing construction and interior renovations, mostly in Manhattan. That meant hauling hundred pound sacks of plaster and cement up five flights of sometimes rickety stairs in sketchy neighborhoods. Holding sheetrock overhead with one hand as you worked your screw gun with the other. Stuff like that. It took its toll on my body.

My back was a mess. That meant frequent trips to the chiropractor to get some relief. And relief came…for a brief time. One day it occurred to me that maybe what I was DOING had some effect on the pain I was experiencing. But none of the people I was seeing had any answers about how to change that.

No one was talking about it at the time, but the answer was right there: taiji! DUH! My problems were caused by imbalances due to the way I used my body, and here was a proven system of movement that addressed that very thing. I gave it a shot.

I started taking my practice seriously and within a couple months my back pain was mostly gone. I’d have days now and then, but nothing like before. Success there  prompted me to go ever deeper into this remarkable art to see what other gems were hidden there.

In the early days, we were advised to “lightly hang from the top of the head as though supported by a thread from above.” I did this for years, but never really felt much effect. It wasn’t until about 25 years ago that I changed that to reaching with the crown of my head, the area centered at the hair whorl. This made a huge difference. My periodic headaches/neck pains disappeared when I did it regularly. It’s something that I still must remind myself to do, but I am much more sensitive to the neck tension that comes from kinking the hose.

I recently saw a new chiropractor. It had been a couple years since my last one moved to Brooklyn and I felt it was time for an adjustment. She took X-rays of my neck and lumbar areas and marveled at my “beautiful” spine. “It’s better than mine!” Something that had been a major source of difficulty for me in my twenty’s and thirty’s was now a major strength at age 69! Normal deterioration that accompanies aging was missing. If anything, my spinal health had improved.

I was surprised that my intuition was so dramatically confirmed by the X-rays. It is something that attribute to my gongfu.

Posters on the chiropractor’s wall showed the neck and lumbar areas that are “normal” for someone in their 60s: 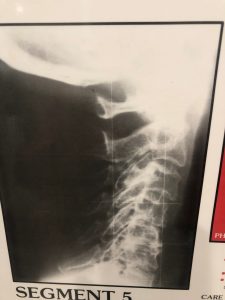 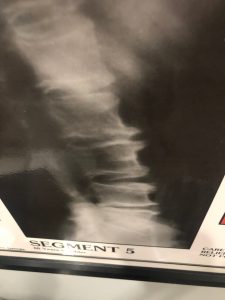 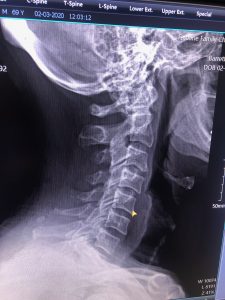 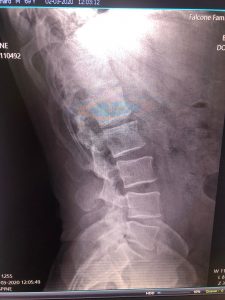 Note the clear definition on the vertebrae and the wide spaces between them, showing little or no disk deterioration. Note the wide gap between the base of the skull and the first vertebra, at the Jade Pillow Gate.

For a long time I have told students that reaching often with the niwan will actually lengthen the spine by gradually creating more space between the vertebrae. At 30, I was 5’8 3/4″ tall at full extension. At 69 I am 5’10”. That’s over an inch of growth!

When so many in my demographic are shrinking, I am taller than ever. These X-rays support my contention that we can dramatically alter our bodies, even after they have matured.

I don’t offer this to brag about my cool backbone. It is to encourage anyone who would like a healthier body, mind, and spirit to make a regular practice of Opening the Jade Pillow Gate. Give your spine a little room to work its magic.