Happy New Year! I hope you have been enjoying the holidays and that they have been filled with Love and Light.

We had a full house for Christmas for the the first time in a few years, and we had a blast. My granddaughter, Kiara, is seven now and she wanted the NYC tour. 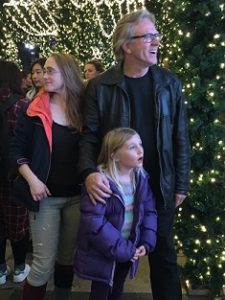 Kiara, Micaela, and Rick at Lord and Taylor storefront

We didn’t do it all, but she got an adult dose of the Big Apple. The weather was crazy warm (mid-70s one day) and that brought some unexpected guests–mosquitos! I’m serious. Mosquitos at Christmas! Lots of them.

(One persons suggested that they were imported with the Christmas tree…not enough of a frost this year to put them to sleep.) Still a few left, but I think they’re finally getting the message.

I want to take this opportunity to mark some of the events of 2015 before they slip into the fuzziness of memory. It’s been a hell of a year. Here are some of the highlights:

January. Finding You in a World of It received a nice review in the prestigious Journal of Chinese Martial Arts, edited by Nick Scrima. Business consultant Rod Colon interviewed me for his Own Your Own Career podcast. And Tom Delacy and I taught a seminar called “Breath of the Warrior” on Staten Island.

March. Energy Medicine Practicum in Killingworth, CT. This seminar was primarily geared toward practitioners in the mental health field (psychiatrists, psychologists, and clinical social workers) and was hosted by clinical psychologist/sculptor, Renee Rhodes. Since then, Dr. Rhodes and I have collaborated on several events, with more to come.

May. England’s Scientific and Medical Journal published a very favorable review of Finding You. This is a organization of cutting edge thinkers that includes the likes of Rupert Sheldrake, Ervin Laszlo, Lawrence LeShan, Karl Pribram, and astronaut Edgar Mitchell.

June. Things really took off in June. My buddy Jonathan Bricklin and I each did a presentation at the Society of Consciousness Studies at Yale University. Jonathan was a plenary speaker and kicked off the release of his new book. I demonstrated the power of meeting someone with your whole being. Check out the videos. Then Maria and I teamed up with the perspicacious Stephe Watson for our annual Scholars Garden event at Stephe’s Someday Farm in Killingworth, CT. (There’s a lot happening in Killingworth!)

July. I returned to the International Chinese Martial Arts Tournament in Orlando for the first time in a few years. I was Chief Judge for taijiquan forms and Head Referee for Restricted Step Push Hands. Had a great time! Nick Scrima does an incredible job making these tournaments happen year after year and deserves a lot of recognition and support for his efforts. Also in July I had an interview on Creative Consciousness Radio. Check it out. I did a live performance of overtone singing at Gaia’s Lament/Art Cry at the Hygeia Gallery in New London, CT. 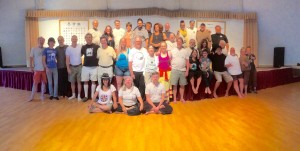 How can this event get any better? Each year surpasses the last, and this was no exception. This years theme was “It all begins with meeting.” So many people arrived early that the party was in high gear already when the it officially started on Friday night. There were contributions from so many sources this year. Thanks to all who help make this such a transformative adventure for so many.

October. The Kung Fu of Nursing. This was a collaboration with Dr. Rhodes and Nancy Reuben, M.D. and energy healer at Renee’s retreat center in Killingworth. It was Part 1 of an ongoing series designed to bring new tools to those in the front lines of the medical profession, nurses. It’s the third most dangerous profession (after police officers and corrections workers) and a physically and psychological stressful one, too. This was the brainstorm of Dr. Rhodes and Part 2 takes place January 9, 2016.

November. Peaceful Wolf Tai Chi in East Haddam, CT. This seminar was sponsored by my old friend, Sifu David Shaver and titled, “Song Kua: Awakening from the Trance.” Thanks David! 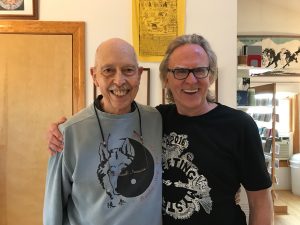 That covers the highlights. 2016 looks to be interesting, too. More work with the nurses. I’ll be hosting a weekend retreat at Kripalu, March 18-20, called “Tai Chi Alchemy: Get Out of Your Head and Into the Game”.

Tai Chi Alchemy in Sedona is scheduled for September 16-18.
And the best is yet to come!

May the new year bring you Love and Light and awaken you to new possibilities.