In my last few posts I have been emphasizing “Opening the Jade Pillow Gate” (yu zhen) at the base of the skull. Doing so unleashes the “spirit of vitality” (jingshen) and allows for whole-brain coherence and body-mind-spirit integration. It is located at the atlant0-occipital joint where the atlas (C1) meets the occiput. The closest acupuncture point is Du (GV) 16. The acupoints named “Jade Pillow” are slightly higher at Bl 9. (See blue circle in diagram.) The two Bl 10 points are probably closer to the Gate.

[I use the old school “GV” (Governing Vessel) in this post instead of the more modern “Du” to conform to the markings in the diagram.] 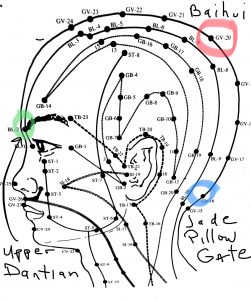 In Part Two I would like to address what I consider the major key to “Opening the Jade Pillow Gate,” at least from my experience. And that is reaching, not “hanging” from the niwan. (See below to locate the niwan.) Note that “reaching” is not “pushing.” You are not using muscular force to extend the neck. That will create stiffness and stifle qi flow. No, it is more like a vine drawn by the sun, opening and extending. When you reach with the niwan, you lengthen the tight muscles at the base of the skull, pivoting at the topmost vertebra (atlas, or C1). This easily and naturally draws the chin in slightly, an important thing for any martial artist. (Stick your chin out and it will get tagged.)

Pivoting from the atlas is desirable even from a strictly mechanical perspective. Your head is like an eight-pound bowling ball balanced on a stack of plates. Centering the head over the structural support of the neck reduces the muscular strain that happens when the head leans forward or to the side. The muscular strain that accompanies the jutting chin goes down the neck, shoulders, and back leading to many physical problems.

In my recent investigations into the niwan, I have encountered some disagreements and fuzziness about its exact location. It’s not a term that is used much, even among knowledgeable martial artists. I encountered it years ago in some writing  by Cheng Man-ching, but he didn’t go into any detail. An internet search reveals different opinions, but no substantial source references.

Niwan is probably a transliteration for nirvana, which itself is a transliteration of the Pali nibbana. Its actual location is the subject of some disagreement. Some put it at the top center of the head (around CV 22 or 21), directly up from the ears. Others place it at the baihui point, (CV 20) is where the six yang channels and the Governing Vessel (Du Mai) meet, described as  the “hundred convergences.” In this diagram from The Fundamentals of Acupuncture textbook, you can see its location at the top rear of the head (red circle). However, other sources place the baihui directly over the ears.

I have previously described the location of the niwan as the posterior fontanelle, where the occiput meets the two parietal bones (at the hair whorl). In tantric yoga, some say the posterior fontanelle is the location of the “10th Chakra,” called the Bindu Chakra. It is linked to the pineal and opening the Bindu is said to produce amrita, the “elixir of immortality.”

As you can see, the exact location of the niwan is debated. I don’t know that they are mutually exclusive. My hunch is that it is a term for what a given tradition thinks is the gateway to what it considers “nirvana.”

My primary concern is how to use this information to produce a desired effect, and that effect is opening the Jade Pillow Gate to release the “spirit of vitality.” My experience is that neck tension will “kink the hose” at the base of the skull, thus blocking qi, blood, and cerebrolspinal fluid. This leads to neck pain and headaches and closes up the Jade Pillow Gate.

However, when you lengthen and extend your neck by reaching with the crown, you “unkink the hose.” Your chin tucks in a little and you move the pivot point of head movement to where it belongs, the atlas. Many many people jut their chins out and pivot much lower on the neck, resulting in imbalance, neck tension, and a hunched over look. Over decades, the neck muscles will shorten to support this position.

You will probably feel some resistance from your body when you try to correct this. Decades of doing something a certain way causes tissue formations to support this behavior. Reprogramming your posture won’t happen in a day, a week, or a month. It’s not something you try once and your body remembers. It requires a conscious decision, over and over. It gets easier and more rewarding the more you do it, but it is something you DO…it doesn’t just happen to you.

Taijiquan, qigong, and the internal martial arts are practices in body-mind-spirit integration. That requires bringing the habitual preconscious activities of the body into mindfulness and learning to activate those dormant parts of the brain and nervous system that control them. Doing so brings us into the radical PRESENT…NOW!…and opens the doors of perception.

And the fun has just begun.