“When practicing the form, one should cause the yu-chen point at the base of the skull to stand out, then the spirit and ch’i will effortlessly meet at the top of the head.”
Cheng Man-ch’ing, in Master Cheng’s Thirteen Chapters on T’ai Chi Ch’uan

Note that in the above quote, “one should cause the yu-chen point at the base of the skull to stand out.” One doesn’t just relax it, one “causes it to stand out.”

“Yu-chen” is the “Jade Pillow Gate” and a topic I have been emphasizing lately. (See “Opening the Jade Pillow Gate” Parts One and Two.) Professor Cheng was emphatic about the importance of the energetic connection from the wei-lu (at the coccyx) through the yu-chen (Jade Pillow Gate) to the ni-wan (at the crown of the head.) He calls it “the opening of the Three Gates” It is the path to spiritual awakening.

“This is the threshold, and one can now make rapid progress towards the tao. Longevity and health then follow as a matter of course. This is the third phase of the second stage.” (p. 63)

In Chapter 11 of Thirteen Chapters, “Defining the Stages of Development,” Cheng describes the Three Stages of taijiquan development: Man, Earth, and Heaven. Each stage is divided into three phases. The first stage, Man, is the necessary process of releasing muscular tension to rely on the supple power of the connective tissue system (ligaments, tendons, fascia). The second stage, Earth, is creating a whole-body energetic connection by circulating the qi. The third, Heaven, moves beyond energy to develop spirit (shen).

“One’s mind should be on the spirit and not on the ch’i. When it is on the ch’i there are blockages. When there is ch’i there is no strength. Without ch’i there is essential hardness…The ch’i can be transmuted and evolve into the function of spirit. What is meant by force without force is spiritual force. Wherever the eye focuses, the spirit goes to0, and the ch’i follows. Ch’i is capable of moving the body without the activation of the mind, and spirit can carry ch’i with it as it moves. This is spiritual force, or what may also be called miraculous speed.” (p. 65)

I think we can clearly see the importance Cheng places on this third phase of Stage Two: “one can now make rapid progress towards the tao.” However, I think he underestimates what a big kink in the hose the Jade Pillow Gate is for most of us. Neck tension accumulates over decades and becomes so calcified we are unaware of what a huge energy block it is. “Causing the yu-chen to stand out” is not an easy task for most of us.

When muscles are used a certain way repeatedly, then over time the body-mind bundles them together with hydrogen bonds between layers of fascia. This permits us to execute familiar motions quickly and efficiently. The downside is that it also limits range of motion. That’s how we get “frozen shoulder” or “stiff neck.” When we massage the tissue to break up these hydrogen bonds, it can be quite painful, depending on how much glue is holding the fascia together. Gentle movement can repattern the connective tissue over time to permit greater range of motion and allow for smoother flow of internal energy.

Most of us have been leaning backwards since we learned to walk, weighted in the heels. What we think of as upright is almost always a backward lean. This causes the chin to thrust forward to counterbalance. Many of us spend hours hunched over a computer or slouched on a couch or tensed up while driving. Chin is again jutting forward, tensing the neck. Kinking the hose at the base of the skull becomes a default setting for most. And even consciously correcting that for a few minutes only delays the inevitable backslide. It’s a pattern developed over decades and to change that programming requires frequent correction throughout the day, not just while practicing a form.

The above video presents two simple exercises that can be done often to start the process of reprogramming the way we hold and use the neck/head by pivoting at the atlas, the topmost vertebra. Frequent repetition will gradually release the muscular tension that constricts our range of motion and blocks the qi flow. But it takes some diligence. Even after decades of practice, old patterns still kick in for me when I’m not vigilant. 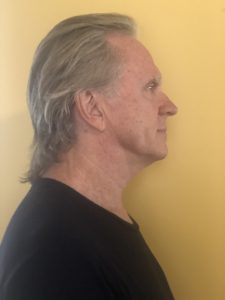 1. Wrong. Chin slightly raised and jutted forward. Hose kinked at the base of skull

1. It’s not egregious in this photo, but note that my chin juts forward and lifts slightly. This kinks the hose and blocks the Jade Pillow Gate. My neck muscles are “relaxed” here, giving the sense that it’s the “natural” position to be in. However, it’s really just “familiar.” It’s a habit from decades of leaning backwards and slouching, not “natural” at all. 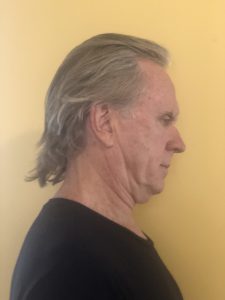 2. In the next photo the Jade Pillow Gate is opened, but the dropped chin causes the eyes to be downcast and the hose to be kinked in the throat area. Too much muscular tension. 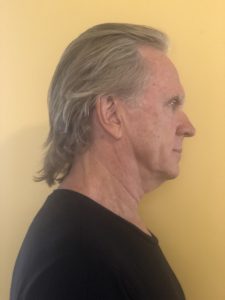 3. In this photo, the chin is tucked in rather than dropped. (See “Rooster Head” exercise in video above.) The Gate is opened and “stands out,” neck is relaxed, and there is an immediate shift in my awareness. I enter a superconscious state. Body-Mind-Spirit integration. “The spirit and the ch’i will effortlessly meet at the top of the head.”

I do this by REACHING with the crown of my head, NOT  “suspending it from above.” This is critical and something discussed in Parts One and Two of this series. “Reaching” implies lengthening and extension of the neck WITHOUT muscular tension.

Cheng advises us to “suspend the head from above,” an admonishment I’ve heard from many sources over the years. “Hang from a thread and relax the neck” is another. As I’ve discussed in the earlier blogs, this doesn’t really work. I’ve tested it hundreds of times with a wide range of people and “hanging from above” invariably kinks the hose at the base of the skull. I have no doubt that Cheng attained a very high level of body-mind-spirit integration and the “essential hardness” that accompanies that. After 40 years of study and 30 years of teaching, however, I would amend his instructions for us Westerners who habitually kink the hose in our necks.

“Reaching ” with the niwan engages the tensegrity of the connective tissue of the whole body, the “Liquid Crystal Matrix” that I discussed extensively in Taijiquan: Through the Western Gate. This establishes a whole-body energetic connection and the “spiritual force” that Professor Cheng described. It allows for the yang qi of the Heavens to replenish our vital force and open us to spiritual awakening.

That opens the door to Cheng’s Third Stage of Taijiquan development, the Heaven stage.

“The highest position receives the ch’i of Heaven, that is, the ni-wan point at the crown of the head. This can increase our spiritual ch’i. The lowest point is earth. If we receive the strength of the earth, then the important yung-ch’uan point in the ball of the foot will increase in rooting power.”

Please read the earlier two blogs in this series for further clarification. Even better: Join me at one of my seminars or at my class in Staten Island or personal instruction in a private consultation. It’s a game changer.