Marilyn from Albuquerque is reading Taijiquan: Through the Western Gate and sent me an email. “I am, of course, going around madly pointing things! If I really point my tailbone down and my crown up, I actually FEEL my centre of gravity kind of float into my lower tan tien, which until now I’d never really been sure was there. It’s amazing!”

Marilyn hits on something here that many people miss: you POINT (or reach) with your niwan (martial crown, located at the posterior fontanelle) and with the weilu (located at coccyx). You don’t just think about those points, you extend upward (without muscular tension), lifting the niwan point, and simultaneously extend downward (again without muscular tension) with the weilu point. This lengthens the spine, creates space between vertebrae, and establishes tensegrity in the connective tissue system. The latter has a unifying effect on the whole body that generates energetic coherence.

(One thing I didn’t clarify well enough in TTWG was the exact location of the niwan. I think many confuse it with the baihui at the top of the head. It’s not. It is an energy gate also known as the martial crown.It  is located at the posterior fontanelle, the “soft spot” on the baby’s head at the meeting point of the two sagittal bones and the occiput. See posterior fontanelle. )

In Chapter 17 of TTWG I write about how the opposition of niwan and weilu open the yuzhen, or Jade Pillow Gate at the base of the skull. The effect is to “raise the spirit of vitality (jingshen)” :

Throughout the whole body, the intent (yi) is on the spirit of vitality (jing shen), not on the qi.  If it is on the qi, then there will be stagnation.  One who has it on the qi will have no strength.  One who does not have it on the qi will attain pure hardness. (Note: “Pure hardness” refers to the inner power hidden by external softness: like a “steel bar wrapped in cotton.”
Wu Yuxiang  (tr. Swaim)

Energetic coherence opens the door to embracing the ‘spirit of vitality’.  It allows us to take our attention from our qi and access transpersonal and transrational states.


Raising the Spirit of Vitality

Structure can also assist in developing an awareness of shen (spirit).  A phrase pervades taiji literature that advises how to anchor a spiritual connection and orientation in the body/mind: xu ling ding jin.  Swaim translates this as, “An intangible and lively energy lifts the crown of the head.”  This point is made in various ways several times in the classics and is stressed heavily in the commentaries of many taiji masters through the years.

Yang Cheng Fu stressed it as the first of his Ten Essential Points of Taijiquan Theory.

His student, Fu Zhongwen explains this teaching:
An intangible and lively energy lifts the crown of the head.  This refers to holding the head in vertical alignment, with the spirit threaded to the top of the head.  One must not use strength; using strength will stiffen the neck and inhibit the flow of qi and blood.  One must have the conscious intent of an intangible, lively, and natural phenomenon.  If not, then the vital energy (jingshen) will not be able to rise.
This vital energy (jinshen) is often translated as “spirit”.  It is “an intangible, lively, and natural phenomenon” and clearly something that can be sensed by the adept.  Jingshen might be considered a bridge from one’s personal sense of identity to connection with Spirit in all things.

Cheng adds the relationship of three points to this alchemy, the wei-lu (sacrum), the yu-chen (Jade Pillow: the intersection of spine and skull at the base of the neck), and the ni-wan (crown of the head).  He indicates a physiological correlate: 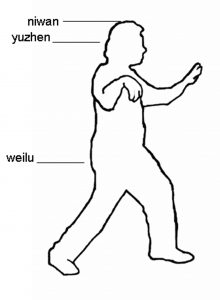 Pointing with niwan and weilu to open yuzhen

When the wei-lu is vertical, the spirit can rise to the crown of the head.  As for “causing the crown of the head to be light and sensitive”, this ability has to do with the point in the neck called the yu-chen (Jade Pillow).  This explains what the Taoists mean by “opening the Three Gates”

A related phenomenon can be routinely observed in craniosacral therapy.  This practice restores the cerebrospinal system to healthy functioning by gently contacting the sacrum and the bones of the skull.  Interruptions in the smooth interactions of these bones can have a deleterious impact on a person’s health that is out of proportion to the small changes in structure (as little as thousandths of an inch).

The therapist tunes in to the pulse of cerebrospinal fluid as it flows through the continuous membrane that surrounds the brain and spinal cord and terminates in the sacrum (dural membrane).  Osteopaths dubbed this pulse the primary respiratory rate since it sets the beat for all other pulses in the body.  CSF is pumped to the rest of the body through the nerve roots in the spine and conveys the energy and information of the nervous system throughout the body.  Andrew Taylor Still, whose research inspired modern cranial work, called CSF, “the highest known element in the body”.

Randolph Stone, founder of polarity therapy wrote:
The cerebrospinal fluid is the liquid medium for this life energy radiation, expansion, and contraction.  Where this is present, there is life and healing with normal function.  Where this primary and essential life force is not acting in the body, there is obstruction, spasm, or stagnation and pain, like gears which clash instead of meshing in their operation.

The jingshen (spirit of vitality) is what makes the whole thing work. It is the source of  “internal power.” More important, it is the source of health and long life. It’s a cumulative thing: every time you go there, you add another deposit to your “vitality account.” It is what animates your body-mind and lifts your spirit.

In a follow up email Marilyn expands on her epiphany:

“Duh !  I’ve finally realized that pointing is itself the easiest way to release any stuck energy .  I know this won’t surprise you but it amazes me !

Also, that you can  point” anything , not just joints ? For instance, I often have an unpleasant buzzing feeling in my forearms, and just now I find I can “point” it out of them quite readily. Weird but true !”

(And a new lease on life for me — I can stop worrying that arthritis is about to set in, even though it’s not usually known to strike forearms!) thank you , thank you !”

Here again, Marilyn intuits something really important: We can “point” anything. And doing so with intention and mindful awareness of the FEELING  of it immediately creates tensegrity and energy flow in the body-mind. And that “unsticks” energy stagnation and relieves pain. Maybe even more important, doing so immediately shifts the mind into superconsciousness.

And then the fun begins!