These are all terms that I have used to describe the shift in awareness that occurs when we awaken from the Trance of Objectification. (See Finding You in a World of It.) It is a topic that has fascinated me for decades, and I am not alone. Never before has there been so much research, exploration, and discussion about the process of waking up.

Sometimes thought of as the “monkey mind,” the Trance of Objectification (T of O) is obsessive rationality that renders life into stories about stories about stories. The It-mind, the “thinking” mind, feeds off itself as our thoughts beget ever more thoughts in an infinite spiral of begetting. Eventually, all we can know is just a product of our thinking. A world of illusion.

In brain research, the T of O is a function of what is called the default mode network (DMN). The DMN is a network of parts of the brain charged with automatically updating your personal narrative moment-by-moment (ego), remembering the past and imagining the future, and thinking about what others are thinking. It’s what your brain does when you are not focused on the task at hand. It is busily creating our reality seemingly on its own. When people say, “I can’t get out of my head,” they are stuck in thought loops generated by the DMN.

Not all thinking comes from there. We can actually control our thoughts. Thinking is essential to life as a human. It is how we make sense of the chaos. Millions of sense perceptions bombard us each second and our nervous system filters out what is important, focusing on some small part of the world to turn it into an object of thought. Objectification. We objectify in order to understand, to communicate, to remember, to make life easier and more meaningful. Thinking becomes a Trance of Objectification when we forget that this process of meaning-making is but a small part of our awareness, and that the thoughts about the world become more important than the actual event. My opinions about the coffee I’m drinking become more “real” than the coffee itself.

Our sensory awareness is about a million times greater than the narrow band of consciousness that thinks. And it takes a little time to render any sense information or intention into conscious thought…about a half-second. I sometimes use Lumosity, an online site that develops exercises to encourage neuroplasticity (the ability of the brain to form and reorganize neural connections). Some of the games show you in milliseconds how long you took to recognize a simple shape or remember a pattern. That half-second delay is often much longer.

Simply put, whenever we are thinking, we are making objects of thought, and our awareness is in the past. It is not directed toward the present time event. In the T of O, we forget how to be in the present. The world is objectified and in our minds we become objects ourselves. We watch the movie of our life on half-second tape delay, rather than being present for the actual event.

When so much energy goes to the DMN, it is the squeaky wheel that gets the grease. Other parts are not developed. The DMN is that “little voice in my head,” and since it is the part of the brain that talks back to us, it is the part we identify with. Ego.

But something remarkable happens when we bring conscious awareness to the vast sensory information that happens in our nervous system in each moment: we awaken parts of the brain that have been dormant or stunted in their development. New neurons are generated and new neural connections are made. When we bring conscious awareness to the sensory information, other parts of the brain perk up. The conscious mind yields to an expanded awareness that can think, but is not limited to thinking. It KNOWS without thinking. It is superconscious. We claim much more of our mental potential. (See my recent blogs on superconsciousness and the Eye of Flesh.)
I hypothesize that a heightened coherence occurs in the brain that correlates to superconsciousness. That is, more neurons from different parts of the brain fire in a coordinated fashion that allows for increased functionality and harmonious interaction. Devices that measure brain activity, like EEG and fMRI, allow us to track what parts of the brain are active under different conditions. Working with such machines is not in my skill set, but inferences can be made from some recent studies.

One dramatic example can be seen in therapeutic psilocybin research, a psychedelic sometimes called “magic mushrooms.” The drug has been encouraging in treating depression and addiction. The FDA Calls Psychedelic Psilocybin a ‘Breakthrough Therapy’ for Severe Depression. A Johns Hopkins study showed dramatic effectiveness for psychologically distressed cancer patients, cigarette addiction, and for long-term meditators.

In another landmark study from 2014 at Imperial College London, volunteers were injected with either a placebo or psilocybin. Those on the psychedelic were observed to have a dramatic shift in brain activity, based on fMRI scans. New neural connections were formed throughout the brain, and there was reduction of blood flow and electrical activity in the DMN. The subjective experience of that is expanded awareness to a feeling of awe and wonder, and a reduction of egotism and perseveration.

In a similar way to what I am suggesting with superconsciousness, psilocybin may be quieting the overbearing rational mind and encouraging activity in other parts of the brain. More important, they are talking to each other quite robustly. 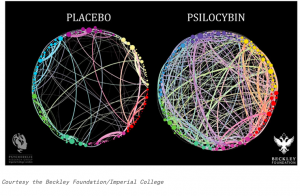 In this data visualization from the Imperial College study, the map on the left shows that brains on placebos show little neural connectivity. The one on the right show that those on psilocybin have greatly increased activity and connectivity. (This is not a picture of someone’s brain, of course. This is a representation of the data summary of all participants.)

I experimented with a variety of psychedelics back in the day, and the recent lab results confirm my experience. I am grateful for the opportunity to see “what else is possible” when we access heightened coherence. It showed that our potential is much greater than we know and has inspired me to develop ways of accessing heightened awareness through body-mind-spirit integration. My conclusion then was that we are capable of so much more, but to fully integrate the expanded awareness afforded by psychedelics a more grounded practice was necessary. That led me to Chinese internal martial arts, qigong, meditation, and energy healing.

Tripping was like a helicopter ride to the top of a mountain I had heard of but had no way of knowing. It showed the limits of pure rationality and that representational thinking can only get you so far. I learned to trust intuition, that is, knowing that is not based on rationality but comes from the integration of multiple brain functions. From those experiences, I developed strategies to control the DMN and that it was possible to realize heightened whole-brain coherence without psychedelics.

My interest now is in developing practices that are accessible, controllable, healthy, empowering, joyful, useful, and spiritually awakening. The Chinese internal martial arts and qigong have been an excellent laboratory for exploring and testing new possibilities in a safe and fun way. The effects may not be as dramatic as those from psychedelics, but the they are longer lasting and more predictable. Simple tests confirm what works and what doesn’t. New discoveries open to even more possibilities.

In Taijiquan: Through the Western Gate, I began a conversation that attempted to explain some of the mysteries of the internal arts in a more universal language, one that is empirical. This extends the conversation to include the correlations between subjective states of awareness and spiritual awakening and the physical processes that accompany them. Through body-mind-spirit integration, new human abilities and awareness become more accessible and understandable.