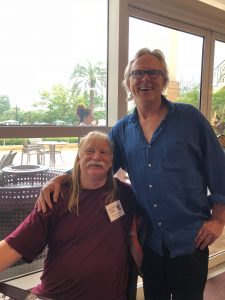 My good friend and fellow Tai Chi Alchemist, Sifu Bob Messinger, died last week at his home in Florida. His family and friends are saddened by his unexpected passing.

I choose to remember the wonderful times we had throughout the years.

Bob was a big, beautiful bundle of love, quick with a smile and a bear hug. He was curious, generous, eager, and effusive. He was also an excellent and accomplished martial artist, focusing mainly on taijiquan and liuhebafaquan (Water Boxing). He was an active organizer and participant in the push hands community in Florida and a frequent referee at push hands tournaments.

My most recent encounter with Bob was in July judging/refereeing at the ICMAC championships in Orlando. We shared laughter and a drink or two after a long day watching forms and trying to keep push hands matches between the ditches. I got a chance to hang out with Cheryl there too. 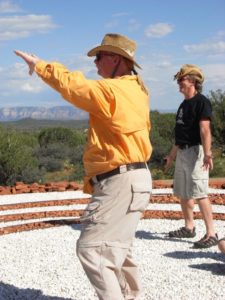 Feeling the vortex at Mago Garden 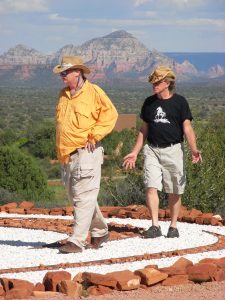 Bob was a Staten Island boy originally, but departed for Florida long before I met him. We worked a bunch of tournaments, and together with Stephe Watson, we had a ritual of meeting in the hotel hot tub for a good soak before the day’s work started. He was a frequent contributor at Tai Chi Alchemy, generously sharing his gongfu and his big-hearted hugs with any and all. He would often come a week early to camp in the desert and reconnect with nature. He set up a lot of seminars for me to teach and I stayed with him and Cheryl at their home.

We will miss you, Big Guy. The world is a better place for having you in it.
I would like to honor Bob by gathering a group for an online video conference on Zoom to sing Kaddish, the Hebrew prayer for the dead. It will be led by The Kirtan Rabbi, Andrew Hahn, a fellow Alchemist. (Andrew sang for my father when he passed.)

We will need a minyan (10 people). I’ll let you know the details soon. If anyone is interested in participating, please get in touch. We’ll also send something out on FaceBook.

Here’s a version from The Kirtan Rabbi’s first CD.