Rick Barrett Inducted into the ICMAC Hall of Fame 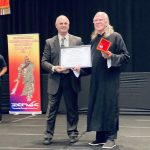 I was in Orlando, Florida last weekend for the 24th annual International Chinese Martial Arts Championships. It is an opportunity to connect to the broader Chinese Martial Arts community and to help out by judging forms and reffing push hands. I get a chance to share some laughs with old friends and see what else is going on outside my own backyard.

ICMAC is the creation of Master Nick Scrima, founder of Master Nick Scrima’s
Chinese Martial Arts Center in Clearwater, Florida. His tournaments draw martial artists of all levels from many countries, and are the best run events I have encountered. Nick is passionate and dedicated, and that is reflected in every aspect of the competition. He runs a tight ship, since there lots of cats to herd. I believe there were well over a thousand competitors this time. Here’s a view from the stage during the opening ceremony: 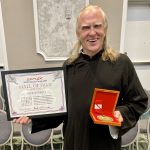 What made this particular event extra special for me was being inducted into the ICMAC Hall of Fame as a Senior Master. I joined my two teachers in the Hall: William C. C. Chen had already been inducted as a Grandmaster, and Yang Fukui as a Senior Master. It is a huge honor to be recognized by this illustrious community for my contributions to the Chinese martial arts.

I was also invited to perform a short presentation for the Master’s Demonstrations Saturday night before a large audience. Due to time constraints, I did an abbreviated version of the Wudang Tai Yi Wuxingquan. I learned it from Master Yang, who had learned it from a Daoist monk on Wudang Mountain, the legendary birthplace of Taijiquan. I had the privilege of performing it at a Daoist temple with Master Yang in 2016.

Thank you, Nick for all your hard work putting this terrific event together. I look forward to returning next summer for the 25th anniversary.