I was recently asked to clarify what I mean when I emphasize “setting” the knee to allow the kua to release, or setting the elbow to free up the shoulder joint, or setting the ball of the foot to establish energetic connection with the earth. Setting simply means “putting something in a specified place or position.” This is necessary if you wish to generate power.

Power is a difficult word for many people, particularly because it is so often abused. They even fear their own power. Popular wisdom holds that “Power corrupts. Absolute power corrupts absolutely.” Fear of the “dark side of the Force” causes some to reject the whole Jedi idea and never leave the moisture farm on Tatooine. Many gentle taiji souls politely excuse themselves when talk turns to the amazing power that this martial art can generate, even though that is the well that the water is drawn from.

Power has gotten a bad reputation. Many consider it distasteful. It’s actually a neutral term, meaning “ability to do or act; capability of doing or accomplishing something.” That covers a lot of territory. If you want to do ANYTHING, power will be required. Taiji wisdom includes the ability to know the appropriate form and amount of energy for the situation. Different energies are required to calm a toddler throwing a tantrum than to intercept a punch thrown by an angry drunk. Moving a refrigerator is different from moving en pointe in ballet, but both are accomplished through power.

Power comes from assigning time and space to matter and energy; in other words, “putting something in a specified place or position.” Think about that a moment. Even if we are talking about the power of a volcanic eruption, or the sun’s heat, there is matter and energy and space and time. More important, there is a conscious being making up a story about that event. The power of the volcano is a yang expression of heat and lava and debris spewed forth from a stable (yin) location. The sun is considered the stable point around which Earth revolves, but is itself merrily chugging through the galaxy. The radiation that it projects only has power because the sun itself is locatable.

Consciously controlling something, especially your body and mind, is the key to personal power. In most human movement, joints are not set consciously. It is done habitually and/or instinctually. In contrast, taijiquan emphasizes conscious movement. You shift off autopilot to consciously control movement in more effective ways. We are reminded in the classics that conscious movement is a hard thing to do, but is essential to accessing the spiritual awakening promised.

After grasping conscious movement, we can begin to interpret energy, and finally from interpreting energy, proceed to spiritual illumination. However, at the beginning of practice, we must gain an understanding of conscious movement, which although it is part of our natural endowment, is very difficult to grasp. [Emphasis added.]

Last year I wrote a series of blogs about the importance of zhou, elbow jin. Elbow jin is something that is rarely discussed, yet is profoundly effective. It is the key to unlocking muscular tension and energy blockages in the shoulders. Almost universally, arm motion is habitually initiated by pre-conscious contraction of shoulder muscles. Even when we know better, it is hard to override this old, old impulse. We don’t realize it, but this sets the shoulder as the pivot point. It is disadvantageous mechanically because the arm becomes a long lever with the fulcrum at the shoulder joint, where the muscles are not very strong. More importantly, muscular constriction there reduces qi flow to a trickle and weakens the arm even more. Trying to issue power from a compromised shoulder often results in injury. (I speak from experience!)

By contrast, when we mindfully reach with the elbow and set it in a position that uses the arm most efficiently, unconscious shoulder tension can be released. Effectiveness is increased dramatically and with little effort. The elbow then becomes the stable pivot point that grants the arm a sinewy strength.

Similarly, consciously setting the knee over the ball of the foot establishes a stable foundation that can allow the kua to release. Kua can be thought of as the intersection of the thigh and torso at the inguinal crease. When we don’t mindfully set the ball and the knee, the hip stabilizes with muscular tension. Locked-in hip tension is even more prevalent that in the shoulder, resulting in health issues as well as loss of power and range of motion. Qi flow between legs and torso is significantly blocked.

Song kua means releasing the impulse to push away from the earth through muscular contraction, and to instead relax into the intrinsic support of the connective tissue system. This is very difficult to do unless you trust the support below it. Intentionally establishing Ball > Knee > Kua as a sequence, each time you change position, goes a long way toward creating a reliable foundation. If the foot is not securely rooted (at least for the moment), everything above it is unstable. If the knee moves around, then other parts of the body are charged with the task of keeping the ship upright.

Setting a joint doesn’t mean to make it rigid, inflexible, or permanent. As in all of taijiquan, fluidity and flexibility are essential. But in the moment when power is issued, the yang expression requires a yin base to extend from. That base might also be in motion, but will be relatively stable by comparison. For example, the whole body may be turning, but the elbow is set relative to the shoulder and the hand. That allows for energy to be transferred from the legs and torso to the hands, uninterrupted by muscular tension in the arms. “Insufficiency” is just as problematic as excessive tension, and lack of reliable support collapses the structure. Setting the elbow, for instance, allows one to maintain structure without excessive tension.

It is important to reiterate that “setting” is not absolute. It is establishing a position that is stable in relation to something else. Dynamic fluidity pervades taijiquan. We seek the stillness in motion, and the motion in stillness. Yin includes yang includes yin… “Every point each has its own substantial and insubstantial.” We consciously choose which aspect to emphasize in any given moment.

It is by holding consciously holding poles in opposition that energy is created. 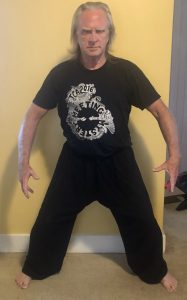