Setting the Knee (Part One)

I have long advised taijiquan practitioners to consciously “Set the Knee” before loading the substantial leg. Meaning, you make sure that your structure is in place before you put weight on it. The knee should be in the optimal load-bearing position before asking it to handle not just the weight of the body, but also the force generated by the powerful muscles of the legs, back, and buttocks.

The habitual patterns established long, long, LONG ago tend to override that simple instruction and filter it out. It requires a conscious decision to tell your body to do something different than it has been doing for decades. It also demands that you develop the confidence that your substantial (weight-bearing) leg will support you as you make a conscious “empty step.” Even after thousands of hours of form practice, many just aren’t that certain that the substantial leg won’t just crumple under while making an unweighted step.

Lots of compensatory strategies are used to assuage that pre-conscious fear. In this two-part post, we will examine some of those and some of the problems that arise when we don’t set the knee. But first, I’d like to share a section from Chapter 18 of Taijiquan: Through the Western Gate, “Set the Knee.” Please read (or re-read, or re-re-read) first. There are some important points made there that I would like to build on going forward.

How can you get a felt-sense of the kua?

This is very difficult as long as you depend on the kua to support and protect the body. It tightens up when you really don’t trust the support below it. Improper knee placement, plus the tendency to move the knee of the supporting leg wreaks havoc.

Used properly, the knee is a very strong joint. It is not, however, designed to carry much weight, but rather to transfer it. That is the primary function of any joint.

Knees are often abused because people don’t understand their basic functioning. Observe people’s habits as they stand. Once you leave a taiji environment, you will find that most people lock their knees while standing. They aren’t even aware of it. Locked knees mean more wear on joints and less work for leg muscles, which atrophy as a result. The knee is misused when it is called on to bear weight rather than transfer it. Knees should always remain unlocked with any load supported by the leg muscles. This stance tones the legs and limits the wear and tear on the joints. More important, locked knees “kink the hose,” blocking the flow of qi, not just in the legs, but throughout the body. Muscles tense to compensate for structural instability.

When the knee of the supporting leg is bent in a taiji posture, it should be immobilized while force is being transferred. (Photo 17b) It then becomes the pivot point for the fluctuating forces. It is like a post driven into the ground with a hinge on top. It is remarkably powerful and responsive when not required to do the additional work of stabilizing the body. Force passes through the knee, down the post, into the earth. 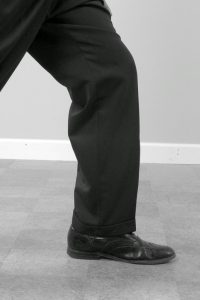 If the knee moves, then the pivot shifts lower—to the ankle. The ankle is a much weaker joint and requires a lot more muscular effort to maintain it. This effort is felt in the legs, kua, back, and on up. Simple admonitions to relax are fruitless if we don’t trust the support of the structure below.

So the key is to first set the knee. That is, you want to have the knee of the substantial (weight-bearing) leg in the desired position before you shift your weight into it. You should express energy only after establishing this firm foundation. Otherwise, the pivot will shift to the ankle or foot, which puts a huge strain on their relatively weak connective tissues. That not only makes you susceptible to injury, but also significantly reduces the flow of qi.

Joint effectiveness depends on proper alignment. A load should pass through the joint in the most efficient way possible. That requires some awareness of joint angles. Incorrect alignment may “kink your hose.” 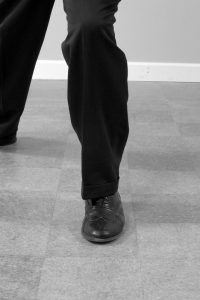 The knee is strongest when centered over the inside of the foot, the medial line. (Photo 18) Big bones are designed to handle big stresses, and the foot is no exception. The big toe and related bones are larger than the others for a reason. They are designed to handle the bulk of the load placed on the foot. The rest of the weight spreads over the remainder of the foot. The longitudinal arch along the medial line provides much of the springiness of the foot. (Fig. 5) Many people have a tendency to transfer weight to the outside of the foot, the lateral arch, which is not designed to handle such a big load. Putting weight there strains everything above it, leading to many health problems.

William Chen uses the image of three nails projecting down from the foot to energetically anchor it, as depicted in this illustration. (Fig. 6) Imagining these three nails as anchors is a way of using the powerful structure of support along the medial line. This area doesn’t do all the work, but it effectively organizes the forces on the foot, allowing the “bubbling well” in the foot to open. The “bubbling well,” or “bubbling spring,” is the kidney acupuncture point (yongquan), and it is considered one of the five primary “energy gates” in the body.

Students should try various positions to determine which gives the most rooted base, requiring the least maintenance. Obviously, if you are bowlegged, you will place your knees differently from someone who is knock-kneed. Each person’s structural variations must be addressed. Energetic coherence should be the guiding principle, rather than mere replication of apparent body positions. If the knee has to strain to establish a position, the qi will be blocked and the structure above it will be weakened.

In the following photographs I demonstrate the knee position for two variations of a “Single Whip” posture, in the Cheng Man-Ch’ing style (Photo 19) and the Chen style. (Photo 20) Notice that in both styles the knee of the substantial leg does not project too far forward. If the knee moves off from the perpendicular, it weakens. The posture can be done with the knee further forward, but that requires more effort and maintenance, and it may be injurious. 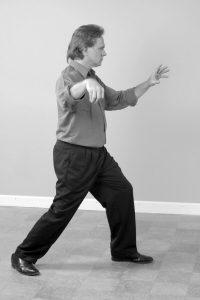 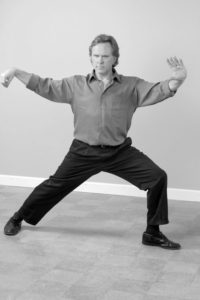 Taijiquan seeks to follow nature via the path of least resistance. The unfamiliarity of some positions may make them seem completely unnatural to the beginner, yet students who adhere to taiji principles will eventually find a deeper body wisdom that allows for fluid grace and effortless power.