I devoted a chapter to the kua in Taijiquan: Through the Western Gate and it’s time to clarify what is meant by song kua. (pronounced soong) I recently posted the steps to take to get more from your kua and I’d like to sharpen the focus a little here.

For years, I have been telling students to “release” the kua in preparation for any movement. And that is still true. But don’t stop there. “Releasing” gets you out of the habitual hip tension that prevails in our culture. (I blame it on the flush toilet. In China, where you squat over a hole in the ground to do your business, you don’t have to introduce someone to their kua. They use it every day. In the U.S., we perch high on our porcelain throne.)

The kua is another one of those things that is hidden in plain sight. Even long-time students can miss it. Until you get a real feeling for song, you never quite relax enough to feel the support of the kua. So even if your hips are bent properly, they may still be held rigidly, so the full effect is not realized. Guidance from an instructor who is familiar with song kua is very helpful.

There is a psychosomatic response to lock up the pelvis when we feel stressed. We pull in to get a sense of security. Watch someone near the edge of a high platform. He will often tighten up to secure his position and maintain balance. It’s an unnecessary and counter-productive response, yet it is programmed into the reptile brain, and kicks in automatically. Those savvy about heights will recognize this and consciously override it. The impulse is still there, but consciously controlled. People lock up in public speaking, job interviews, talking to an attractive member of the opposite sex, or any situation that seems particularly threatening.

We get “tight-assed” when stressed.

First step is to bring awareness to what has become a subconscious program that may be running 24/7 (yes, even while sleeping). You may be “driving with the handbrake on.” Yet, if you don’t know of an alternative that you can trust, the very fear that kicks in the stress response will keep you locked up. Then you consciously release. You relax the muscles of the hip area.

However, it kicks back in again whenever your attention is called elsewhere. That’s because you have invested decades into doing something a certain way and that will reassert itself the moment you aren’t looking. To make the shift more permanent gongfu is required (see last post “Gongfu: Thinking. Feeling. Being.”) To change something so fundamental, you have to show the body-mind that you are serious about it.

The step beyond release is song. Song (sung) is often translated as “relaxation,” but that is only a partial understanding. What am I relaxing into? Do I collapse into a water-filled skin bag on the floor? Or do I relax into a particular form? What supports that form?

In TTWG I answer this by defining song as “Relaxation into the support of the connective tissue system.” (CTS) It’s a passive support system that uses the principle of tensegrity to distribute the load throughout the body. For example, if I try to “ward off” using my muscles, the force is generated locally and energy gets stuck in my shoulder and elbow. When I use the CTS, the whole system takes the load and energy passes through the joints easily and fluidly. 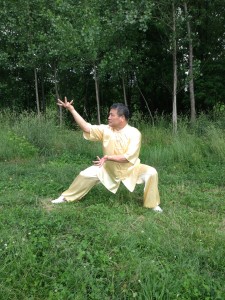 Since we first learned to stand and walk (around a year old for most of us, give or take), we have been using our muscles to push away from the ground in order to overcome the pull of gravity. Since that downward pull is pretty constant, so is the resistance to it. It’s a pre-conscious  program so deeply imbedded that we are mostly unaware how much energy we expend doing it. The body-mind gets frightened when we turn off the resistance.

Song kua asks you to do something counter-intuitive: instead of resisting gravity, how about releasing into it and trusting that your body will still be able to remain upright. When done correctly, the result is surprising: you are able to handle much more of a load than with muscular resistance…and with less wear and tear on your joints. Song kua also opens the flood gates and lets beaucoup qi circulate in your body.

Song is not just “relaxation.” It means sinking into the intrinsic support of the Connective tissue system. I get into that pretty thoroughly in TTWG and elsewhere, so I won’t do that here.

I do want to give you a simple exercise to actually feel song kua. It’s not just something you think or imagine…ya gotta FEEL it…again and again. Eventually you learn to trust it, even stressful conditions (gongfu).

Luckily, you don’t have to wait years to reap the benefits. Like so much we do in the internal arts, you feel the effects of your labors as you go along.

1. Start by pushing away from the earth using your legs, like you are trying to reach something on a high shelf. Get up on your toes, heels lifted.

2. Now drop suddenly and feel the impact of your heels hitting the ground reverberate up your legs, back, and out your arms. Don’t try to cushion the impact with muscular resistance. It’ll feel like a gentle shock wave passing through your body.

3. Pause and feel the weight settle into your hip joints. Notice any muscular tension that tries to creep back in and let go of what you can.

4. Repeat as needed until it feels less foreign to you. It takes a bit of practice to get the hang of it, despite its actual simplicity.

Now try it in a bow stance:

Let me know how it goes for you. Come see me for a class or seminar and I’ll be happy to tune up and test your song kua. You won’t believe how much more you can get out of each movement.