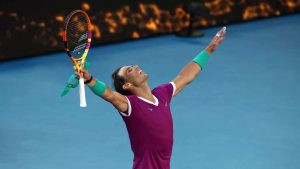 It was after 1 AM, Australian time, when the 2022 Australian Open men’s tennis singles final was completed after five hours and 24 minutes, the second longest finals match in the history of the tournament. Thirty-five year old Rafael Nadal outlasted the heavily favored Russian, Daniil Medvedev (ten years his junior) after having been completely outclassed for the first two and a half sets. The six-foot five inch Medvedev is the best hard-court player in the game right now and he looked the part. The Spaniard faced elimination in straight sets, and the momentum was all against him.

The commentators repeated several times how it was kind of miraculous that Rafa was even playing. Foot surgery just a few months earlier for a chronic condition left him wondering if he would ever play again, and he wasn’t alone in his doubt. He could only play a handful of tournaments last year due to that injury. He was sick with COVID-19 in December and had little time to train. It was perfectly understandable that at the end of his illustrious career that he would not have the gas to get over the hill.

But then he did. He did a big reset and began chipping away, one point at a time. Every point was the ONLY point. Shots that had previously been easily handled by the Russian were now scoring. Medvedev made mistakes, his earlier swagger disappearing as he entertained the remote possibility that he might snatch defeat from the jaws of victory.

Highlights from the pivotal third set:

The stakes were incredibly high. In addition to the thousands of screaming, emotional fans present in Rod Laver Arena, there were millions around the world wanting to see history made if Nadal could only persevere. At stake for him was an opportunity to set a new record for the most men’s Grand Slam tournament titles, having been locked in a tie with Roger Federer and Novak Djokovic at 20. His two rivals had both failed in their attempts to reach 21, and now the pressure was all on Nadal. Cameras recorded every facial expression, every mistake, every emotion. Each movement was analyzed and dissected by commentators, with lots of speculation about mental and emotional states.

And you are ALL ALONE on that court! How do you stay in present time and play your best when faced with that stress?

As a tennis player, I have been fascinated by Rafael Nadal since he broke into the limelight as a teenager winning the French Open. There was something special about the guy. A Spanish newspaper said about him when he was just starting out: “He gives his all, never gives up on a point and still seems less exhausted than his opponent.” That remains true today, even after a long career with many injuries.

He once said, “I learnt during all my career to enjoy suffering, and these kind of matches are very special. You don’t have the chance to play them every day. So when they happen you suffer, but I really enjoy these moments.”

What Rafa calls “suffering” is the sacrifice you make to surprise yourself about what you are capable of. You know going in that you will face challenges that pull you way out of your comfort zone, and you learn to love the opportunity to explore this new state of being.

The body is heavily stressed playing in the hot Australian summer. Earlier in the week Nadal played another five-set match and sweated out nine pounds. In a match at this level, he must be able to shift from returning a 135 miles per hour serve to sprinting to the net to track down a soft drop shot to slamming a 4,000 rpm forehand all in a few seconds. Then, in less than 25 seconds, be ready for the next point, and it starts all over. Some rallies can go 40 or 50 shots.

One’s ability to sustain that level of stress over hours requires an ability to control one’s nervous system. Those who can’t do that find themselves unsuccessful at this top tier of athletic competition, regardless of their fitness and athletic ability. Even an amazing player like Medvedev was unable to close the deal, despite his overwhelming advantage in the finals.

Arthur C. Clarke’s Second Law: The only way of discovering the limits of the possible is to venture a little way past them into the impossible.

That is the way of Gongfu. It is only through stressing a system that growth is possible. (see “Stress is Not Your Enemy”) This comfort zone is homeostasis, the tendency of the body-mind to return to a familiar state of relative equilibrium. This is the Yin principle at work, and it is absolutely necessary for our health and well-being. But if we get stuck there, there is stagnation. When we reach for something more, that is the Yang principle in action.

To push beyond our limits, we must be willing to tolerate the feeling of leaving our comfort zone, the familiar, and explore what else is possible. Or, as Nadal colorfully puts it, “Enjoy suffering.” This idea is similar to the Gongfu expression, “Train bitter.” That is, be willing to push beyond your preconceived limits into the uncertainty and discomfort beyond, AND to joyfully embrace the transformation that is occurring.

What Taijiquan trains is the spirit. Therefore, it is said: “The spirit is the commanding general and the body is the emissary.” If the spirit of vitality can be raised, the movements will be light and agile.

I believe that it is conscious awareness of feeling and movement that is the body-mind alchemy that opens the Eye of Spirit, superconsciousness. It is in this state that the wonders of the internal arts may be experienced. “The spirit is the commanding general and the body is the emissary.” The “commanding general” is not always present and ready to take charge. There is a shift that must occur to access the supranormal abilities that take us to a new state of being.

There are many faces of spirit. The face we are talking about is Shen, the Yang, creative aspect, the “commanding general.” It is what we mean when we summon the “fighting spirit,” the ability to overcome great obstacles and manifest qualities that we don’t know we have. It is the intangible spirit of a champion. I think many people fear competition because this fierce warrior lies in wait. They haven’t yet found out how to integrate the fire of Shen with love and compassion. To know this part of yourself you must sacrifice something. You must “invest in loss.”

Nadal embodied Shen when facing elimination, down two sets to love. Doubt disappeared, replaced by a presence and intensity that very few can match. There was no room for error. Already fatigued, he knew that if he were to somehow win the current set, there would be at least two hours more of very physical play. There is always an inner conversation and a choice. Most of us would be content to bow gracefully. But this is his Gongfu. He “trains bitter.” The “commanding general” awakened just in time to rouse his tired troops and do what needed to be done.

“These kind of matches are very special. You don’t have the chance to play them every day.” Nadal knows that he cannot play forever at the level that is fun for him, so it’s carpe occasionem (Seize the opportunity!) It is what he lives for: not the victory, but the struggle. Win or lose, he is on the practice court as soon as he can, practicing his Gongfu.

We each have opportunities to extend beyond our comfort zone and explore what else is possible for us. It doesn’t have to be on the big stage. Without stress there is no growth. We get to choose how much Shen we welcome into our lives. It may be as simple as fully engaging your Taijiquan practice with your whole being. Or writing that poem. Or cleaning the basement. Whatever game you choose to play.

It is up to you how much of the immeasurable becomes reality for you.  Martin Buber