Stress is Not Your Enemy 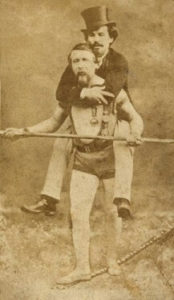 In the photo to the right, the great funambulist Charles Blondin walks a 1,300 foot tightrope across Niagara Falls with his manager on his back. Another time, he carried a cookstove out over the  center of the Falls, built a fire, and proceeded to cook an omelet. He also crossed doing back flips and somersaults, walking backward, and with a sack over his head.

Stress is not your enemy. In fact, stress is essential for good health and a satisfying life.

This is a message I have been championing for decades, despite the prevailing opinion of the medical community and the popular health paradigm. Stress is too often seen as the biggest cause of ill-health and mortality and something to be avoided, controlled, or coped with. Headlines scream, “Stress Kills!” and “Public Enemy #1.”

I say, “Without stress, there is no growth.” Stress occurs only when something means enough to you to care about what happens. Stress is intimately entwined with a meaningful life.

I offered this heresy in a recent seminar I taught for nurses and other healthcare practitioners. I even said, “Stress is my friend.” One nurse countered with, “What planet are you from?” It was an idea that ran counter to everything they had heard to date. I’m not sure how many people in that room were persuaded by my logic. I know that it got a few thinking about it.

One nurse dismissed it by saying, “That may be true for you because you’re a martial artist.” She may have been on to something. We deliberately put ourselves into stressful situations so that we can learn something. In taijiquan one is often exhorted to “Invest in Loss.” That doesn’t mean to practice losing gracefully; it means to be willing to put yourself into seemingly lost positions so that you can learn how to overcome them.

As fate would have it, two days after the seminar I heard an interview on NPR with Kelly McGonigal, a psychology professor at Stanford University. She said that up until about ten years ago, she considered stress as the enemy, then had a rude awakening. She came across a 1998 study of 30,000 U.S. adults who were asked how stressful their lives were. Then they were asked if they considered stress to be harmful. The study followed up eight years later by checking public records for deaths.

This startling study got Dr. McGonigal thinking. She began to investigate other research into stress and found that those results overwhelmingly corroborated it. Far from being “The Enemy,” stress is an essential adaptive mechanism that enables us to meet the challenges of life and continue to evolve. Those who consider it unhealthy and dangerous are the victims of of their own mindset.

The evidence is overwhelming. In her excellent book, The Upside of Stress, Dr. McGonigal explores how stress got to be so misunderstood. Much of the early research depended on brutalizing rats and extrapolating their responses to humans. There is a certain kind of stress to be being almost drowned over and over, or being electrically shocked arbitrarily. Stress is not always life and death. And humans have more nuanced responses than rats to the broad spectrum of stresses.

When done right, making love is stressful. The heart pounds. Breathing quickens. Stress hormones are released. “Ask your doctor if your heart is healthy enough for sexual activity,” warns the Viagra commercial. La petite mort, French for “the little death,” is used to describe sexual orgasm and the state just following it.

But one of the stress hormones released during sex, oxytocin (the “cuddle hormone”), is actually important in cardiovascular health. Dr. McGonigal writes, “The heart has special receptors for oxytocin, which helps heart cells regenerate and repair from micro-damage.

When your stress response includes oxytocin, stress can literally strengthen your heart.” Oxytocin enhances our social function, our empathy, and it also makes us more courageous by dampening our fear response. We get a hit of oxytocin when we hug someone, but we also feel it in an emergency. Witness the compassion and caring that emerges from strangers after a natural disaster.

Great sex leaves you transformed. The world is a happier place. You feel a connection that extends beyond your partner. But to experience its transformative power you have to be willing to experience the excitement (stress) that cues the body-mind to engage in the alchemy of love and physicality. Fear and resistance short-circuit the magic.

The Restorative Power of Stress

After any stress, there is a recovery period where homeostasis is restored and the system goes back to normal. But it’s a “new normal”–one that includes the prior experience. We have learned something. DHEA, a neurosteroid, is released in stress. It improves brain function and helps us make sense of what just happened. According to the Mayo Clinic website,  “Lower DHEA levels are found in people with hormonal disorders, HIV/AIDS, Alzheimer’s disease, heart disease, depression, diabetes, inflammation, immune disorders, and osteoporosis.”

When you exercise vigorously, you stress your body and afterward you rest and recover. The stress of the workout provides a challenge designed to change you physically. Certain neurotransmitters (norepinephrine, serotonin, dopamine) may give you a pleasurable feeling, maybe even a high. When you rest, you get a chance to integrate that experience and experience a change.

Stress is not the Devil. It is an important part of a happy, meaningful existence. We deliberately put ourselves into stressful situations in order to be challenged and grow. Too little stress (boredom) can be more harmful than too much. There is an optimum range that permits growth and fun. The first step to finding that sweet spot is to recognize that

Stress is not your enemy.