Wow! Thanks for all the support and encouragement from so many of you to make Tai Chi Alchemy 2012 such a wonderful, inspiring event. It was like a pebble dropped in a still pond, its ripples reverberating out into the world. This was our eighteenth chapter in the TCA story and it did not disappoint. 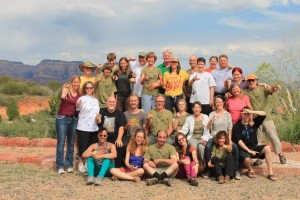 Before I get to details about the weekend, I would like to specifically thank those who provided generous financial contributions during tough economic times. It has long been our policy that money should never be a reason not to attend, and that was put to the test. More people than usual required some help to make it happen, and help was there. Many thanks to Margaret Westlake, Guru Mike Casto, Victoria Drumbakis, Linda Addison, Scott and Valarie Gabel, Lynn Sharp, Nick D’Antoni, Sharon Bristol, Richard Thomas, and Ethan Deford for your generosity. (If I have forgotten your name here, please accept my apologies. I’m writing from memory.) Thanks also to Margaret and Mike for opening your home to so many weary pilgrims. And to Ann McGuffey for taking charge of setting up the Sunday dinner. And to Linda for organizing and running the TCA Poetry event with so much grace and humor. These are but a few of the people who gave so much of their time and energy to make things run smoothly.

Such an outpouring of warmth and love and creative spirit! Over half of us showed up a day or two early to soak in the inexhaustible opportunities Sedona presents. The town has gone through many changes in the twenty years that I’ve been going there. Those of us who remember the two-lane blacktops and the metaphysical-UFO-hippie-Native American vibe of years past are often put off by the slickness of the “new” Sedona eager to attract the money that the “luxury spa” crowd brings in. But that veneer chips immediately when you wander far enough from the Enchantment Resort and out to where the magic still awaits.

We met Friday am at the Coffee Pot Restaurant to greet arrivals with hugs and smiles and then were off to Bell Rock/Courthouse Mesa/Baby Bell to reacquaint with vortex energy. Everyone gets to wander these wonders at their leisure and follow the energy according to their own inner compass. These masses of stone change at a different rate from you and I, and I never tire of checking in with these venerable teachers. Big shift from NYC.

We were greeted warmly by the staff at Mago Garden after a ten mile ride back old Bill Gray Road (where it gets VERY quiet and dark and the stars are tiny holes punched through black velvet). The Mago folks take great pride in the aesthetics of the place. When we started there in 1994, it was the home of the Sedona Method and quite austere and rustic. The rooms are now clean and comfortable and the grounds are exquisitely landscaped. Even the drainage ditches are lined with colorful indigenous stones in pleasing patterns.

Through the years TCA has evolved to embrace and include offerings from many of our talented participants. There is something thrilling about presenting something you are passionate about to such a discerning yet supportive group. Highlights? Too many to mention, but let me try anyway.

Guru Mike Casto, master of Philippine and Indonesian fighting styles, led off his segment with a Strain Prevention routine he learned from Scott Sonnon. It opens and lubricates joints throughout the body. This was followed by a series of hand drills tradionally called hubud lubud, and develops coordination, flow, trapping and not getting trapped, tactile awareness, and more. Mike had re-worked them to bring his own flavor. I had a lot of fun and found my brain working full speed to integrate these new patterns.

Andrew Hahn, the “Kirtan Rabbi”, once again unfolded the mysteries of yiquan meditation in his own inimitable style. His “Six Directions” meditation was powerful, transcendent, and transformative. His explanations strip away confusing jargon and make the teaching accessible to all. Later in the day, he played guitar and led the group in a Sufi-style song/dance.

Maria Barrett led the group in a guided healing meditation for all those we know who are experiencing difficulties right now. She followed that with an amazing group EFT (tapping) session. Scott volunteered his knee pain as the focal point, and Maria skillfully guided him and the rest of us through a simple, yet powerful form of “energy psychology”. EFT taps acupuncture points with the fingers while drawing attention to areas of physical, emotional, and psychological concern to release the stuck energy and neuropeptide patterns that fix them in place. Scott’s chronic knee pain (29 years!) was reduced about 50% and many of the rest of us (myself included) experienced complete relief from our aches and pains.

My personal favorite for the whole weekend was the surprise offering by young Micaela Barrett. She makes no secret of her total passion for Argentine (not ballroom) Tango. By popular request Ceili agreed to do a short intro. None of us were ready for her concise, coherent integration of Argentine Tango and T’ai Chi. She incorporated the principles of The Edge and “meeting” to create a magical energy and consciousness exercise. She even shattered fixed gender roles by having us take turns leading and following. It cultivated t’ing jin (listening energy) in a novel, fun way. I hope she’ll do more next year.

BTW: We are scheduled for September 20-22, 2013 at Mago.
Ok. That’s enough for one blog. I still have more to report, so will have continue this in another entry.

I’d love to hear other favorites/ highlights from others who attended. So many to choose from!