It was the trip of a lifetime for me.

Last spring my friend/teacher, Master Yang Fukui, suggested we visit Wudang Mountain, the legendary birthplace of taijiquan. We would also visit his hometown of Tianjin, another place with a rich martial arts history (see Jet Li’s film Fearless).  Sign me up! I had visited Beijing in ’99, a great trip, but going to Wudang with Master Yang was like a back stage pass to a world I could never access on my own.

Maria was immediately up for the adventure, and so were some Tai Chi Alchemy regulars: Jonathan Bricklin, Mike Ricciardi, and John Sarnes. We flew out on Yom Kippur, so The Kirtan Rabbi, Andrew Hahn, arranged to meet us there one day later.

We got off to an explosive start. The first morning we were there, a bus full of martial artists in uniforms and gear rolled up to our hotel in Tianjin at 7am to take us for a 1 and 1/2 hour ride through the countryside to the 132nd anniversary of the school started by Master Yang’s great granduncle, Zhai Yongwen. 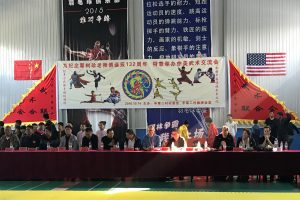 Guests of Honor in Hubei

There was an enthusiastic turnout for the celebration, including local government officials, and we were seated at the Guest of Honor table under Chinese and American flags. As Americans we were instant celebrities and asked to pose for hundreds of photographs. That we did Chinese internal martial arts was an added plus. 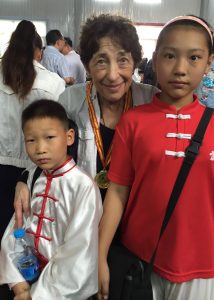 There were dozens of demonstrations by local martial artists and we were asked to perform as well. We did William C. C. Chen’s 60 Movements as a group (see video above) and I did the Luoxuanzhang form I learned from Master Yang. We were a big hit. 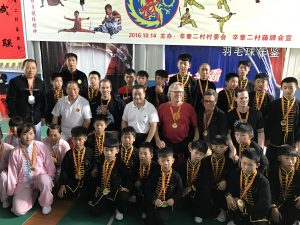 Posing with medalists in Hubei

Afterwards, the celebration moved to an exquisite restaurant for a 20-course banquet served at a 25-foot diameter table hosted by the Hubei Martial Arts Society. We were surrounded by dozens of high level martial artists and a few government officials. There were endless toasts of baijiu (“white wine,” made from fermented sorghum and grains, 50-60% alcohol.) Master Yang tempered my enthusiastic participation while showing no such restraints himself. (Perhaps for the best. I was able to walk a straight line when we left. He knew how to navigate those perilous waters and appeared undisturbed by all that fermented sorghum.) We were all really impressed with the graciousness and generosity of spirit that greeted us wherever we went.

We returned to Tianjin and after a short break at the hotel, we visited Master Yang’s apartment and extended family for a hint of adventures to come. We were off to a great start.