Tai Chi Alchemy in Sedona is an event unlike any other.

TCA 2014 was amazing, even by TCA standards. The coherent love-space that pervaded the whole weekend fostered a safe, creative environment. Participants stretched each other to awaken to the genius of themselves. 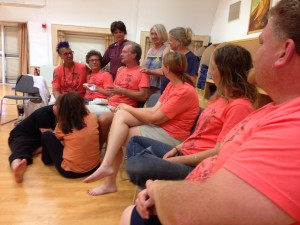 The tone was set Thursday evening when  The Kirtan Rabbi (Andrew Hahn) performed his own special brand of love-based ecstatic chant to a yoga studio in Sedona.

About half the participants were early arrivals for TCA. Andrew blew the house away with his call-and-response kirtan and that vibe continued throughout the weekend. We floated back to the Sky Ranch Lodge.

Each year I have been advised to make TCA more structured and predictable, thus more accessible and inviting. Knowing who is presenting what and when would allow people to attend those seminars that interest them. Makes a lot of sense. But any time I have tried to format things more precisely, Sedona quickly advised me otherwise.

The place has its own agenda, and there is only so much of your will that can imposed and still maintain a working relationship. That’s my story, anyway.

So TCA is more like improvisational jazz than a classical symphony. The notes each instrument plays for a symphony are established well in advance. Jazz establishes a theme and invents new relationships to that theme. I am forever surprised and delighted by what arises from this group when the alchemy gets cooking. We feed off each other and explore stuff that wouldn’t come up in a more structured format.

Sometimes I know a TCA theme months in advance. This year I didn’t have one until the rabbi asked me on Thursday. “We always do better with a theme,” he noted. Of course. It hit me a couple hours later: “Get out of your head and into the game.” When I introduced that idea at opening circle, there was near-unanimous agreement. It struck a resonant chord. It’s also a major element in my new book, finding You in a world of It. When we think about stuff, we are not participating in the event. We must distance ourselves to “put it into perspective.” When that’s all we do, we are “stuck in our head.” In non-participatory consciousness, every thing and every person is an object…including ourselves.

In participatory consciousness, we move into relation with some one or some thing. It includes non-objective awareness. (The “Zone” and “Flow” are terms some use to describe participatory consciousness. Action seems effortless in those states. Time and space seem altered from our normal awareness.) Energies and information become available that cannot be found in our normal state. We intuit better. Synchronicities abound. Under the right conditions, our effective power can dramatically increase.

At TCA 2014, we got a lot of practice shifting between objective and non-objective awareness.

When we engage something or someone in participatory consciousness, I call it meeting. One exercise to demonstrate and develop the power of meeting was something I had only recently discovered from our Wednesday class in Staten Island. It was a shock even to those who have been studying with me for decades. How would it go over with people who had no familiarity with t’ai chi or any martial art, much less the woo-woo stuff that we do regularly in SI?

For years I have shown people how energetic coherence and central equilibrium can dramatically enhance your effective power and increase your rooting ability. It goes much deeper than that too, bringing the body-mind into a state of Wholeness and enhancing Resonance with the Big Qi, while shifting awareness into the present moment in a big way.

It still blows people’s minds when they first experience that effortless power. They know that standing with feet together they can’t resist a push straight backwards…as long as they resist with their muscles. But when they point their index fingers and center over the balls of their feet something shifts. A whole-body energy connection that is utterly transformative.

What was different this time was to use this soft power to withstand pushes from multiple sources simultaneously. Some t’ai chi masters are able to demonstrate this at will. The challenge at TCA was to utilize the some of the ideas from finding You in a world of It to make that possible for even beginners to do.

And do it they did! What an empowering experience to tap into the power of meeting. In this video, Stephanie Morino (a slender t’ai chi teacher from Japan) gets practice meeting several people at once. The challenges are gentle at first, as she acclimates to pressures from many directions. Then suddenly it clicks for her and she wants more. Her internal power magnifies dramatically. What seemed impossible only minutes before now seems easy.

Meeting opens us to authentic living. We are no longer just pieces on the cosmic chessboard, but active participants and co-creators in the lived life.

I’d love to hear your thoughts and questions. If you were there, please add your own stories in Comments.

With Love and Light,
Rick