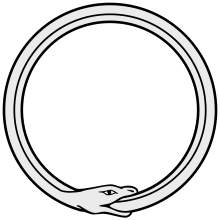 The ouroboros is a symbol dating back to ancient Egypt, and appears throughout the Western mystical traditions. A snake eating its tail represents self-reflexivity, the “eternal return.” and cyclicality. In Timmaeus, Plato writes:

I thought, “What a great symbol for the cycle of worry.”

Worry is to give in to anxiety and unease and let our minds dwell on troubles or difficulty. We worry because we imagine a future that we feel inadequate to deal with. We can’t fully embrace the moment we are in because the future might be bad. Sometimes there is good reason to fear what is coming, but worry often makes us less capable of dealing with it. Up to 80% of blood flow can leave the problem-solving frontal cortex and take up residence in your reptile brain. That dumbs you down right quick.

It becomes a chronic pattern. It feeds on itself and when it runs out of problems it looks for things to worry about. We feel something is “not right” so our nervous system lines up the usual suspects looking for what is “wrong.” We become hyper-vigilant, which triggers more stress hormones to deal with possible danger. This disturbs the biochemical balance in our bodies which makes us even more certain that “something is not right.” And the serpent is well into his lunch, feeding on its own waste.

How to interrupt this pattern? Well, first you need to put out any fires that are burning now. Move that gas can away from the stove. That is, handle what needs to be handled in the moment. Take note of your other causes for concern, then give yourself permission to NOT think about them for a while.

Worry is a non-coherent energy pattern. When energy in any system is harmonious and directed, it is coherent. And when coherent, it organizes the system, which then makes the energy even more coherent.

Worry is not that. It is confused, dissonant energy and has the effect of disrupting the system. To interrupt the ouroboros’ feeding frenzy, one must shift the underlying energy pattern. Because it’s not that next bite of your own tail that will lead to resolution. Y0u gotta get a different game.

As I describe in other articles and videos, and explain in great detail in TTWG, we can easily and quickly enhance energetic coherence by consciously pointing and reaching with the index fingers. It takes but a second or two and the energy starts to shift. Each time you do it, the coherence of the system gets stronger.

The ouroboros is still tempted to bite that delicious looking tail, but it becomes a little easier to take a pass. Eventually, it finds better things to do and better ways to them.

When our attention is freed from the cycle of worry, we open to new possibilities.