The Roots of Pointing 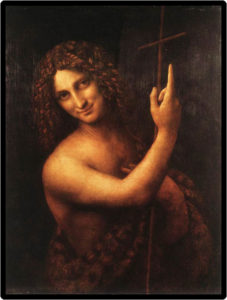 A question I often get when showing people how to enhance energetic coherence by pointing is, “Why is it the index finger?”

The short answer is, “Because it works.” I’ve tested using other fingers with hundreds of people and the index finger is the only one that does the job reliably.

The inspiration came from two sources. First, in taijiquan sword forms, the hand not holding the sword is often in a shape called “the secret sword hand.” The index and middle fingers are pointed forward and the ring and little fingers are curled under the thumb. 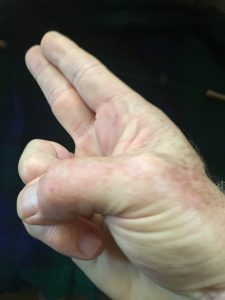 I dutifully did that for years, not knowing why, until one day I noticed that holding my left hand that way made my sword hand stronger. It completed an energetic circuit that enhanced the power of both arms. Further investigation showed that every posture in any taiji form is enhanced by consciously connecting both hands to form a continuous circuit. The business end is yang, and the backup is yin. The yang does the job while the yin grounds the energy.

The “secret sword hand”( at the very least) demanded that some consciousness be brought to the yin hand, and that helped to complete the circuit.

That was big. It is easy to demonstrate and test. And it shows that there is a lot more going on that muscular contraction.

Second, in taiji boxing class, Master Chen instructed us to strike with the knuckles of the index and middle fingers, while keeping the ring and little fingers relaxed. Try it. Tightening the ring and little fingers activates the brachialis and biceps muscles to flex the forearm. This produces drag on extension and slows down the punch. Master Chen emphasizes that the speed of the punch is what gives it its power. In this video, he shows remarkable hand speed undiminished by eight decades of punching.

His arms and fists are quite relaxed as he delivers each punch. In this hilarious video he punches while holding a banana in his fist.

While training for tournaments in the 1990s, I experimented and found that my effective power was enhanced even more by pointing with my index fingers. It integrated my body-mind in a way I found hard to believe. It also cleared my mind and enhanced my root. Something much bigger was going on, even if I didn’t have language for it. (That came years later.)

Check out my post, “The Paradox of Wardoff” to see one application of energetic coherence to a taijiquan form.

This new trick of mine was a powerful tool in competitions. I won a lot of matches that I wouldn’t have otherwise. It passed the test of pragmatism.

Beyond that, there was still the question of “Why the index finger?” It always seems to be the first among equals. There are more neural connections to the brain than in all the other fingers combined. From an early age, children use that digit to indicate their preferences and curiosities.

My good friend Ritu Kalra just sent me this fascinating article by linguistics professor, N. J. Enfield, “Pointing is a Prerequisite for Language.” It indicates that pointing with is a distinctly human activity. “There is little evidence of pointing occuring spontaneously between members of any species other than our own. It appears that only humans have the social-cognitive infrastructure needed to support the kind of cooperative and prosocial motivations that pointing gestures presuppose.” Pre-linguistic children use pointing gestures to communicate long before they can formulate sentences.

It is an evolutionary leap. Our cousins the great apes don’t do it. But they don’t talk much either, as far as we know. There seems to be a unique organization in the human body-mind that fosters language…and pointing. Enfield writes, “The essence of language is found in our capacity for the communion of minds through shared intentionality. At the center of it is the deceptively simple act of pointing, an act that must be mastered before language can be learned at all.”

This doesn’t exactly explain “Why the index finger?” but it does indicate that it goes deeper than our ability to formulate that question. We assume index finger when talking about pointing, even though a toe or an elbow will communicate direction.

Michaelangelo made it pretty unambiguous in “The Creation of Adam.”