Three Things We Learned in Class

We examined the “Turn and Strike with Fingers” move from Master Chen’s 60 Movements on Wednesday and isolated some universal principles.

So much of what we do gets put on automatic after a while and it isn’t until you shine a bright light on it that you become conscious of what is really going on. Oftentimes a pattern gets established in a half understood way, then decades later it has calcified into a rigid belief. So we test every movement, and every movement within the movement.

Here’s what we came up with this week:

1. Which is the “substantial” leg?

” At its simplest, the substantial leg is the one that is primarily carrying the load.”  It is the one that I depend on for my stability. The insubstantial leg is then free to step, kick, or sweep. In other words, it’s a real good idea to know which foot is supporting you at all times. (Of course, there are many levels of discrimination of xu and shi, and this is perhaps the grossest one. For a broader discussion of xu and shi, please see Chapter Three.) 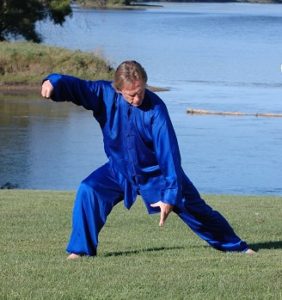 This may be a simple matter in some situations, of course. You can easily see which one has the load. In transitions, however, it may not be so clear.

When you withdraw to Push, say, when exactly does the weight shift from front leg to back?

Are you aware of that point? If not, if you just shift blindly, it is highly unlikely that you will maintain that whole-body energetic connection that elevates taiji beyond a gentle callisthenic to the liquid magic that it can be.

If you want to maintain your root and your whole-body energetic connection from movement to movement, you will delete “shifting” from your vocabulary. Why? It emphasizes the wrong thing. “Shift” says “move your center of gravity from your right leg to your left (or some such).” But it gives no information about how to do that. Most likely, you will do it like you have since you were a year old. That’s not going to cut it. It emphasizes the end condition (weight primarily in the left leg) over the important thing: rooted and connected.

Instead of just shifting, you want to establish your foundation from the ground up. Ball-Knee-Kua. In sequence. Feel the way the ball of the foot of the substantial leg contacts the ground. Then set the knee over the ball of the foot. Finally, align the kua (hip joint) so that you find the “sweet spot” that gives you maximum support as well as flexibility. That way, you trust the substantial leg and can let the rest of the body relax.

3. Meeting prior to the event.

One trick I learned in push hands competitions was to fully engage my opponent long before we stepped up to the line. Most people wait until the action starts before bringing their full attention to what is going on. They may never actually engage the person standing in front of them. Instead, they are responding to what they think is there. And that takes them out of the present. When I was fully prepared prior to the event, it often proved to be an insurmountable advantage. 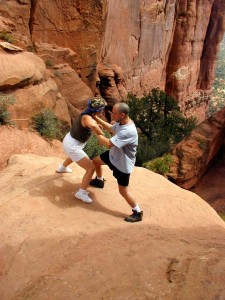 In class, we expanded last week’s push hands meeting exercise to include movement.

That is, when you stepped up to the line you were already fully present and ready to roll. The trick was to continue being fully present and engaged when you start to circle with your partner. It’s amazing how challenging it can be to add simple movement to the exercise.