“This is why alchemy exists,” the boy said. “So that everyone will search for his treasure, find it, and then want to be better than he was in his former life. Lead will play its role until the world has no further need for lead; and then lead will have to turn itself into gold.

That’s what alchemists do. They show that, when we strive to become better than we are, everything around us becomes better, too.”
― Paulo Coelho, The Alchemist

In the early 90s I visited Sedona, Arizona for the first time and was immediately smitten. Magic was everywhere…in the rocks…the people…in these mysterious vortexes. Even those unaccustomed to transrational/transpersonal consciousness were altered by the energy of the place. I met a fundamentalist Christian family from Ohio at the Airport Vortex and they told me, “We don’t know what’s going on, but it makes us feel like singing!”

I left there inspired to create a t’ai chi retreat that would be different from anything that was available at the time. The idea was to create a safe space for intelligent, creative teachers to share their knowledge in an egoless environment to promote understanding of the internal martial arts, energy healing, and love-based consciousness.

Tai Chi Alchemy was the name that kept coming up. Beyond the internal martial art of taijiquan, there is a broader meaning of Tai Ji (Tai Chi). It refers to absolute and infinite potentiality, and is the source of all existence. Tai Ji is the “mother of yin and yang.” Alchemy is a power or process that changes or transforms something in a mysterious or impressive way. In the internal arts we use consciousness to transform and integrate body-mind-spirit, as well as our relationships to each other. There is an implication in alchemy of combining disparate elements to bring into being something that resonates more authentically with the Soul of the World.

That was 1994. The first attempt was a huge disappointment to me. Not much alchemy happened. It was two years later that we tried again. Don Ethan Miller and I did all the teaching then, and it worked better.

Glimmers of alchemy could be found. Over the years TCA has gotten contributions from more and more sources, exploring martial arts, energy healing, sound, movement, shamanism, and meditation.

Practical transrational and transpersonal consciousness! To get beyond ordinary mechanistic-materialistic models we need predictable and practical techniques and language that enables us to discuss all this woo-woo stuff. That’s primarily why I wrote Taijiquan: Through the Western Gate. And that is what TCA is all about: bringing transrational/transpersonal awareness into our lives to live more richly and authentically.

Each year is different. I never know what will be shared going into it. So much depends on who is there and what they are interested in. I trust that having such intelligent, creative people present that cool stuff will emerge…particularly when the Sedona ju-ju kicks in. We begin by asking “What else is possible?” And open to the inspiration. Coelho writes, “Intuition is really a sudden immersion of the soul into the universal current of life.”

That is a whole lot easier when you have a whole bunch of open-hearted warriors of love to share it with.

One of the most dramatic examples of alchemy happened in ’06 when Susan Jordan and David Zimmerman showed us how to use our intention to soften the metal in forks so that we could twist them like pipe cleaners or coat hangers.

Last year, as Tommy led us in a shamanic ceremony there was a chorus of coyote howls and a meteor shower.

The magic can come while doing overtone chanting in the hot tub at midnight. Or while push hands with someone you just met.

The magic can also come in an intimate encounter with a tree. 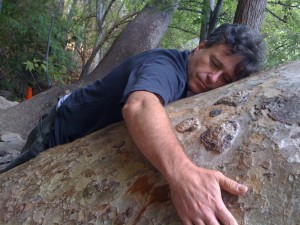 Tai Chi Alchemy is not just another day at the office or another seminar to learn something interesting. People come to TCA expecting peak experiences. They get them. Why?

Because when you meet someone or something with your whole being, you open to the infinite possibilities of an abundant universe. When a whole group joins you in meeting, you have allies in your quest.

If that sounds like your cup of tea, I hope you will join us in celebrating 20 years of alchemy, September 19-21.