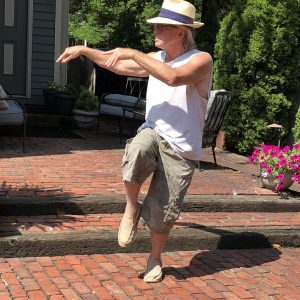 There is a secret source of taiji power that is buried in plain sight. You actually have two of them, standard issue for most humans, and you have most likely been unaware of the vast potential they hold.
Elbows.

“Elbows?! You gotta be kidding me!”

Correct use of your elbows unkinks the hose and unleashes a torrent of energy that has been dammed up in your shoulders. (You know, those shoulders that your teacher always told you to “relax.” Which you did, but the tension kept coming back. Yeah, those shoulders.)

There are eight “gates” in taijiquan (bamen): peng, lu, ji, an, cai, lie, zhou, and kao. They are usually translated as Ward Off, Roll Back, Press, Push, Pluck, Split, Elbow, and Shoulder, respectively. It is said that every taijiquan posture/movement is some expression or combination of these eight gates.

In addition to being specific martial techniques, these eight gates are also considered “energies” or jins. Today I would like to discuss perhaps the most elusive of the eight: zhou (elbow; pronounced “joe”). And not as a martial application, but as a jin.

There is a fundamental distinction in taijiquan between the force generated by muscular contraction, li, and the power that is sourced in jin:

Jin: (Chin). Power that results from the integrated use of body and consciousness; physical expression of qi that is directed by consciousness and based in whole-body energetic connection. Contrast to li.

It’s a fine distinction, and one you can’t really make by just reading about it. You have to feel it. Most people have been primarily using li their whole lives so this idea of there being a more effective way of generating power, a soft power, can sound like hokum. But it is something that can be easily demonstrated. (Check out my earlier blogs and YouTube videos for more information. Just punch in “jin” into the keyword search and stand back.)

Jin is what makes taijiquan special. You can still get a lot of benefit from taiji if done only superficially, as a form of gentle exercise, but why stop there? This incredible journey has just begun to get interesting.

Jin is where the body-mind connection jumps to a whole new level and shen (spirit) enters the conversation. And that is the path to superconsciousness.

And the eight bamen are the signature jins of taijiquan.

here is much written about the first six gates (peng, lu, ji, an, cai, lie) but not much about zhou and kao. We will leave the first six for another conversation, and since zhou (elbow) is the gate to opening the shoulder gate, let’s start there.

Let me offer the disclaimer that I do not speak or read Chinese, so I am not offering these thoughts as the “correct” interpretation of the classics. They are my way of interpreting actual observables in language that is inspired by my decades of studies, and sometimes the classics are helpful in describing those phenomena. I recognize that I am not the first one to ever observe these phenomena, even if they are not always explicitly described in the literature. I believe that MOST of the really cool stuff was transmitted from master to student and jealously guarded. It is up to us latecomers to the party to sort the wheat from the chaff.

Zhou is usually translated as “elbowing” or “elbow stroke.” That is tradition, even if it is not explicit in the term. That interpretation describes an action, a martial technique: striking an opponent with the elbow. This always confused me: “What’s so ‘internal’ about smashing someone with your elbow? That’s part of most martial arts and/or self-defense practices.”

This is different from the descriptions of other gates as “energies.” For instance, peng (ward off) refers to an upward-outward energy expansion, lu (rollback) energy can be thought of as inward or downward, and ji (press) is the coming together of two forces. An (mysteriously called “push”) is a down and then forward and outward energy.

You usually learn peng-lu-ji-an first as external movements, forms, and then, as your practice deepens, you learn the energies that these movements represent and train. I teach it differently. My students study the energies along with the forms, right from the start. You learn them as jins, and then those jins can be applied in a wide variety of forms. For example, peng jin is not restricted to the “Ward Off” posture; it can be felt in any shape where an “up and out expanding” energy would be useful.

But I was confused by zhou for a long time. There is such a scarcity of information about it. And the traditional rendering sounds pretty mechanical. Then one day I noticed the jins that I was already producing with my elbow and wondered, “Could this be what is meant by zhou?”

Maybe it is. The internal power that is produced this way is truly remarkable. And it fits the description from the traditional “Song of the Eight Gates” a bit better than simply “strike with elbow”:

“What is the meaning of Elbowing Energy?  The function is in the Five Activities: advancing, withdrawing, looking-left, gazing right, and fixed rooting.  The yin and yang are distinguished according to the upper and lower, just like Pulling.  The substantial and insubstantial are to be clearly discriminated.  If its motion is connected and unbroken, nothing can oppose its strength.  The chopping of the fist is extremely fierce.  After thoroughly understanding the Six Energies (adhering, sticking, neutralizing, seizing, enticing, and issuing), the functional use is unlimited.”
–   Stuart Alve Olson, T’ai Chi According to the I Ching, 2001, p. 74

From this translation, zhou seems to integrate a lot of things: yin/yang, substantial/insubstantial, the “Five Activities,” and the “Six Energies.” If its motion is connected and unbroken, nothing can oppose its strength…the functional use is unlimited.

It sounds a lot bigger to me than whacking someone with your elbow. A LOT.

So, what am talking about here? And why is it “buried in plain sight”?

When we think of “strike with elbow,” are we initiating from the elbow? No. Elbow is the part that is doing the striking, not the energy that is driving it. My experience is that most people initiate with the shoulder in order to strike with an elbow. If are well-trained, it is a product of a whole-body energetic connection, but that’s still not really an elbow “jin,” is it?

Jin doesn’t come from muscular contraction, at least primarily. That is, there will always be muscles contracting somewhere in your body when you are moving. But that’s not what produces jin, and muscular tension often gets in the way. Jin is energy that is directed by consciousness and expressed through the body, primarily the connective tissue system (sinews). Jin is directed, funneled, channeled to do something. It is selective, compartmentalized. It doesn’t just happen. It is produced by intention.
Jin draws on the wholeness of body-mind-spirit integration then uses that to do something.

To access elbow jin, you must first be in a state of enhanced wholeness (coherence). (That’s true of any jin.) Like a garden hose. If the hose is not full of water, then it can’t do its job properly. Central equilibrium and energetic coherence help to fill up the hose. You can’t direct energy if there isn’t enough there to work with.

When you are pluhttp://www.taichialchemy.com/opening-the-jade-pillow-gate-part-three-professor-cheng-man-chings-insightsgged into the Big Qi, “Nature Qi”, you can access elbow jin by pointing and reaching and FEELING your elbows. I know, it’s too simple. That’s what I mean by “buried in plain sight.” We’ve been using our elbows our whole lives, but largely at a preconscious level. That is, we are just not conscious of what we are doing with them. They are more or less activated automatically as part of arm movement.

To get started, you can reach out and touch something with your elbow. Do that now. Actually FEEL an object with your elbow. Something subtle, yet profound and powerful, happens when you connect the internal dots. Almost magical.

If its motion is connected and unbroken, nothing can oppose its strength…the functional use is unlimited.

If you are attuned to subtle energies, you may notice an immediate shift in your state of being. The mind clears; it enters the “gap between thoughts.” Body-mind-spirit integration makes a quantum shift into a different state of being. You feel very PRESENT. Your energy becomes even fuller, more coherent.

But some people may not be able to make these distinctions. Their prior experience makes such a thing unrecognizable. Many many people can’t really “feel” with their elbow. Instead, they “think about” feeling, creating a subject-object mental separation that disrupts the coherence.

This test helps them to make that distinction in their own minds.

So, how do we make the jump?

I find it helpful to do a before/after test to see if the connection has been made. Something that can be observed as well as experienced subjectively. It should be obvious enough to make the work of transforming the nervous system worthwhile, as well as fun.

Once you become familiar with feeling something external (wall, door, chair, another person), then you shift to feeling your elbow internally. You use your interception to locate the elbow in your nervous system’s map of your body. The information is all there, just sleeping.

In the video below, I start by testing an external feeling, something outside the body 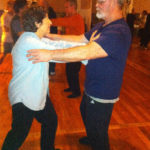 Reaching and feeling elbows enhances the power of any posture

. In the “before,” I test the power of Maria’s muscles by pushing on her forearm in a way that is difficult for anyone to resist using muscular contraction: across her body. The arm collapses easily, as expected. She is easily uprooted.

Then, in the “after,” Maria reaches out and touches the wall with her elbow. This is not done mechanically. She reaches her elbow out to sense the feeling of it. In doing so, she opens the shoulder joint, extending the arm rather than just pushing it out. Now I push on her other arm with many times the amount of force.

In the second demonstration, she tries it by feeling her other elbow, the one not touching the wall. She moves away from the wall and reaches her active elbow into my hand. This is harder to do, but with practice it becomes very effective. Feeling requires shifting to a different part of the brain than thinking. Same result though: rooted and powerful.

In the third demonstation, she reaches out with her elbow as if to execute an elbow strike. When driven by the shoulder, this is easy to collapse and uproot (as seen in the “before”). But if she FEELS my hand with her elbow, she activates her zhou jin and is rooted and powerful.

If its motion is connected and unbroken, nothing can oppose its strength…the functional use is unlimited.

Of course, all this takes training. You are not just learning a new trick. This is a whole new way of being. And with it comes presence, confidence, peace, clarity, and effortless power.
The power of the elbow gate! “The functional use is unlimited.”
In the next post, I will show how elbow jin can be used in just about every posture.