I hope you had a chance to check out Unlocking the Elbow Gate, Part 1. If not, please read that now. This post will build on what we covered there. 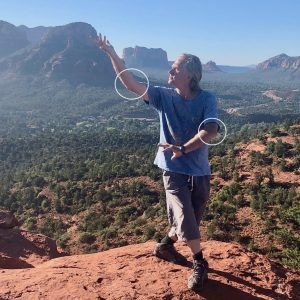 I feel a little like Nicolas Cage discovering some hidden map or document hidden in plain sight. I have been using “elbow jin” for decades with considerable effectiveness, but correlating that to a misunderstood passage from the Taiji Classics is a much bigger deal. Since I don’t speak or read Chinese, I am at the mercy of those translators who have gone before. What I am offering here are my insights from forty years of personal research (for whatever that is worth).

Our story so far:

For decades I have found that feeling and reaching out with my elbows makes whatever I am doing work better. Not just taijiquan…everything: sports, meditation, walking, dancing…whatever.

Let’s look at tennis. Notice how Dominic Thiem emphasizes his elbow motion to produce the most powerful forehand in men’s tennis. His backswing is led by his elbow. While not big guy, he totally crushes the shot. Hitting a 100 mph forehand is not done by arm muscles. It requires that the whole body work as a unit.

It goes far beyond just hitting fuzzy yellow balls for millions of dollars, though. It can transform everything. For me, emphasizing the elbow “unkinks the hose” in my shoulders, creates a powerful whole-body energetic connection, and creates access to a mental/spiritual peace and clarity. I have shared this with my students, and they have all been excited by the dramatic changes it brings.

I called it “elbow jin.” Recently, I looked again at the Taijiquan Classics to see if I could find a correlation there. There is precious little written, but one treatise leaped out at me like never before, “Song of the Eight Gates.” I took a little time to unravel the arcane language, and I think that has been fruitful.

There are eight signature “gates” (sometimes referred to as “energies”) in taijiquan (bamen): peng, lu, ji, an, cai, lie, zhou, and kao. They are usually translated as Ward Off, Roll Back, Press, Push, Pluck, Split, Elbow, and Shoulder, respectively. It is said that every taijiquan posture/movement is some expression or combination of these eight gates. These gates are unique to taijiquan.

As discussed in Part 1, zhou (elbow) is traditionally expressed as “elbow strike.” Little else is said about it, except in the traditional, “Song of the Eight Gates.” The description there hints at something quite profound, and much more than just hitting someone with an elbow. And jin is much more than just body motion and physical effort:

Through experience of the touch one can gradually comprehend and understand jin.
Through understanding jin one can reach divine-like clarity.
Wang Zongyue, Taijiquan Lun

“Through understanding jin one can reach divine-clarity.” Pretty bold words!

But I think it’s not an overstatement. It is through jin that we can manifest what Cheng Man-Ch’ing called “spiritual force.” It is the “soft power” of taijiquan.

We practice the Ward Off posture to remind us of the jin that animates it. If Ward Off is done using crude muscular force (li), it is next to worthless as a martial technique. The muscular connections are too weak to do anything significant. When animated by peng jin, however, it displays the supple power that is coveted by taijiquan players. More important, peng jin can be used in countless ways and is not restricted to the Ward Off posture. (See “The Paradox of Ward Off”)

Elbow jin is even bigger, I think. It seems to amplify the power of any other jin. This is hinted at in the “Song of the Eight Gates” in the section called “The Song of Zhou.” (These “songs” were transmitted orally and memorized by students.)

I’d like to compare two translations of this text. The Stuart Alve Olsen one I offered in Unlocking the Elbow Gate, Part 1..

“What is the meaning of Elbowing Energy?  The function is in the Five Activities: advancing, withdrawing, looking-left, gazing right, and fixed rooting.  The yin and yang are distinguished according to the upper and lower, just like Pulling.  The substantial and insubstantial are to be clearly discriminated.  If its motion is connected and unbroken, nothing can oppose its strength.  The chopping of the fist is extremely fierce.  After thoroughly understanding the Six Energies (adhering, sticking, neutralizing, seizing, enticing, and issuing), the functional use is unlimited.”
–   Stuart Alve Olson, T’ai Chi According to the I Ching, 2001, p. 74

There is another translation that I would like to share, researched by Lee M. Scheele, and attributed to T’an Meng-hsien:
The Song of Chou (Zhou)
What is the meaning of Chou energy?
Its method relates to the Five Elements.
Yin and Yang are divided above and below.
Insubstantiality and substantiality must be clearly distinguished.
Joined in unbroken continuity,
the opponent cannot resist the posture.
Its explosive pounding is especially fearsome.
When one has mastered the six kinds of energy,
the applications become unlimited.

Both imply that there is something really BIG going on with zhou, but there are some subtle differences between these two. Let’s compare:

The first translation says, “the function is in the Five Activities (advancing, withdrawing, looking-left, gazing right, and fixed rooting).” The second one says, “It’s method relates to the Five Elements.” The Five Elements usually refers to the Wuxing: Metal, Wood, Water, Fire, and Earth.

One talks about something you DO (Activities), and the other refers to the stages of transformation inherent in Nature (the Five Elements, Wuxing).

However, there is a correlation between these two interpretations. The Wuxing relates to the Five Activities (the basic stances, or motions of the form): Advance (Metal), Retreat (Wood), Look Left (Water), Look Right (Fire) and Central equilibrium (Earth). In addition to this correlation, each of the Five Elements has its own distinct “feel.” For example, “Earth” energy has an expansive, circular, centrifugal feel. By contrast, “Wood” qi is expansive, linear, and directional (like a young tree pushing upwards toward the sun).

[The Five Elements inform taijiquan, but are rarely emphasized. They are addressed directly in xingyiquan, another internal martial art. The primary focus of taijiquan is yin-yang.)

Both translations emphasize differentiating Yin and Yang (“upper/lower,”” above/below,” respectively), as well as substantial (shi) and insubstantial (xu). Both agree that the effect of the whole-body coherence generated by this jin cannot be resisted.

Both translations finish by saying something about the “Six Energies.”

“After thoroughly understanding the Six Energies (adhering, sticking, neutralizing, seizing, enticing, and issuing), the functional use is unlimited.” (Olsen)

“When one has mastered the six kinds of energy,
the applications become unlimited.” Scheele

Olsen describes these “six energies” as something you do: adhering, sticking, neutralizing, etc.
Scheele says “six kinds of energy.”

There is some ambiguity here. Olsen’s “Six Energies” seem to come out of nowhere. Those six actions are definitely part of the taiji lexicon, but seem out of place here. Scheele doesn’t say what the six energies are. I’m more inclined to think that what is being referred to here are the six “energies” (gates) that were already being talked about: peng, lu, ji, an, can, and lie.

Either way, both of these statements imply that zhou (elbow) is not just a stand-alone martial application (elbow-strike). And its applications are unlimited. Most likely, it is a jin that amplifies the previous six energies (gates): peng, lu, ji, an, cai, and lie, but is not limited to that. “Unlimited” is a big jump from “elbow-strike.”

I’m sure there are other translations of “The Song of Zhou.” If anyone reading this has a reliable one, please send it along. My research on this has just begun, but I thought I would share my results as I progress.

As I said above, I have been using elbow jin for decades quite effectively. I have shared it with my students, but only recently with this much emphasis. In Part 1, I gave a hint of its power and also how to activate it by FEELING the elbow from “inside” your body. That is, you bring conscious awareness to the raw sensation of the sensory neural network. (For further information on “doing” vs. “feeling,” please see “Feel First, Then Do: Opening the Eye of Flesh.”)

Reaching and feeling the elbow, as a way to access effortless power, was something I came upon as a result of numerous shoulder injuries from various sports. Like most humans, I initiated arm motion from my shoulders. I had learned from  coaches and doctors and books that the shoulder muscles were powerful and that they should initiate the motion. The pattern was established in my infancy, and reinforced through the years. It seemed “natural.”

But is it? Or is it just habitual?  If we look at the arm as a lever and the fulcrum is at the shoulder, you don’t have to be Archimedes to see that the mechanical advantage of that particular relationship really sucks for most people. And chances are, if you are one of the few people whose muscles are sooo strong that you can overcome that bad leverage, then the overdeveloped muscle tissue is probably a major hindrance to other things. Taijiquan emphasizes the efficient use of what you have, not exaggerated muscular development.

Shouder tension is pretty common among adult humans. (You may have some experience yourself.) Muscles are in conflict with each other. They get confused about which should contract, so everyone does. The qi gets blocked and the shoulders get sore. We have a massive “kink in the hose.” And that affects the whole arm. When the qi gets blocked, then we are back to using gross muscle power. And the shoulder muscles just aren’t very strong.

When we initiate muscular contraction from the shoulder and try to move something heavy with it, we soon find out that those muscles are too weak to do the job. That’s when injuries occur. It happened to me in fast-pitch softball. It happened in construction. And it happened in push hands when I was first learning. I hadn’t yet discovered how to predictably and immediately access jin yet, so I used what had always been my go-to in the past:  physical strength. And since I was an enthusiastic push hands player, injuries resulted. Months would pass where it hurt excruciatingly to lift my arm at all. (Please see this article written for Tai Chi Magazine, Summer 2001: Protection of Joints and Connective Tissue in Taijiquan.) I had to learn the hard way. And I was a slow learner.

[What is sometimes referred to as “frozen shoulder” is often the result of the muscles in that area being so overwhelmed by misuse that they all contract simultaneously and lock up. I have done a simple release on many people who were scheduled for surgery unnecessarily.]

Something happens when we FEEL and reach with the elbows before initiating arm motion: we unkink the hose. Shoulder tension disappears (for the moment, at least). Energy flow is no longer dammed up in the shoulders. It flows unbroken from feet to fingers. Tensegrity in the connective tissue system is taken to a new level and energy becomes even more coherent.

In Part 3 of this series, we will discuss how to bring elbow jin into every part of a taiji form.