“Unlocking the Elbow Gate,” Part 1 and Part 2, were written to bring attention to the most underrated of the Eight Bamen (gates, or energies) of taijiquan. The Chinese name is zhou (pronounced “joe,” with the “j” sound having a little “ch” bite to it). Traditionally described as “strike with elbow,” I have tried to show that zhou’s character runs much deeper. Using the classic, “Song of the Eight Gates,” it appears that zhou is much more than just a martial maneuver or technique. It is one of the eight primary energies of taijiquan.

Zhou has been largely ignored. It is the Tom Brady of jins. Brady is a quarterback that was passed over by every team in the NFL, over and over, but then went on to lead his team to multiple championships and be recognized as one of the best to ever play. Like Brady, zhou makes the whole team play better. The Song of the Eight Gates proclaims, “If its motion is connected and unbroken, nothing can oppose its strength…it’s functional use is unlimited.”

I have been exploring elbow jin for a long time, but only recently have I seen the correlation to the zhou spoken of in the classics. Like so many things, I stumbled on the jin because it works in push hands, my empirical testing ground for taijiquan jins. At its core, push hands develops jin, internal power. You learn to differentiate jin from li (crude muscular force). Learning to use jin opens one door to spiritual awakening:

Through experience of the touch one can gradually comprehend and understand jin.
Through understanding jin one can reach divine-like clarity.            Wang Zongyue, Taijiquan Lun

I believe that spiritual awakening, that “divine-like clarity,” comes through body-mind-spirit integration. Wholeness. Jin is a physical expression of that integration. It is accessed through presence and wholeness. By opening the Three Eyes: Eye of Flesh, Eye of Mind, Eye of Spirit. 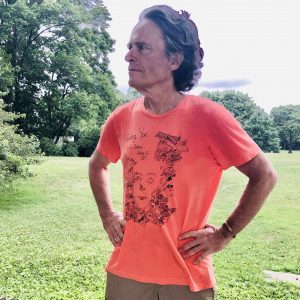 One iconic example of elbow jin can be found in the “Superman posture.” You know, hands on hips, elbows reaching out, standing tall and proud. It’s big and bold and commanding. Harvard professor Amy Cuddy says that adopting that posture, or any other “power posture,” for just 2 minutes will bring about significant changes in your endocrine system. Testosterone goes up; cortisol (a stress hormone, see Coherence and Cortisol in the Time of Covid-19) goes down.
Testosterone is important for both males and females. It improves muscle tone and strength and increases bone density. Cortisol suppresses the immune system and opens the door to many health problems.

Two minutes of a “power posture” also helps you to feel more powerful, more confident, more self-assured, more present. Cuddy says: “Presence stems from believing in and trusting yourself — your real, honest feelings, values, and abilities. That’s important, because if you don’t trust yourself, how can others trust you?”

(I consider that presence runs much deeper than just “believing in and trusting yourself,” but those qualities can be expressions of presence. Years ago I wrote about presence, “Before we can engage a person or thing freely and consciously, an important choice must be made. It is the decision to be Present, to consciously assume a position in space and time. That means to bring your attention to the moment you are actually in, not on the story of some other time, past or future. It is not enough to be here in body only, our attention elsewhere. Nor is it enough to just be present as ‘observer’ or ‘witness’, detached from self and other. We must encounter with our whole being. It means embracing What-Is, and What-Is includes the being that is me. And I can only engage to the degree that I am willing to Be.” See “The Ins and Outs of Presence.“)

”
Cuddy’s research shows that the simple act of assuming a physical posture can have profound, immediate effects on body and mind. As a martial arts technique, however, the “Superman posture” is pretty limited. That’s where zhou comes in. You don’t have to go “full-Superman” to reap the benefits of the power posture. Instead, you can quietly and softly reach with your elbow to establish the energetic connection. Properly applied, it can immediately amplify the effective power of any technique, bring calmness and mental clarity, and expand your Presence. It changes your state of being and expands your energy field.

Zhou and Peng Jins
Peng jin is another of the Eight Bamen (Gates) of taijiquan, and is usually mentioned first. Peng jin is practiced in the Ward Off posture, but can be found in many other movements. It is often described as an expansive, “up and out” type of energy. Like a geyser. Zhou amplifies the power of peng, something that can be easily demonstrated. (See demonstration with Maria below.)

Let’s look at Ward Off Left. For decades, I practiced my Ward Off the way I saw everyone else doing it. I brought my left arm into position by initiating movement from the shoulder. The arm came up as a unit and curved in front of my chest. The emphasis was always on “relaxation.” But when I submitted it to testing in the laboratory of push hands, however, I found it lacking. Doing it that way is a muscular action, not jin. As a pure muscular motion (li), it kinked the hose in my shoulder and blocked the flow of energy. My muscles weren’t powerful enough to Ward Off anything, and the leverage (fulcrum at the shoulder joint) was lousy. When I tried to do it against a large human, injuries resulted. 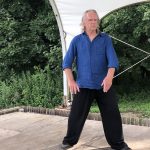 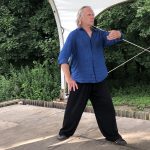 That changes when I add a little zhou to the movement. I set my elbow before raising the hand. The fulcrum shifts from the shoulder to the elbow, allowing the forearm to move into position easily and powerfully. 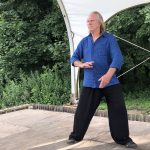 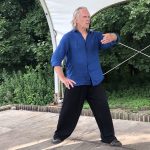 The instant I reach out my elbow and FEEL it, my body-mind undergoes a shift. More integrated, present, powerful.

A simple adjustment, but a huge payout. To the untrained eye, the postures may look identical. They are not. There is a sequence here. Only after the elbow is set do I bring my hand up, pivoting my forearm at the elbow. What do I mean by SET? Located and temporarily fixed in relation to the rest of the body. If the elbow continues to move, then the pivot point shifts back to the shoulder, breaking the energetic connection.

Maria demonstrates the power of zhou: 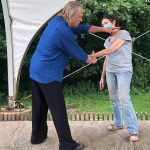 When initiating from the shoulder, one finger easily stops the arm and collapses the Ward Off. The shoulder muscles are not powerful enough to handle even a little resistance.

With elbow jin, however, I am uprooted. Maria’s peng jin is amplified and her Ward Off becomes quite effective. 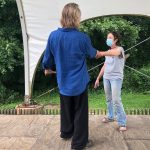 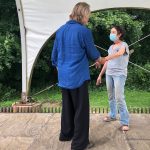 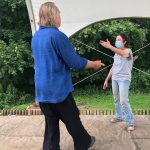 Elbow Jin in Ward Off
Emphasizing zhou immediately amplifies your peng jin in a Ward Off posture. Rather than lift your arm from the shoulder, try to first establish your elbow position, then pivot from the elbow. The effect is immediate. Your shoulder muscles relax as you use the tensegrity of your connective tissue system.  This creates the tensile strength that allows for soft power.
Every movement in a taiji form is improved by activating zhou. But don’t stop there.

Do It All Day!

A collapsed body collapses your energy field! But this one change can effectively alter your energy, your appearance, and your effectiveness.

Elbow jin instantly transforms whatever you are doing into a “power posture.” And that provides an opportunity to access presence, confidence, calmness, and clarity.

When sitting at your computer, reach out a little with your elbows and notice how alert you feel.

Do it while doing the dishes, walking down the street, dancing.

Elbow jin won’t cure all your ills, but it can sure make life more interesting.