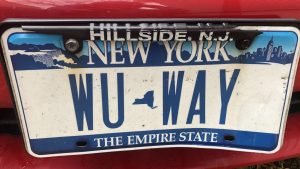 Wikipedia:
Wu wei (Chinese: 無爲; pinyin: wú wéi) is a concept literally meaning “inexertion”, “inaction”, or “effortless action”.[1][2] Wu wei emerged in the Spring and Autumn period, and from Confucianism, to become an important concept in Chinese statecraft and Taoism, and was most commonly used to refer to an ideal form of government,[3] including the behavior of the emperor.

Describing a state of unconflicting personal harmony, free-flowing spontaneity and savoir-faire, it generally also more properly denotes a state of spirit or mind, and in Confucianism accords with conventional morality.  Sinologist Jean François Billeterdescribes it as a “state of perfect knowledge of the reality of the situation, perfect efficaciousness and the realization of a perfect economy of energy.” (Italics mine.)

Wu means “no” or “not.” Wei is “doing” or “effort.”  Literally, wu wei is “not-do” or “effortless action,” and is a quality highly regarded in both Confucianism and Daoism. It is sometimes expressed as “go with the flow,” but that implies a passivity that oversimplifies the power of wu wei. Something mysterious goes on that defies our conventional understanding.

The second chapter of the Dao De Jing reads:

Therefore the sage manages without action,
Carries out teaching without speech.
Ten thousand things arise and he does not initiate them,
They come to be and he claims no possession of them,
He works without holding on,
Accomplishes without claiming merit.
Because he does not claim merit,
His merit does not go away.
Trans. Ellen M. Chen

The Daoist sage has deliberately withdrawn from the affairs of the world, something I am not interested in doing. I prefer full participation in the human experience. But there is a powerful principle at work with wu wei, one that can possibly transform every aspect of your life.

How do we bring this into martial arts, into life? First, we have to acknowledge that “doing” is part of the process. But all doing is not the same. Wei wu wei doubles down on the “doing.”  It clarifies that there is indeed some action happening. We are not just being passively swept along by the currents of life. But the wu reminds us that something special is going on.

It’s not just the automatic Do-Do-Do that occupies so much of our day. There is a “nothing,” a wu, that interrupts all that “something” of doing. It is a moment of mindfulness that interrupts the preconscious action.

It is “doing based in absolute non-doing.” I think it is the same idea that many ascribe to wu wei, but stated less ambiguously as wei wu wei.

My students often complain when they execute a jin correctly and are surprised by the effortless power they are able to generate, “But I didn’t do anything!” It certainly seems like that. A small woman uproots a large man and it defies the powerlessness she has felt her whole life. She thinks, “How can this be? He’s so much bigger and stronger than me?”

And she is not alone. The feedback that most of us have gotten through our lives is derived from how much effort it takes to overcome resistance. We push against things, and how much they push back gives us information about what it is we’re dealing with. And not just physically. Emotionally. Mentally. Socially. We learn about our strengths and weaknesses by interacting with the world and noticing where we encounter resistance…and how much. And that gives us a picture of what our capabilities are.

And then something comes along and shocks us into realizing that maybe we’re selling ourselves short. Maybe we’re capable of much more. There is an old taiji joke, “If it don’t look fake, it ain’t real taiji.”

It’s not that we “didn’t do anything.” It just didn’t feel like it. That something was done is observable. Bodies acted in seemingly innocuous ways with surprising results. And done again the same way will yield the same results.

I believe that the key can be found in Wei Wu Wei. The “doing” is interrupted by that little wu, the moment of mindfulness that brings conscious awareness to a preconscious activity. (See my last blog, “Feel First, Then Do“)

I have written quite a bit in the past year about the how evolution has heavily rewarded the preconscious motor response. This is what causes us to tense up while talking, driving, typing…even sleeping. It signals the sympathetic nervous system to crank up heart rate, pull resources from internal organs for possible action, and activate stress hormones.

by contracting our muscles. That is what I mean by motor response. The central nervous system activates muscular contraction via motor neurons. And while this is certainly effective in some some circumstances, there are a lot of times when it just gets in the way. Who needs a tight neck and shoulders on a long drive, anyway? But since the most of that muscular tension is happening at a preconscious level, we are not aware of it until it registers as pain.

Shifting from crude muscular force (li) to the effortless power of jin requires a moment of wu, a pause where you let go of your automatic motor response before you leap into action. Taijiquan tradition says (and I paraphrase), “My opponent initiates, but I get there first.” “Mobilization first, then movement.” Cheng Man-ch’ing said, “Force without force is spiritual force…or what also may be called miraculous speed.”

Making the jump from li to jin is actually very simple. But that doesn’t mean it’s easy. You are bucking millions of years of evolution and the weight of lots of “everybody knows” assumptions. It takes time to acclimate to the mental quietude in the midst of action. It requires gongfu, diligent practice over time, to rewire the nervous system to accommodate this new operating system, one based on wei wu wei.

If it only meant that your martial arts would move to a very high level, many of us would feel okay about letting it go. But it’s much more. It touches every part of your life. And each time you bring mindfulness to your physicality, you awaken from a trance that swallows you whole and leaves you wandering through the hall of mirrors of your thinking mind. You shift from the narrow limits of rationality into superconsciousness. You won’t stay there, but once you are familiar the process, it gets easier to get there and you stay longer in a calm, clear-minded state.

And every moment awake provides the opportunity to engage life exactly as it is…INFINITE.

“Find the motion in stillness. Find the stillness in motion.”