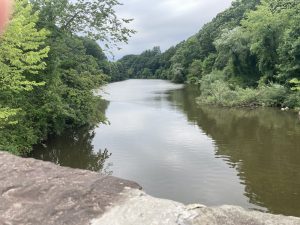 When your body is not aligned [形不正],
The inner power will not come.
When you are not tranquil within [中不靜],
Your mind will not be well ordered.
Align your body, assist the inner power [正形攝德],
Then it will gradually come on its own.

(From the Nei Ye, “Inner Training,” possibly the oldest Chinese text of Daoist mystical practices. It was written around 350-300 BC, likely before the Dao De Jing and the Zhuangzi.  Quoted in Wikipedia.

The terms Wu Wei and Wei Wu Wei often come up when nibbling at the edges of Chinese philosophy. They can also be useful in Taijiquan practice. Oftentimes, however, they are conflated and their meanings are obscured. I believe it is useful to differentiate between them to fully understand the internal power of Taijiquan.

Wu Wei has often been discussed in the context of an ideal form of government or personal behavior, characterized by inaction or effortless action. Some think of it as “go with the flow,” or passivity, “Let it Be.” While this is not exactly wrong,  I don’t think it gives a useful explanation. It is easy to get lost in fuzzy abstractions and lose the essence of this concept and the related, Wei Wu Wei. In this post, I would like to examine Wu Wei and Wei Wu Wei in the context of something that can be experienced, Taijiquan, where it has significant practical application.

Wu Wei is literally “not do.” Wu has many different meanings, depending on the pronunciation and context, but here it is used as a negative: not, no, nothing, nothingness, absence, etc. Wei, in this context, means “do.”

Wei Wu Wei could be understood as “Doing, based in Non-Doing.” That’s closer, but it’s still kind of fuzzy. “Non-doing” could include such things as indolence, lethargy, and apathy, and that’s not what we are going for at all. Wu Wei goes beyond mere passivity. It includes a state of awareness imbued with potentiality. I like to think of it as the state of Aware Being that gives rise to Conscious Doing. That is, your awareness is filled with calm, centered Beingness. It is the Stillness that gives birth to Motion. (See “Stillness in Taijiquan”)

When you can be properly aligned and can be still
Then, you can be settled.
With a settled heart/mind in your center,
Your ears and eyes are acute and clear,
Your four limbs are hard and strong,
You are able to become a dwelling for essence.
This essence –
Is essence of Qi!

The Gap Between Thoughts

I include the above passages from the Nei Ye because the language used resonates with my experience of Wu Wei and Wei Wu Wei. When you are “properly aligned and can be still,” there is a mental shift from Doing to Being. In that conscious, aligned stillness, you shift your awareness from rational thinking to a state of Superconsciousness: body-mind-spirit integration. “Your ears and eyes are acute and clear, Your four limbs are hard and strong.” You access heightened awareness, effortless power, and bones that feel like a “steel bar wrapped in cotton.” Superconsciousness can then be maintained and expanded as you move consciously. This “Being that precedes Doing” accesses the internal power (Jin) that characterizes Taiji.

Align your body, assist the inner power [正形攝德],
Then it will gradually come on its own.

Easier said than done. Our nervous systems are not designed to go to Stillness easily. It is an acquired taste. Evolution has hardwired our minds to swim in a stream of consciousness, ever alert for present dangers, ruminating over past missteps, or guessing about an uncertain future. Whenever the brain is not engaged in some task, the Default Mode Network is churning away with an incessant barrage of mental noise. The Chinese concept of “mind-monkey” describes this restless, agitated mental state. It contrasts with the “will-horse,” the Yi,

In Chinese philosophy, the “mind-monkey” contrasts with the “will-horse.” While the mind-monkey is all over the place, seemingly uncontrolled and uncontrollable, the will-horse is calm, powerful, and directed. It is the “wisdom mind,” the Yi. which is calmly centered and directed. The Yi is a state that allows one to DO without losing one’s coherence and integration. While I appreciate the colorful imagery conjured by mind-monkey and will-horse, I find it more useful to use the term Superconscious (Body-Mind-Spirit Integration). This allows us to integrate the insubstantiality of mind with the substantiality of the brain and nervous system. They are two aspects of the same thing: human awareness.

Our thoughts may appear to come in a continuous stream, one after another, but that is not really accurate. Each thought that comes to mind has a beginning, a middle, and an end. An impulse arises in the nervous system, gets the attention of the conscious mind, and then goes away. And before and after each thought there is a space…a no-thought. If you are already entranced by the next thought that appears, you may not notice this space. But it was there, however briefly.

My 40-plus years of meditation, qigong, energy healing, and Chinese internal martial arts have shown me that HOW you practice is more important than WHAT you practice, or even HOW MUCH. I am constantly researching more efficient and practical ways to shift states of awareness and of being, even in the most challenging circumstances.

In any meditation we learn to shift from the default mode network (DMN) in the brain, the part that is busily updating our personal narrative moment-by-moment. In many ways, the DMN correlates to the “mind-monkey”: perseverating about the past, worried about the future, nattering about others, criticizing ourselves–static on the radio. It is called “default” because it is what we tend to revert to whenever we are not consciously engaged in an activity. When we shift from the DMN, it  becomes much easier to find the gap between thoughts, to access the “non-conceptual wisdom,” that Milarepa spoke of.

So, how do we shift from the hamster wheel of continuous thinking to bring awareness into the present moment? How do we operate the brain/nervous system instead of it controlling us? How do we get the mind-monkey on a leash?

This is discussed in some detail in another earlier post, but it can be summarized by FEEL FIRST. THEN DO. (See “Feel First. Then Do.”) Sensing and Doing are handled by separate parts of the nervous system, the sensory neural network and motor neural network respectively, but they are usually lumped together and largely unconscious. But when we bring conscious awareness to the sensory information, particularly the FEELING sense, a shift happens in the brain. We awaken from chatter of the thinking mind to a Superconscious state characterized by KNOWING WITHOUT THINKING. It is in that moment that we become very Present and integrated. We can then access abilities, awareness, and knowledge that is hard to muster when stuck in our heads.

This is a moment of Wu Wei–Not Do. Attention is on Being, and in that moment the Qi is mobilized. It exists as potentiality, without expression. In Superconsciousness we can be aware of many things simultaneously, so the movements that emerge from that are guided by a more expanded Knowing. This is Wei Wu Wei, and the effortless power that is produced can seem quite magical.

When you can be properly aligned and can be still
Then, you can be settled.
With a settled heart/mind in your center,
Your ears and eyes are acute and clear,
Your four limbs are hard and strong,
You are able to become a dwelling for essence.
This essence –
Is essence of Qi!

The moving meditation in this video is a way of bringing awareness to Wu Wei and Wei Wu Wei: