I just posted this video from last October’s visit to legendary Wudang Mountain, the highlight of our trip. In it, Master Yang and I perform the first section of the Wudang Mountain Tai Yi Wushingquan, a form that he learned from an old monk during an earlier visit to Wudang. There appears to be several forms with that name, and I don’t know the provenance of the one we’re doing. A great effort was made to restore the Wudang tradition after it had been nearly destroyed during the cultural revolution.

Wudang is the spiritual home to Daoism and the Chinese internal martial arts. The legend says that Daoist immortal Zhang Sanfeng created taijiquan after seeing a crane fighting a snake. Another version appears in an article by Fabio Smolari on the Taiji Forum website:

The first reference to Zhang Sanfeng as the creator of a martial art is the inscription on Wang Zhengnan’s tomb (Wang Zhengnan Muzhiming) in 1669 (Qing dynasty). Wang Zhengnan (1616-1669) was born in Zhejiang province, Yin County. He taught his art to Huang Baijia, whose father, Huang Zhongxi, composed the inscription.

“Shaolin is famous all over the world for its boxing art but it mainly uses attacking for fighting and the opponent could take advantage of this. There is a so-called neijia that originates from Zhang Sanfeng of the Song dynasty. Sanfeng was a master of inner alchemy on Mount Wudang. Emperor Huizhong asked for Zhang Sanfeng to call on him, but the road was blocked and Zhang couldn’t get through. That night Zhang dreamed of Xuanwu Dadi (A Taoist God – The Great Dark Martial Emperor). Xuanwu showed Zhang the methods of a boxing system. The following day Zhang Sanfeng found that he was able to single-handedly defeat 100 bandits. His art spread across Shaanxi with Wang Zong becoming the most prominent practitioner. Chen Zhoutong of Wenzhou was taught by Wang Zong and he, in turn taught it to others in his town, thereby spreading it through Wenzhou. In the Jiajing era Zhang Songxi was the most famous.” (Ma Xianda. Zhongguo Wushu Dacidian p447)

There are several Daoist temples and martial arts academies at Wudang and we got a chance to meet and share with some of the monks and students. 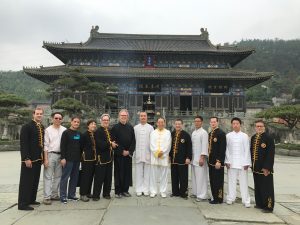 Tai Yi in the title refers to the “Great Unity,” Wushing is the Five Elements, and quan is “fist” or “form.”