Yin Power in the Legs for Health and Gongfu

Last fall I injured my knees. Both of them.

It would be easy to say that most of the damage was done playing tennis, at least in the short term. I like to play as often as I can, and I like to play hard. The public courts are all concrete, and that is not very forgiving. But I also have to give some credit to all the injuries and pounding they have taken during seven decades of various sports and some dubious decision-making. Both knees have received some surgical repair during that time.

It was in November 2020 that I had to stop playing for weeks. Both knees swelled up and the pain was excruciating, even when I was resting. I thought surgery would be inevitable, and so I consulted an orthopedic surgeon for a medical diagnosis: osteoarthritis and torn menisci. Osteoarthritis is the most common form of arthritis. It occurs when cartilage at the ends of bones wears down. The meniscus is a thin piece of cartilage that cushions the tibia (shinbone) from the femur (thighbone).

The doctor recommend not doing meniscus surgery since the osteoarthritis would probably require  knee replacement at some point anyway, just not yet. It was a “bad news/good news” situation: “Yes, your cartilage is wearing out and your menisci are partially torn, but not bad enough for surgery yet.”

I chose to be encouraged by this news, particularly that further damage would not result by normal activities, and that exercise would help. I began an aggressive program of knee rehab that included ice for the swelling, far-infrared heat (once the swelling came down), ultrasound therapy, light therapy (both cold laser and red light), compression sleeves for both knees when playing tennis, and exercises to strengthen the supporting muscles.

It took a few weeks, but I started to notice improvement. I built on that and am now back to playing tennis three or four times a week. There is no pain under normal conditions. And my legs are stronger than before the injuries.

There is one simple leg exercise that really helped me, and I would like to share with you. While it was really effective in stabilizing and protecting the knees while they healed, that is not my primary motivation for sharing it. Even more important:

It will make your Taijiquan better.

Weak legs lead to many injuries, and lot of those come from cheats we have adopted over the years to compensate. When we don’t trust our legs to keep us upright, we try other things. Often, those solutions result in pain and injury in other parts of the body.

Learning Taijiquan requires discarding inefficient physical patterns and replacing them with better ones. For example, taking a step slowly and deliberately requires supporting the body on one leg for a short period of time. How do we maintain root and Central Equilibrium when supported by only one leg?

One common “solution” is to shift weight by locking the hip joint and pushing the butt to the side. My students playfully call that “jutting butt syndrome (JBS).” (See “Setting the Knee, Part 2“) 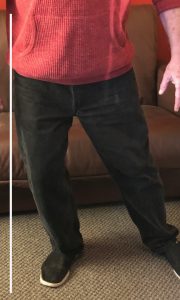 JBS is widespread, even among experienced Taiji practitioners. But ANY such lateral movement of the pelvis makes Song Kua virtually impossible. That lateral shift locks up the hip joints and the center of gravity moves to the outside of the foot. The muscles of legs, buttocks, and back must contract to support this unbalanced configuration. It becomes difficult to establish Central Equilibrium. There is no root. When a cheat like this becomes habitual over time, physical problems will result.

For years I have shown students how to load the substantial leg by first releasing hip tension and then spiraling down in the opposite direction of where the waist will be turning. That is, if I plan to turn to the right, I will first spiral down to the left to load the supporting leg. This unlocks the hip and allows for a fluid turn. Yet, even when students would know this information, they had a hard time trusting the process. Why?

It has become clear to me that the biggest impediment is weak legs. I saw it in myself when I was nursing my knee injuries. When there is pain or weakness, the body seeks a “workaround.” It wants to get the job done, but also avoid pain. When done over time, bad habits result.

The power I am talking about here is of a different sort than is addressed through common forms of exercise, like walking running, swimming, cycling, and yoga. It is a “soft power”: a receptive, Yin power. To illustrate, one student was an ex-power lifter and competitive body builder. He had been able to squat 700 pounds at one point. But he found it excruciatingly difficult to stand with released hips. Relaxing into a Song posture for even a short period almost brought him to tears. He had only trained the muscles that allowed him to push heavy objects away from the earth, not receive the load. His body didn’t know what to do with this new experience.

It is a different kind of strength that allows you to receive force than to push it away. If you are supporting a large mirror, for example, when it tips your way, you want to catch it, not push back. You intercept with your hands and allow the weight of the glass to be gently received by your arms and body. That is different from the Yang power needed to push a stalled car to the side of the road. 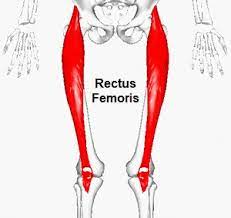 The Yin, receptive power of the legs must be developed to allow the rest of the body to relax. The large quadricep muscles do most of the work. One of the quads, the rectus femoris, gets very little practice in that capacity. The books mostly say that it is used to lift the leg or to kick. Soccer players and cyclists often use it in a Yang way, pushing away, but few people do much Yin loading. Even if you practice standing postures, the load will often go to the outside of the leg, the vastus lateralis, the largest of the thigh muscles. That leads to JBS.

As you can see from this image, the rectus femoris is the only one of the quads that connect the patella (kneecap) with the hipbone. I found that strengthening this muscle stabilized my knee and allowed for a deep release of the hip muscles (Song Kua). More important, establishing a powerful foundation made it much easier to confidently release tension throughout my body, even while placing demands upon it.

Just doing squats or cycling won’t necessarily develop Yin leg power. We have to control the placement of the knee and hips in order to isolate the rectus femoris. It may take patience and humility, since you might not be very good at it at first. Many people alter the exercise and the muscles addressed rather than deal with the effort needed to get it right. But it’s worth it.

You will need a chair or table or the like to support you as learn how to do it. ALL your weight will be supported by one leg as you sink into it, and that is quite challenging for most people. All too often, other muscles will activate automatically to protect us from falling, even when the threat is not real. The chair back acts like training wheels on a bicycle. It gives you confidence while you learn this new skill.

The key is setting the knee as you release the thigh. Don’t allow the knee to push forward, or worse, to the side. That would turn a very helpful exercise into something potentially harmful. To check your knee position, it may be helpful to press it into part of the chair or some other solid object. Keep it set as you drop down and come back up. 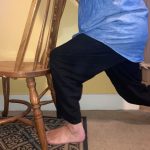 Use a chair to learn to set the knee.

Keep the shin almost perpendicular to the floor. Slightly forward of vertical. For this exercise, allow the weight to settle into the heel. I know that I emphasize the ball of the foot in all things related to internal power, but this is different. This is straight muscular development, and the improved structure will greatly enhance your body’s ability to circulate Qi.

Lastly: DON’T OVERDO IT. Think in terms of months rather than minutes. Most people will find these muscles underdeveloped, regardless of what other exercises they do. Think of that as an opportunity to take your game to a whole new level.

Work to set the knee even more than I do in this video. I like to do ten slow reps each leg, pausing to feel the Song at various points. Try doing a few sets a day.

Go only as deep as you feel safe. If there is knee pain, then back it off and develop the muscle more before going deeper. I have found that slow, careful progress has been very therapeutic for my knees, and has significantly improved my Gongfu.

Let me know how this goes for you. Love to hear from you.